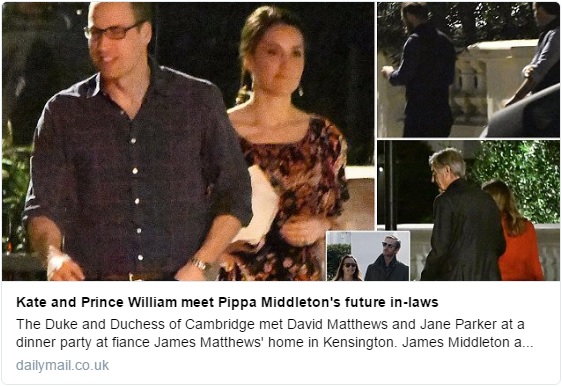 I’m quoting parts of the DM article that goes with these photos, because there’s some gems. But I’m leaving out chunks because I don’t care about James’ brother.

“As the best-selling author of a book on party planning, organising her own wedding should be a doddle. But Pippa Middleton is clearly taking no chances. With her own big day just seven weeks away, the bride-to-be hosted a pre-wedding summit to introduce sister Kate, the Duchess of Cambridge, and husband Prince William to future in-laws David Matthews and Jane Parker. […]

“Pippa and Kate’s brother James Middleton, 29, also attended the South Kensington party, as did James Matthews’s brother, reality TV star Spencer, 27. Pippa and Kate’s parents Carole and Michael Middleton were not at the dinner but they are fond of their future son-in-law and approve of their daughter’s choice.

“The wealthy hedge fund manager shares her love of sport and is well-known for his discretion. Former racing driver James, 41, has known Pippa, 33, for more than a decade, though their romance did not take off until 2015. He is well acquainted with the Duke and Duchess already and is close to Carole Middleton, whom he flew to the Caribbean on his private jet last summer.

“Carole and Michael will host the reception for 150 people in a marquee in the grounds of their £6 million, 18-acre property in Bucklebury next month. The ceremony will take place at nearby St Mark’s Church in the private estate surrounding Englefield House, owned by Richard Benyon MP. […]

“David Matthews and Jane Parker first met Pippa’s parents while they were holidaying at the exotic five-star Eden Rock hotel in St Barths, which is owned by the Matthews family. Swimwear designer Melissa Odabash, who has designed a special bikini for Pippa, says Pippa and James will head to the family’s Caribbean resort for a pre-wedding honeymoon so they can top up their tans ahead of the May 20 wedding. […]

“Last week, the Duchess of Cambridge appeared to be carrying a white package home from the get-together evening. Royal watchers speculated that it could contain an outfit for her daughter Princess Charlotte, who will be a bridesmaid at the wedding.”

Pippa the “best-selling author” made me chuckle. Weren’t her sales so low that she didn’t even make back her advance? I also chuckled at “a pre-wedding honeymoon so they can top up their tans”.

You can see the photos of William and Kate here.

Kate wore a floral dress with black pumps and a ponytail. The dress is one we’ve not see Kate wear before, the Somerset by Alice Temperley “Peony Off The Shoulder Dress” (£99.00). The Peony print also comes in a £69.00 shirt and £79.00 skirt. 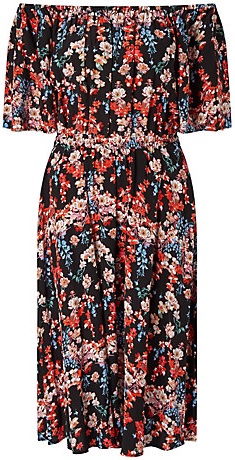 I think her hair looks nice here and wish she’d wear it like this to engagements more. I also like that the neckline is much more open than we are used to seeing from Kate now, but the dress itself is not to my taste – I just don’t like florals.

William & #PrincessKate went to a dinner party at Pippa's place! I think this is the 1st paparazzi sighting of 2017? https://t.co/COFjUGFbq8 pic.twitter.com/oRfGsVYdC3