Over a week ago, we realized that, according to the official British royal website, The Queen has approved the nomination for Kate Middleton to have a membership to the Tuvalu Order of Merit. I’ve been waiting since then for something to come out in the mainstream press about it, and finally the Express has a story about it. But still very little is known about this honor Kate is to receive, so I’ve scoured the interwebs to find what little information I could. 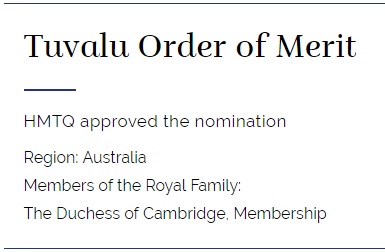 As we learned back on March 23, the above had been added to Kate’s list of patronages under the Charities and Patronages list of the British royal website: the HMTQ approved the nomination of The Duchess of Cambridge for a membership to the Tulavu Order of Merit in the region of Australia. This note is currently still up online for Kate, but not for William.

The Express has additional information about the Tulavu Order of Merit and how both Kate and William are to receive it.

“Discussions are under way for William and Kate to be invited to an investiture in London to each receive the Tuvalu Order of Merit in recognition of their 2012 visit to the Polynesian nation of nine tiny islands with a combined population of 11,200 spread over 10 square miles. […]

“Tuvalu’s honorary consul in London, Dr Iftikhar Ayaz, confirmed that the couple have now been honoured almost five years later to recognise the joy that their visit brought to Tuvalu.

“‘Whenever they have been reminded about it, they have expressed great affection and love for the country,’ he said. ‘They had a lovely time there. They will remember that visit for a very long time.’

“‘I have written to the Queen’s private secretary, Sir Christopher Geidt, asking if he will present the Duke and Duchess with the medals,’ he said.

“He explained that the Order of Merit was his country’s highest award and formed part of a new honours sytem set up last year to be independent from Britain’s twice-yearly awards which previously included people honoured in Tuvalu, one of the 15 overseas realms where the Queen is head of state. The Queen approved the honour on the advice of her government ministers in Tuvalu, who made the awards on the national day, October 1, last year. But it seems nobody outside of the Royal Household noticed until this week.

“A Kensington Palace official said the royal couple were honoured to have been awarded the Order of Merit.”

“I want to extend special words of thanks to the Governor General who is representing the Queen of England for providing the special medals, the Tuvalu Order of Merit. Therefore I would like to congratulate all of you who will be awarded with this medal. Thank you for your contributions to the nation, your contributions have been appreciated through this medal.”

The Government of Tuvalu’s 2017 National Budget, which was presented on November 30, 2016, outlined $30,000 for the creation and distribution of the medals under “Goods and Services”. The emphasis is mine.

“Government has committed the following additional resources to policy priorities within the Ministry in the 2017 Budget. The additional funding reflects the impact of the increase in the Governor General Salary and Acting Allowance. Increase funding of $30,000 will be provided for Tuvalu Order of Merits.”

So basically, the Tuvalu government is spending $30,000 in 2017 to create an independent honors system which was established upon the 38th Independence Anniversary in October 2016, and they’ve decided that, among the people who have contributed to Tuvalu that will receive the Tuvalu Order of Merit, they would like to honor William and Kate with the medal as well.

For reference on government spending on Orders, I tried to find out how much the UK government spends on the Orders they give out each year, but I couldn’t find a number for it.

In terms of what kind of honor this is – whether it is an Order like the Order of the Garter or a Medal like the Queen Elizabeth II Diamond Jubilee Medal – I haven’t found much information. There is a ribbon on offer at the Worcestershire Medal Service, in sizes 38mm (about 1.5 inches) and 32mm (about 1.25 inches), for the Tuvalu Order of Merit. And since Dr. Iftikhar Ayaz in the Express article called them “medals”, I think that the Tuvalu Order of Merit, despite it’s name, is more like a Medal than an Order. 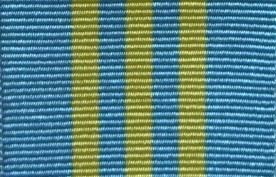 So will we ever see Kate wear the Tuvalu Order of Merit? I would be very surprised if we do. Firstly, although I have no confirmation of this, I think the Tuvalu Order of Merit is a medal like the Queen Elizabeth II Diamond Jubilee Medal, which Kate already has and never wears. Unlike the royal men, the royal women don’t wear their medals – the first photo below from the Afghan Iraq Service of Dedication shows the men wearing their various medals while the women do not wear theirs. So, if this is a medal, we won’t ever see Kate wear it.

Secondly, usually an order from another country is only worn when the royal is either visiting that other country or is hosting representatives from that other country – the second photo below shows Princess Diana not wearing the Netherlands Order of the Crown to the British Opening of Parliament in 1984 even though she received it in 1982. So, if this is an order, unless Kate visits Tuvalu again or participates in a State Visit from Tuvalu, we won’t see her wear it.

Basically, I would be very surprised if we ever saw Kate wear the Tuvalu Order of Merit (so I don’t think this is a cheap way to give Kate something to wear during white tie occasions). I would be less surprised to see it show up among William’s other medals.

40 thoughts on “Kate & William to receive Tuvalu Order of Merit”