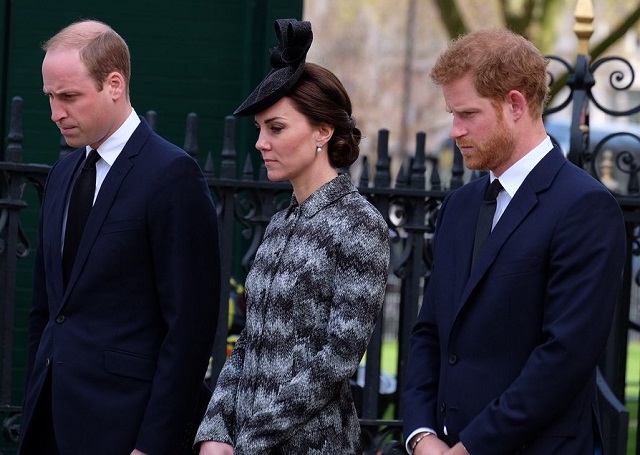 Among the 1,800 strong congregation were the Home Secretary, the Lord Speaker; the Speaker of the House of Commons, and the Mayor of London, as well as families of those injured and service personnel.

The service was taken by the Dean of Westminster, the Very Reverend Dr. John Hall, who said:

“The violent assault two weeks ago against Londoners and visitors to this city from around the world and the killing of a police constable on duty at the Palace of Westminster have shocked people everywhere. Today we remember in particular those who lost their lives: Aysha Frade, Kurt Cochran, Leslie Rhodes, Keith Palmer, their families and friends, and all those who were injured… We give thanks for the vigilance and dedication of the Police and Security Services and we pray for them in their vital work of keeping our communities and nations safe from terror and random violence.”

Upon arrival at the Abbey, William laid a wreath at the Innocent Victims Memorial. The wreath, which was only signed by William, read: “In memory of the innocent lives; lost to us all on the 22nd March 2017”. During the service, William read Luke 10: 29-37.

After the service, the royal trio met privately with families of those killed and injured in the attack, before meeting with first responders.

Here is a video of part of the service.

Here is a video of the first responders meeting after the service.

For the Service of Hope, Kate repeated the Missoni “Long Snake Stitch Coat” she wore to the Somme 100 event on June 30, 2016. Kate’s hat is also a repeat, a Lock and Company hat she’s worn in 2013 and in 2014 at the D-Day commemorations. She wore the Queen’s Diamond Stud and Pearl Drop Earrings. Her shoes are Gianvito Rossi black suede pumps. Kate also wore a black dress under her coat.

The only new part of Kate’s outfit was her clutch. Kate carried the Beulah London Blue Heart Clutch in black croc ($360.58).