Kate attended the opening night of the “42nd Street” revival because Michael Linnit and Michael Grade (the show’s producers), together with The Global Group of Companies for Gate Ventures, will be supporting the nook appeal for the run of the show.

The Nook is a planned new hospice in Norfolk which will replace the Quidenham site in order to accommodate the demand for EACH’s services. EACH currently provides specialist care and support for 351 children and young people with an additional 417 family members receiving face-to-face therapeutic support. EACH is looking to raise £10 million to build The Nook, and need another £5 million to reach their goal.

EACH “supports families and cares for children and young people with life-threatening conditions across Cambridgeshire, Essex, Norfolk and Suffolk. [Their] care and support is tailored for the needs of all family members and delivered where the families wish – in their own home, at hospital, in the community or at one of three hospices in Ipswich, Milton and Quidenham.” 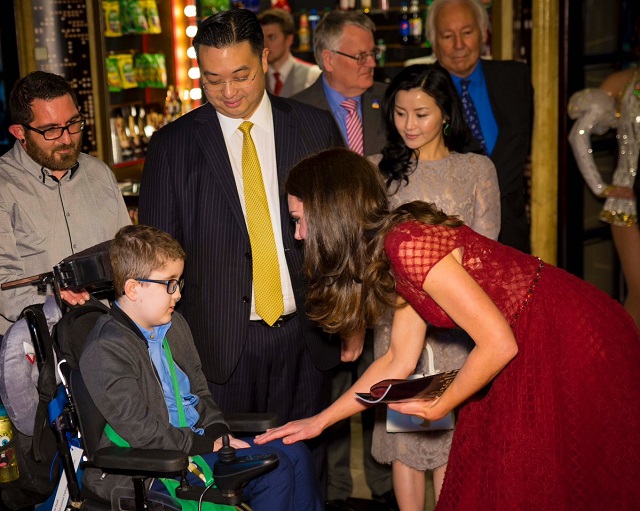 Upon arrival at the theatre, Kate met with the show’s producers, and executives from EACH, before being presented with a program from Ollie Duell, 12, who is supported by EACH. Ollie lives with a complex medical condition that affects his bowel and stomach. In addition, he has an underactive thyroid, juvenile arthritis and sleep apnoea. He can walk short distances, but often needs an electric wheelchair. You can read more of Ollie’s story here. 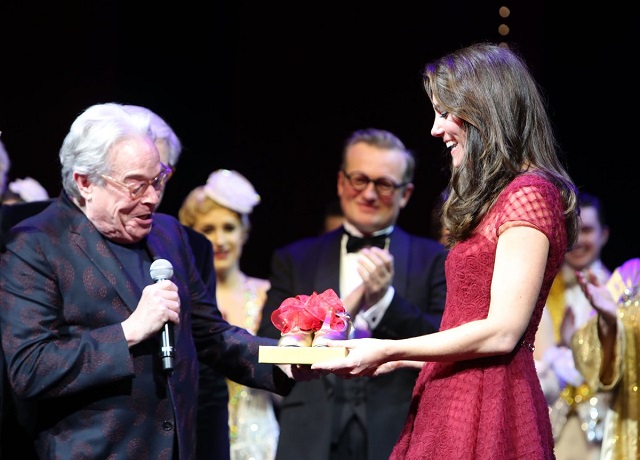 Kate chose a new-to-her designer for the evening: Marchesa Notte – which is Marchesa’s cheaper diffusion line, although still vastly over-priced. Kate chose the “Embellished Tulle Midi Dress” ($1,195) in “Claret” which features lattice and rosette motifs, a fit-and-flare design, and a crystal-embellished waist. Kate’s dress has been altered slightly to add longer sleeves than the original cap sleeve.

As much as I hate Erdem, I hate Marchesa even more – I think all their designs are cheap-looking, fug garbage – so while this is one of the least terrible Marchesa dresses I’ve seen, it’s a no from me. If it didn’t have the lattice and rosettes, then maybe it would have worked for me because I do like the silhouette, but as it is now I dislike it. 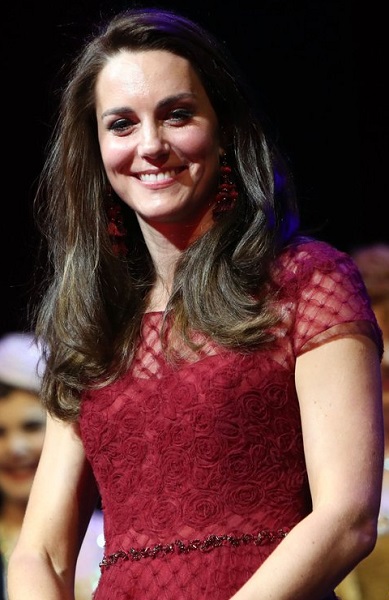 Kate debuted new earrings, too, the Kate Spade “Pretty Pom Tassel Drop Earrings” ($98). These look like they should cost $5, not $98. These are a no from me as well.

I don’t have the same aversion to the monochromatic look that a lot of you guys have, so I don’t mind the matchy-matchy red of the dress, earrings, red Mulberry Bayswater Cluch, and Gianvito Rossi bordeaux suede pumps. As always, I love the red clutch and shoes, I just can’t stand the dress or earrings.

215 thoughts on “Kate in Marchesa for 42nd Street opening night”