Kate wows in blue Jenny Packham on Day 1 in Paris

After stopping by the Irish Guards, Prince William and Kate Middleton flew to Paris to kick off a two day trip. 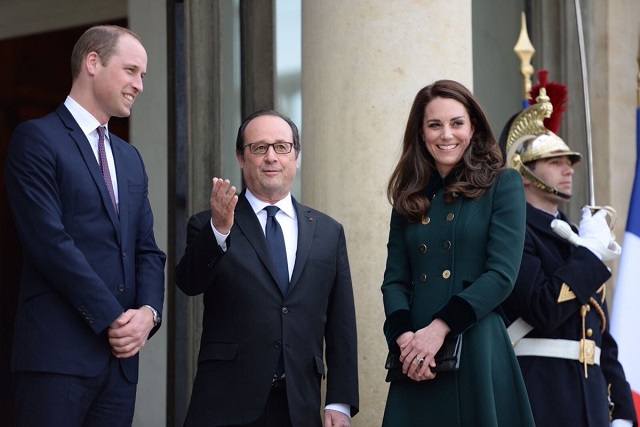 William and Kate made their first stop at the Élysée Palace for a meeting with French President Francois Hollande.

From the Express (typos are theirs):

“President Hollande remarked that the couple were going to watch the rugby the following day, to which William replied ‘Yes, to cheer on the Welsh’, and made a small gesture of enthusiasm wth his hands. Kate asked the President whether he enjoyed watching rugby – but he suggested he was not a fan.

“William seemed rather ill-at ease during the meeting but aides said his slightly stiff demeanour would have been due to the formality of occasion. After a few seconds the media were ushered out and the prince, duchess and president enjoyed more than half an hour of bi-lateral talks.” 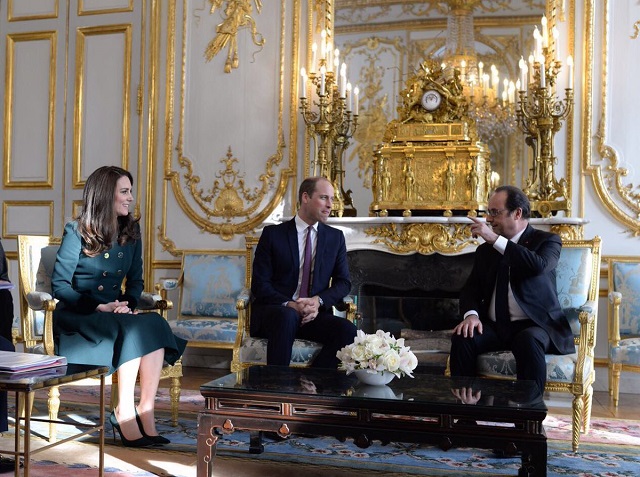 Kate, surprisingly, didn’t change between the Irish Guards visit and the meeting with Hollande, wearing the same Catherine Walker coat, Cartier watch, Monica Vinader earrings, and Gianvito Rossi pumps. She did let down her hair, take off her hat, and take off the shamrock brooch, though.

William and Kate then traveled to the British Embassy in Paris for a reception. The event is launching “Les Voisins” – a celebration of UK and French links. William gave a speech highlighting the ties between the UK and France. For space, I’m only quoting parts of William’s speech.

“So much of our countries’ histories, culture and language are intertwined. Those ties of neighbours which run through our history are as powerful today as they have ever been. Most fundamentally, our nations share a set of common values: democracy, free speech, the rule of law, among many others. […]

“Catherine and I have been honoured to meet many of you tonight. You have all been invited because you remind us that our two nations also share something else in common: talented, creative young people who are already shaping the world around us – whether in science, music, film, commerce, politics, sport, academia – I could go on, as this list touches practically every area of our national lives.

“Like all neighbours, sometimes our two nations encourage each other through mutual support. Sometimes we attempt to outdo the other through rivalry – as we will see tomorrow when Wales play France at the rugby. But always our two nations continually inspire one another to become better: more creative, more prosperous, more innovative.

“This partnership will continue despite Britain’s recent decision to leave the European Union. The depth of our friendship and the breadth of our cooperation will not change. So I am proud to be here this evening with you to launch Les Voisins to recount those ties and to strengthen them even further.” 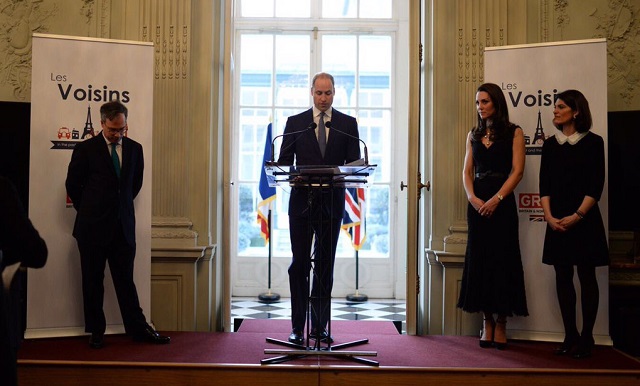 Kate made a wardrobe change for the reception, opting for a bespoke black Alexander McQueen dress. Kate debuted yet another pair of Gianvito Rossi pumps, this time the “Ankle Strap Suede D’orsay Pumps” ($800). These are different from her other Rossi pumps in that they have a chunkier heel and an ankle strap.

Kate chose her Balenciaga earrings again, as well as a pearl cocktail ring and a necklace with four large pearls (which may or may not be part of a matching set). She also wore her Cartier watch.

I like the outfit from the waist up, but I dislike the length of the dress – I think it cuts her leg at an odd length, and the ankle strap doesn’t help.

The evening ended with a gala dinner at the official residence of the British Ambassador to France where William delivered a message from QEII and Kids United sang “Happy” to William – the song William danced to in Verbier. 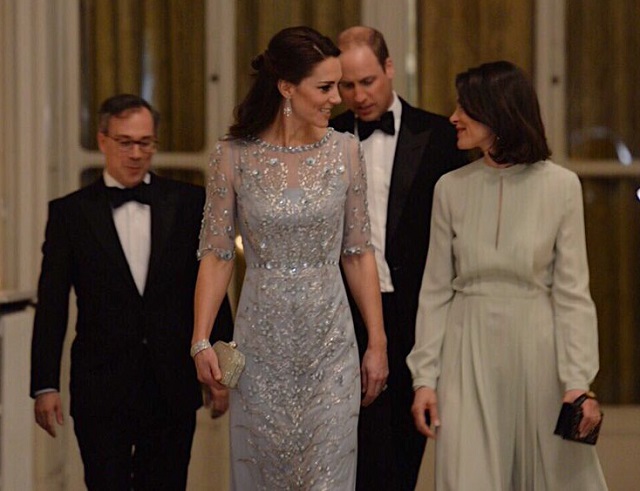 Kate debuted her third garment of the day with this ice blue Jenny Packham gown with intricate floral beading and sheer, elbow-length sleeves.

Kate brought back her Oscar de la Renta Platinum Lamé Cabrina pumps she debuted a couple weeks ago, and her Jenny Packham Casa clutch which debuted some time ago.

I think Kate looks very pretty here, although this isn’t one of my favorite dresses (too much floral for me). It’s always nice to see the Queen’s jewels, and I still very much want those shoes.