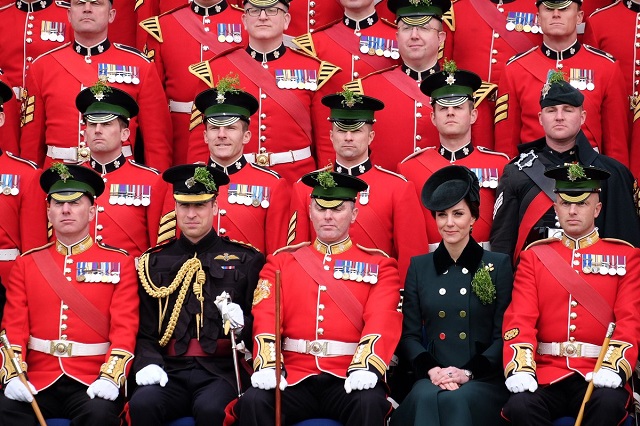 William, who is Colonel of the Regiment, and Kate were at Hounslow visiting the 1st Battalion Irish Guards and watched their annual parade, and Kate handed out shamrocks to the Guards.

The Irish Guards were formed by Queen Victoria on April 1, 1900 in recognition of the Irish soldiers participation in the Second Boer War. The wolfhound mascot was first presented in 1902, and their current mascot is named Domhnall.

Kate pinned a shamrock sprig on Domhnall, who never seems to like Kate very much.

I like parts of it. I love the color and the cut; I think it fits Kate very well. But I can’t stand the shiny buttons, and I don’t particularly care for the fake pocket flaps or the collar. I’m not one to usually care about Kate’s color-coordinating or care about the colors not matching, but the different greens between the coat, earrings, and shoes are giving me pause today. Overall, I think Kate looks really nice here, but I would do some tweaking.

Kate has a very similar Catherine Walker coat which she wore on arrival in New Zealand in April 2014.

Kate wore the Irish Guards Gold Shamrock Brooch, her Cartier watch, and her Monica Vinader “Siren Wire Earrings” in Green Onyx which she debuted in Canada.

Kate’s hat looks ridiculously similar to the green Lock and Company hat she wore on Christmas 2015. It’s the same green shade, overall saucer shape, and poinsettia on the side. But the Christmas 2015 hat is pointed whereas this one is rounded. I know I was a bit of a Kate-apologist when it came to Kate’s two Rebecca Taylor blue suits, but for this one I think it is ridiculous if Kate bought a second green hat that is so similar to the first one that she’s only worn once. But it wouldn’t shock me if she did.

Kate’s green suede pumps are Gianvito Rossi. They are new. Kate also carried a clutch which I haven’t seen good photos of yet.

An update on Kate’s schedule:

On March 23, Kate will attend the launch of a series of Best Beginnings maternal mental health films with Heads Together at the Royal College of Obstetricians and Gynaecologists. Kate is supposed to make a speech at this engagement.

Photos of Domhnall, because he’s the best.