Kate at Ronald McDonald House: ‘Having a baby is a life-changing moment’

Fashion Jewelry Kate Middleton
March 1, 2017February 28, 2017 by katemiddletonreview141 Comments on Kate at Ronald McDonald House: ‘Having a baby is a life-changing moment’ 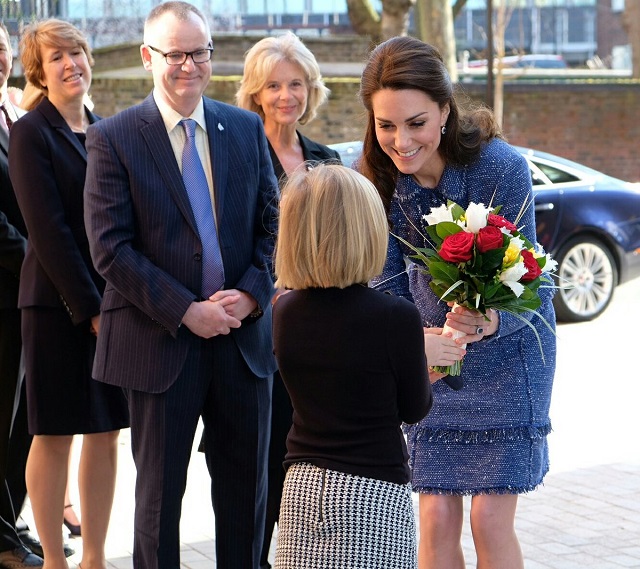 Kate was at Ronald McDonald House Evelina London to officially open the new 59 bedroom, purpose-built free ‘home away from home’ for the families of children being treated at the Hospital. Ronald McDonald Houses offer comfort, support, and a safe environment where families can interact, share their experiences and know that they will always have a shoulder to cry on. They host events and workshops to keep them strong and hopeful.

Upon her arrival, Kate was presented with a posy by Isabelle, 8, whose brother Luke, 6, is staying at Evalina Hospital. Kate then toured the facility and met families who stay there, including Dion and Danielle and their 8-month old baby Mia who has been at the children’s hospital for over 7 months because she has had renal problems since birth and both her kidneys have been removed.

After hearing about Mia, Kate told her parents: “Having a baby is a life-changing moment but for you having to go through all that as well is extraordinary.” 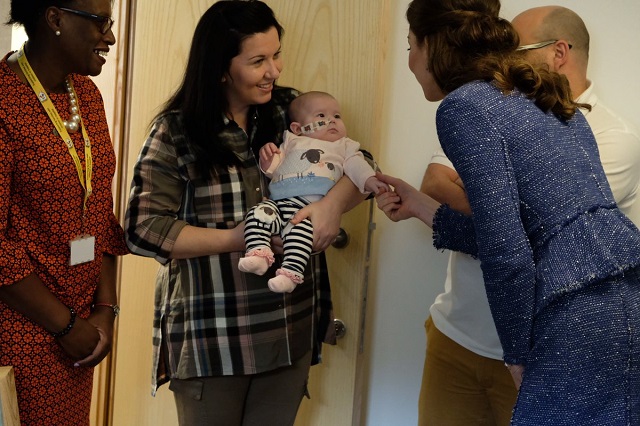 Kate then stopped by the kitchens to meet families who use the service, where children were taking part in crafts and decorating pancakes (yesterday was Pancake Day). To 4-year-old James, whose baby brother Lewis was in intensive care having been born six weeks ago at just 23 weeks, Kate spoke about George and how he was making pancakes at school.

“In the kitchen of the Ronald McDonald Evelina House, James asked her: ‘Where’s George today?’

“Kate laughed and replied: ‘George? I should have brought him. He’s at his Montessori nursery today making pancakes.’

“James then returned to his colouring-in but told Kate: ‘There’s a thunderstorm coming.’

“Kate replied: ‘Yes I know all about those. George likes storms too.'” 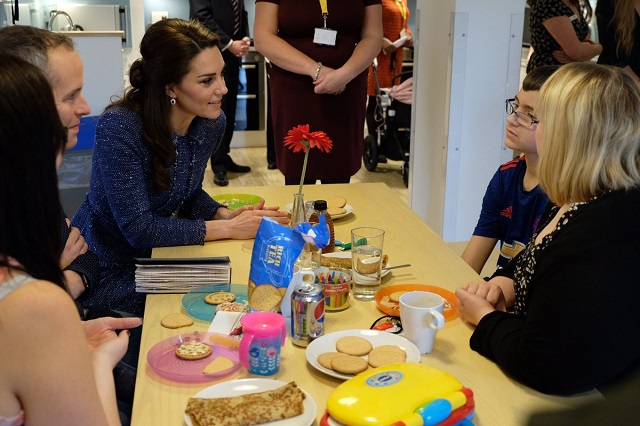 Finally, Kate also met staff and was briefed about the work of Ronald McDonald House Charities and what the new House will mean to the families and children being treated at Evelina London.

Kate wore a blue Rebecca Taylor sparkle tweed outfit for her jaunt to the Ronald McDonald House. But as much as it looks nearly identical to the Rebecca Taylor sparkle tweed outfit she’s worn previously, Kate opted for a new one because she’s the type of person who buys two pairs of nude pumps whose only difference is .6-inches in the heel and debuts them days apart.

Kate went with a hairdo I’ve never seen before. It’s a half up/half down look but the up part is in the form of one of her boring updos.

Here’s a shot of Rebecca Deacon. It’s not a full view, but she actually looks nice from what I can see.

141 thoughts on “Kate at Ronald McDonald House: ‘Having a baby is a life-changing moment’”