Kensington Palace officially confirmed that Prince William will leave his co-pilot job with East Anglian Air Ambulance this summer, and starting in the fall will spend more time working for royal family. Kate Middleton will also increase her work for the royal family, while Prince George and Princess Charlotte attend school in London.

“Since 2014 The Duke and Duchess of Cambridge have used Apartment 1A at Kensington Palace as their official residence when carrying out Royal duties, while basing their family primarily at their home in Norfolk. This arrangement has allowed The Duke to work as a pilot with the East Anglia Air Ambulance, a role he has valued hugely. Their Royal Highnesses love their time in Norfolk and it will continue to be their home.

“From this autumn, however, The Duke and Duchess will increasingly base their family at Kensington Palace. As they have in recent years, Their Royal Highnesses are keen to continue to increase their official work on behalf of The Queen and for the charities and causes they support, which will require greater time spent in London. Prince George will begin school in London in September and Princess Charlotte will also go to nursery and eventually school in London as well.

“His Royal Highness will finish his role with the EAAA in the summer in line with his commitment to fly with them for two years. The Duke said:

“‘It has been a huge privilege to fly with the East Anglia Air Ambulance. Following on from my time in the military, I have had experiences in this job I will carry with me for the rest of my life, and that will add a valuable perspective to my Royal work for decades to come.

“‘I would like to thank the people of East Anglia for being so supportive of my role and for letting me get on with the job when they have seen me in the community or at our region’s hospitals. I would especially like to thank all of my colleagues at EAAA, Babcock, and Cambridge Airport for their friendship and support. I have loved being part of a team of professional, talented people that save lives every day. My admiration for our country’s medical and emergency services community could not be any stronger.'”

It is worth noting that KP did not expressly say that William or Kate would be full time working royals. All KP said is that William and Kate will increase their official work. By how much remains to be seen.

This statement is great and all, and I hope William and Kate follow through with it, but I’m wondering how much they will actually increase their workload this year. I could totally see them claiming they need time to prepare to “move”, William needs more time to devote to EAAA before leaving, they need to spend more time with the kids preparing them for school and the change of living more time in London, etc. I could see them working less this year than previous years because of this change, and not actually starting to increase their workload until 2018. But we’ll see. 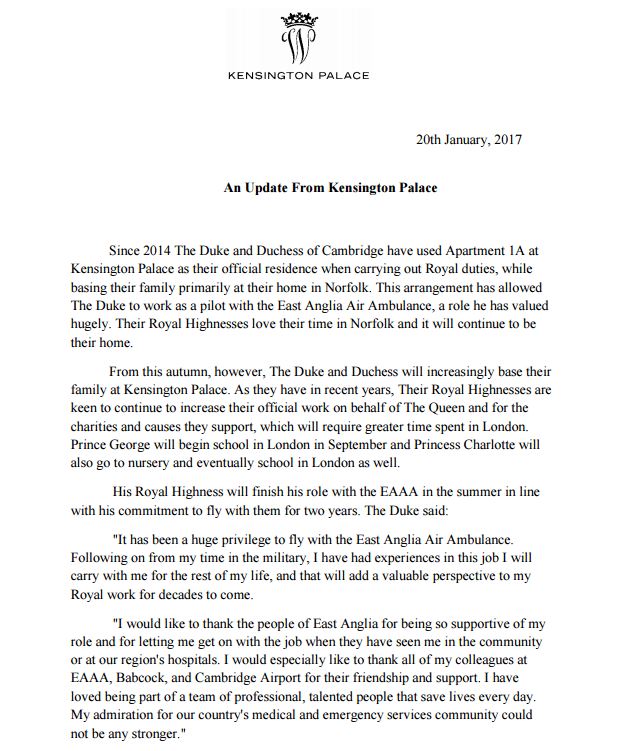