Kate Middleton, as a Volunteer with the Scout Association, visited the Cub Scouts last night, December 14, to mark their 100th anniversary.

In the evening of December 14, Kate visited 24 Cub Scouts in Kings Lynn, Norfolk and took part in a variety of skills-based activities with the kids. Kate arrived and immediately took part in some classic parachute games, which are designed to develop teamwork and cooperation skills.

The second activity Kate joined in with was a cupcake decorating activity where Kate and the kids iced cupcakes. During the cupcake activity, Kate, according to the Express, said: “Who wants the pink? No one… its me then.” 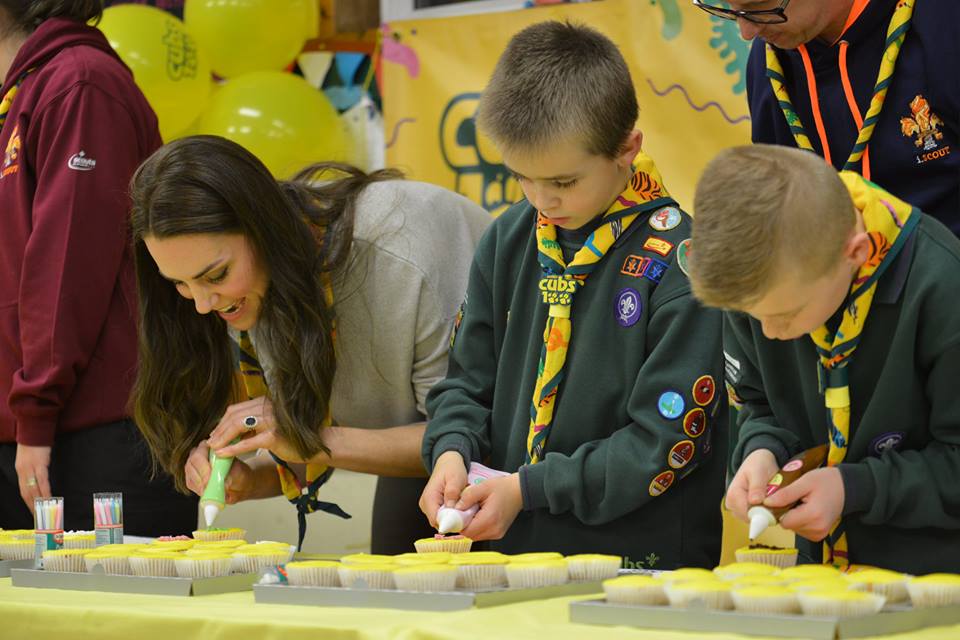 Kate then took part in a character skills activity to help confidence and positivity. The Cubs were encouraged to write down what they did best and how they help other people. Kate said, “I’ll have a go but I think it’ll be a short list!” before writing “bonfire building”. Not what I would have expected her to write.

Kate took part in a first aid skills activity where her arm was wrapped up in a sling made out of a scarf. Kate also sang “Happy Birthday” with the group, cut a special 100th birthday cake, and recited the Cub Scout Promise.

Kate was presented with flowers, and a beaver bear and club scout bear for George and Charlotte.

Kate has been a volunteer with The Scout Association since 2012 and has done a handful of events with them over the years. Kate’s last event with with them was in December 2014.

The Cub Scouts were originally a boys-only program which officially launched on December 16, 1916.

Here’s a video of Kate’s visit. At the end, she says: “It’s been a real treat for me as well to come to see all of you here and keep up the hard work ’cause you’re doing all the hard work helping other people, helping each other and things so keep it up. And Happy Christmas to you all.”

I know many will disagree with me heavily, but I actually think Kate looks nice here, for a casual look. I’m not a huge fan of Kate’s casual style, but I like this one.

OH, PS. Emily Andrews said on Twitter that William and Kate won’t be releasing any Christmas photos this year. I’m disappointed; I was looking forward to that.

I will cover Victoria and Estelle receiving the firs tomorrow and Camilla’s Christmas party the next day.