This is a royal round up of royal happenings on November 17, because it was a busy day for many royals. The royals I’m covering in this post are: Queen Letizia; Sophie, Countess of Wessex; Princess Charlene; and Prince William. I’m also including a couple polls related to Prince Harry to gauge interest in a couple things – so please be sure to vote. 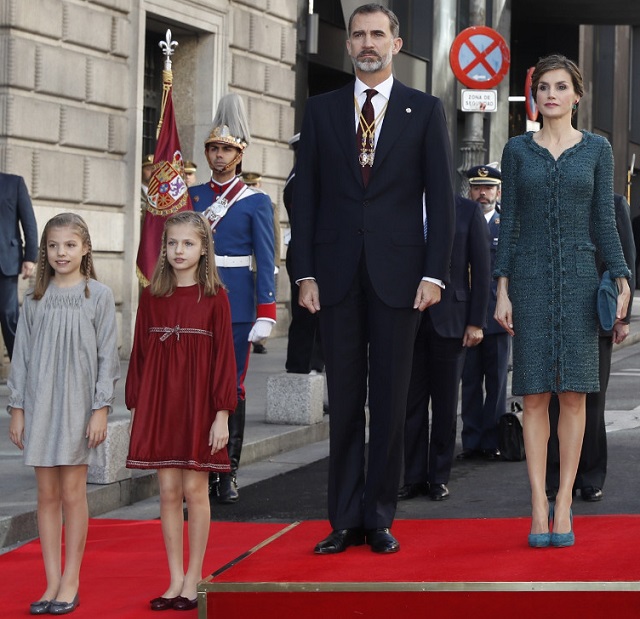 On November 17, King Felipe, Queen Letizia, Princess Leonor, and Princess Sofia of Spain all attended the Spanish Congress’ 12th legislature opening ceremony, a joint session of Parliament, Congress of Deputies, and Senate, held at the Palace of the Parliament.

This officially begins the legislature, just over six months after the dissolution of the Parliament on the occasion of the elections, and about four and a half months after elections were held.

Felipe gave a speech, in Spanish, which you can find here.

Also on November 17, Sophie, Countess of Wessex opened Portesbery School. Portesbery is an all age day school (2-19 years) catering to children and young people with Severe Learning Difficulties (SLD). The school was first opened in 1973 but moved to a brand new, purpose-built location in 2015. Sophie toured the school, unveiled a plaque, and then was presented with a bouquet and some hand-made cards.

Sophie wore a blue Joseph “Lisa Long Cashmere Wrap Coat” which she’s worn since 2013, grey turtleneck and trousers, and the Stefany Jewelry brooch which she received as a gift during her visit to Prague, Czech Republic in May 2015.

November 17 was a busy day. Prince Albert and Princess Charlene of Monaco were also out and about that day, attending the Parcels Distribution At Monaco Red Cross Headquarters, where they presented gifts to the residents of the Monaco.

Seriously, so many royals were out and about on November 17 – I haven’t even covered all of them. But another royal out and about was Prince William, who spent the last two days in Vietnam. William was there to attend the third International Conference on the Illegal Wildlife Trade. William, along with Charles and Harry, attended the previous conference in London in February 2014 – it was the weekend after he and Harry went hunting with Jecca Craig.

Anyway, William gave a speech at the conference. I’m not going to quote the whole speech, since it’s long, but I’m quoting part of it. You can read the full transcript here or watch the 10-minute long speech in the video below. William ended his speech by saying:

“We are all here because we care about saving these animals from extinction and protecting the communities that rely on them and safeguard them. But we know that many others do not share our sense of urgency. In a difficult moment in time, many would ask why this issue warrants priority and effort. I firmly believe that halting the extinction crisis and ending the illegal wildlife trade presents a real chance to demonstrate our collective confidence that we have the power to rise to the big problems of our time. If we cannot tackle this, it is hard to see how we will be effective in overcoming the other global challenges that face us.

“Compared to other global problems, IWT is remarkably uncontroversial – almost everyone acknowledges the need to stop it and everyone acknowledges that the extinction of our iconic species would be a great loss for humanity. It is only a test of will. And compared to other global problems, I really do believe it is relatively straightforward to solve. We know where the animals are that are being killed. We know through which ports, airports, and highways their products are being shipped from killing field to market place. And we know which markets are fuelling the demand for the entire trade.

“We can win this battle. And in doing so we can take a small, but very important step in reminding ourselves that we are capable of rising to the challenges of our age – a message that our young people need to hear loud and clear. I wish you luck for a successful conference. And I thank you for the actions you will take to protect the natural heritage we all want to pass onto to our children and grandchildren.”

I’m actually glad that William addressed the topic of “Why should people care”, because the entire time I was reading his speech I kept thinking, “Why should people care?” I don’t think his answer for why people should care – that it will boost our collective confidence – is going to do anything to make people care, but good for him for acknowledging that he needs to have a reason for people to care about this issue above all the other ones that are pressing right now. Because even if people agree that the illegal wildlife trade is bad, they won’t care enough to do anything if they are too busy worrying about feeding themselves and their families. Seriously, William needs to find a better way of framing this issue to make people care about it. I’ve been saying that for a while, but it’s true. Bringing up Charlotte or saying solving this issue will give us confidence aren’t good enough reasons for the average person to care.

Alright, now to my Prince Harry polls. I have two polls for you guys. These are not so much about fun but about giving me a feel for what you guys want me to cover in relation to Harry.

Harry starts his tour of the Caribbean on Sunday, November 20 and goes until December 4. My first question is how much coverage of this tour do you guys want?

My second question is in relation to the Prince Harry/Meghan Markle romance, because since the last time I covered it there have been about a million new articles all with conflicting information. So, how much coverage of the Harry/Meghan romance do you guys want?