Royal Rewind: The Engagement of Prince William and Catherine Middleton

It has been six full years since Prince William announced his engagement to Catherine Middleton at Clarence House on November 16, 2010. Can you believe that? Let’s rewind the clock six years to take a look back at how that all went down. 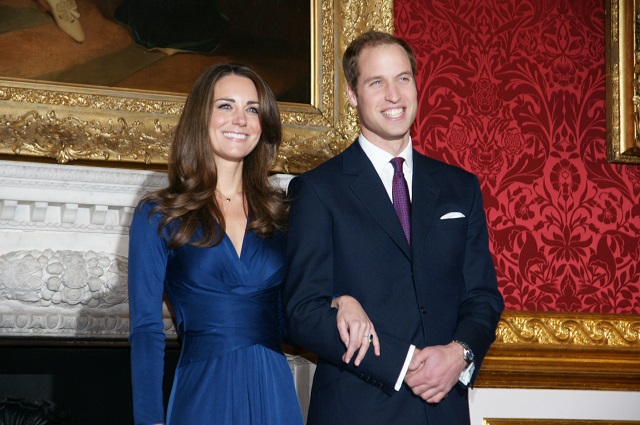 On November 16, 2010, Clarence House officially announced that William and Kate were engaged after eight years of dating. The full press release:

“The Prince of Wales is delighted to announce the engagement of Prince William to Miss Catherine Middleton. The wedding will take place in the Spring or Summer of 2011, in London. Further details about the wedding day will be announced in due course.

“Following the marriage, the couple will live in North Wales, where Prince William will continue to serve with the Royal Air Force.”

At 9:00 AM on November 16, William told his staff that he and Kate were engaged and to arrange a press conference to announce the news. Only then did William call the Queen to inform her of the engagement. William then called his father, Prince Charles, to inform him of the engagement. William then informed Prince Harry of the news by reportedly saying: “You’ve got a sister.” Apparently there was quite a bit of grumbling about the way William handled telling his staff of the news.

The Middletons, however, had known about the engagement for weeks. According to William and Kate, they got engaged in Kenya in October, and William “had been carrying [the ring] around with [him] in [his] rucksack for about three weeks”. According to William and Kate, William proposed to Kate without telling anyone because he had “the realization that [Kate’s father] might actually say ‘no'”, but he “managed to speak to Mike soon after it happened”.

William and Kate went on a shooting trip with Carole and Michael Middleton at Birkhall (Charles’ residence at Balmoral in Scotland) a week after William and Kate returned from Africa. Kate spoke to her mother about the engagement after returning from that trip to Scotland.

In accordance with the Royal Marriages Act 1772, the Queen gave her formal consent to the marriage at the February 9, 2011 Privy Council held at Buckingham Palace.

Some trivia: The Royal Marriages Act 1772 was repealed and replaced in 2013, in accordance with the 2011 Perth Agreement, with the Succession to the Crown Act 2013 which replaced male-preference primogeniture with absolute primogeniture, and removed the requirement of those outside the first six people in line to the throne to seek the Sovereign’s approval to marry.

The press conference was held in the afternoon in the State Apartments at St. James’s Palace. Below is a video of the press conference – just as a warning, there is a lot of flash photography in the video. I’m not going to quote the video but I will offer a couple of thoughts on their answers:

William decided to give Kate Princess Diana‘s engagement ring because, as he said, “this was my way of keeping her close to it all” because “obviously she’s not going to be around to share any of the fun and excitement of it all.”

After Prince Charles got engaged to then Lady Diana Spencer in 1981, Diana chose a sapphire and diamond engagement ring from the Garrard catalogue which cost £28,000 at the time. The ring features a 12 carat oval blue Ceylon sapphire surrounded by 14 diamonds set in 18 carat white gold.

How the ring ended up on Kate’s finger is a slight point of contention. Supposedly it was Harry who picked out the ring originally, but William ended up giving it to Kate. Christopher Andersen wrote in September 2003 issue of Vanity Fair that:

“Four months after the funeral, it was Burrell [Editor’s note: Paul Burrell, Diana’a former butler] who opened the black front door to Kensington Palace and welcomed the boys for one last walk through the apartments they had shared with their mother… Then, as a tearful Harry held on tight to Burrell, they walked from room to room, picking out mementos to take with them to their new rooms at St. James’s Palace. Among other things, William chose the Cartier Tank watch that the Princess always wore – a gift from her father, the eighth Earl Spencer. Harry picked out the sapphire-and-diamond engagement ring given by Charles to the blushing ‘Shy Di’ when she was just 19.”

According to Today, Harry decided that “the ring should be on the finger of the future queen of England and gave it to William to give to his fiancee” but People says “the brothers reportedly agreed that whoever got engaged first would use it.” Either way, the ring was not in Harry’s possession at the time; William took the ring from a royal safe in what has been described as a “cloak-and-dagger” operation.

I’ve read that William did not ask Harry’s permission before taking the ring to give to Kate and that Harry only found out about Kate wearing Diana’s ring when he watched the press conference, but I cannot find any sources for that information other than blogs and forums.

For the engagement announcement press conference and interview, Kate wore a blue Issa Draped Jersey Dress, black pumps, and Cabochon by the Yard necklace and earrings by Elsa Peretti for Tiffany & Co to compliment her sapphire engagement ring.

This dress didn’t make it into my Top 25 Favorites list for some reason but I’ve always loved this dress.

William and Kate sat down with ITN’s Tom Bradby (who is the husband of designer Claudia who worked with Kate at Jigsaw) for an interview about their engagement. The full interview is below. I’m not quoting the whole thing, but here are some thoughts:

This photo amuses me to no end.

242 thoughts on “Royal Rewind: The Engagement of Prince William and Catherine Middleton”