Yesterday, November 3, Kate Middleton attended two events as Patron of Action on Addiction. She attended an event at Working Title and then attended the film premiere of A Street Cat Named Bob.

Before the scheduled film premiere, Kate did a previously unannounced engagement at Working Title (the production company) to hear how The Recovery Street Film Festival was created and to meet the filmmakers and the charities involved.

The Recovery Street Film Festival focuses on filmmakers who have a lived experience of recovering from drug or alcohol addiction, whether it is themselves or a loved one; demonstrating through the medium of film the diverse issues that are faced by people overcoming addiction and how those around them can be affected. The aim is to empower people affected by addiction by giving them a voice, providing a platform for them to tell their own stories of the ‘ups and downs’ and how they reached recovery.

Kate met the filmmakers before screening the short films. Kate also met some of the people who acted in the films, as well as people and donors from Action on Addiction.

Kate then attended the premiere of A Street Cat Named Bob at The Curzon Mayfair. The film opens in the UK today, November 4 (it’s out on November 18 in the US). The film is based on the much-loved, international best-selling book. Starring Luke Treadaway as James Bowen and with Bob as Bob, A Street Cat Named Bob tells the moving and life-affirming true story of the unlikely friendship between a young homeless busker, James Bowen, and the stray ginger cat who changed his life.

Kate met the film’s actors and representatives from Sony Pictures Releasing UK and Action on Addiction, as well as the real life James and Bob, before watching the film.

While also being the world premiere of the film, the event also helped raise funds to support Action on Addiction. I think the money raised by this film is specific to this one event. 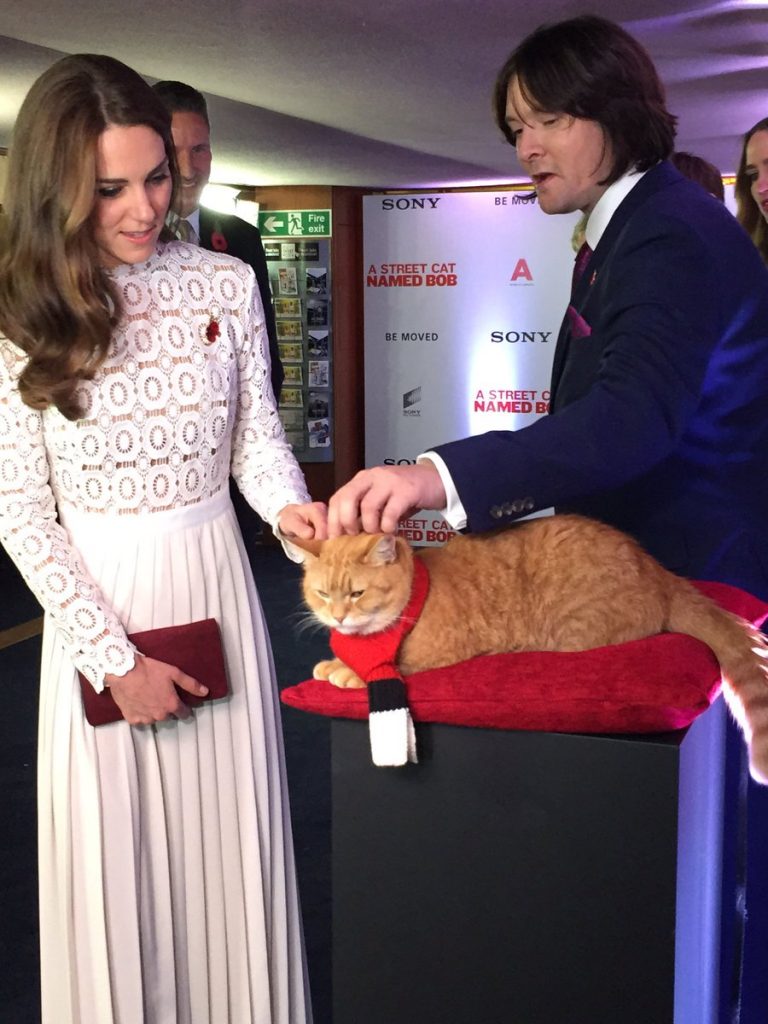 Bob’s entire tail flicked while Kate was petting his head, which means the cat wasn’t happy at all.

? Watch Bob's audience with The Duchess of Cambridge. pic.twitter.com/VYevIWD5Pt

Kate wore a new gown by a new-to-her brand for the day’s events – choosing a white Self Portrait Pleated Crochet gown from the Resort 2016 collection ($640). The dress features a bodice and sleeves of guipure-lace with a high neckline, a grosgrain band a the waist, and a crepe skirt with shutter pleats and a high side slit. There is a tan mesh lining the bodice.

This new dress has several features that are similar to the dress Kate wore to the children’s party in Canada – like the lace only on the top part of the dress and a ruffle at the neckline. I didn’t like that dress and I don’t like this dress either.

The red accessories are an interesting choice. I assume it’s to match Kate’s poppy pin. You guys know how much I love red accessories, but even they are not enough to save this dress in my eyes. I actually probably dislike Self Portrait as a brand in general – I was looking through their designs on their website and disliked all of them.