The end is here! The final day of Prince William and Kate Middleton‘s Royal Tour of Canada is here, and Day 8, October 1, saw William and Kate make quick stops to two charities before sailing in the harbor in Victoria, Canada.

** Note: This is just part of the day. The royals will be leaving Canada later. I’ll either cover that in another post or I’ll update this one.

The first stop was at the Cridge Centre for the Family – a Christian charity which provides a range of services offering support, counsel, education, and training to children and youth, seniors, and women who have experienced domestic violence.

Outside the center, William and Kate were greeted by BC Premier Christy Clark, who gave them personalized ‘Canucks’ Vancouver hockey team jerseys for Prince George and Princess Charlotte.

Speaking of George, Kate said that pizza and pasta are his favorite foods – after a woman she was speaking to said she loved cooking pizza and pasta. From the Express:

“At the centre, Kate, 34, chatted to Zola Auld, a 20 year old with Down’s Syndrome. When Zola said she liked cooking pizza and pasta, Kate said it was George’s favourite.

“Zola’s mother, Anne Auld, said the centre had provided invaluable support to them as a family, adding ‘It’s been a dream come true meeting the Duchess.'”

While at the center, William and Kate unveiled the Overcomer’s Monument dedicated to people who have overcome difficult circumstances.

While chatting to the crowds that had gathered, William told one little boy with a broken arm that George loves toy tractors. So add pizza, pasta, and toy tractors to the list of things George loves (Is someone keeping a list? Because I don’t even remember all the things they’ve said he loves). 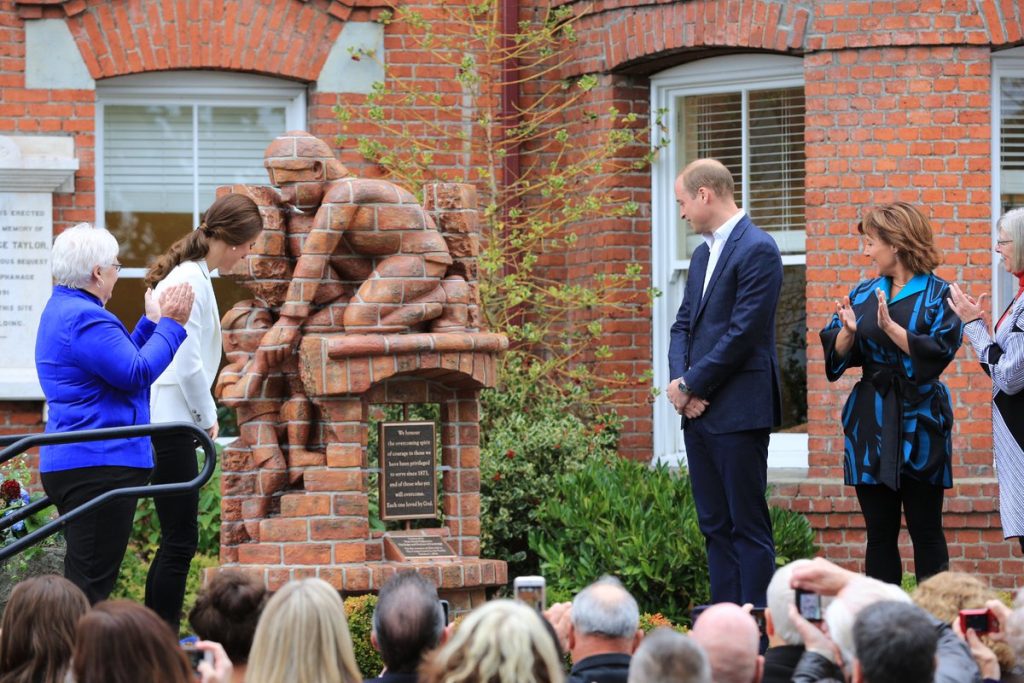 The second stop of the day was at Kelty Mental Health Resource Centre – which provides mental health and substance use information, resources, and peer support to children, youth and their families.

William and Kate visited a cafe in Victoria to meet with families and hear about the mental health issues they’ve faced, and the support that Kelty offers.

The KP Twitter account actually did something useful today – they linked to Kelty’s online resource, Mindcheck.ca. Something interesting I noticed when I went to take their “mood check” was that anyone over the age of 30 is apparently walking with a cane (this isn’t shade, I just thought it was funny). 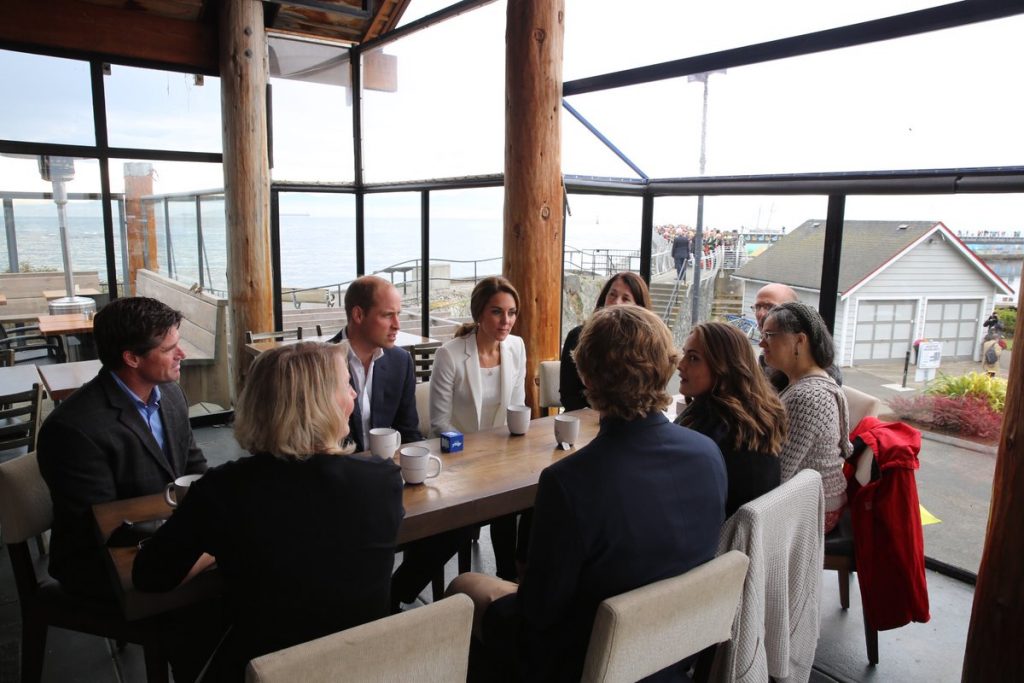 While talking to a 25 year old woman who started having panic attacks at the age of 5, Kate said:

“I still think that initial stigma and taboo around mental health is what stops some young people talking to their parents. They don’t want to burden their parents and that’s the underlying issue which is hard to break through. We’ve heard so much about how early in their lives young children register trauma and how much later in their lives it comes out.”

And talking to a 21 year old woman, William said:

“We all need to be a lot more open about all this stuff. The more we’re talking about mental health, the more we’re finding there are so many more services needed for people who are struggling.” 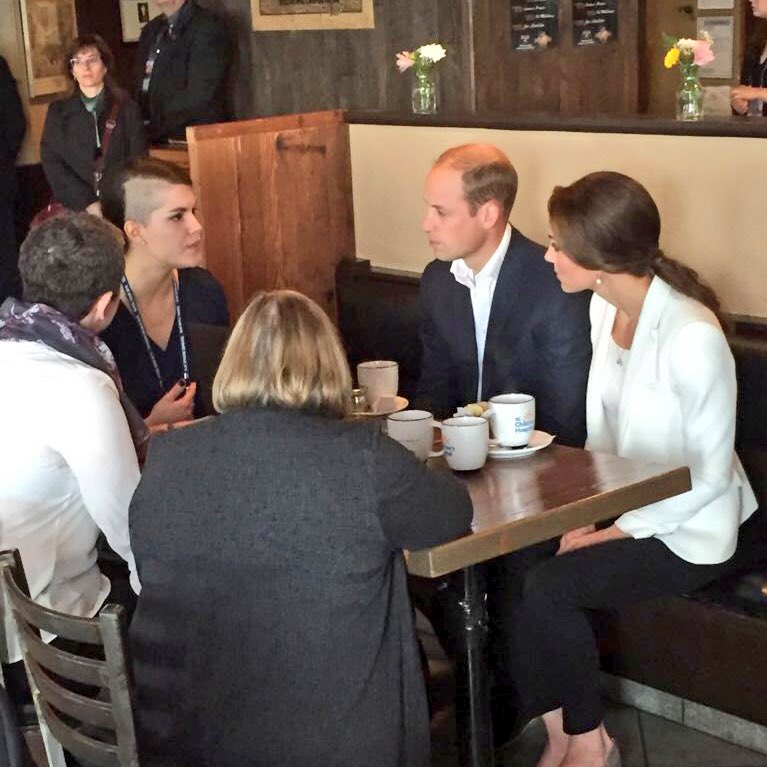 Justin Trudeau announced today that as a gift to mark William and Kate’s tour, the Government of Canada is donating $100,000 to two initiatives: 1) Prince’s Charities Canada (PCC), to be used to promote education in Canada’s Indigenous communities and help more young people reach their full potential, and also to help preserve Indigenous languages in Canada; and 2) Immigrant Services Society of British Columbia, to help assist newcomers with housing, employment, and language skills.

In a statement, Trudeau said: “In keeping with tradition, I am honoured to mark the visit by The Duke and Duchess of Cambridge with a gift that will help both Indigenous youth as well as newcomers to Canada realize their dreams. Canadians have a real affection for the Royal family which was once again very much on display during this tour.”

A Kensington Palace spokeswoman said: “Their Royal Highnesses are touched by this gesture which will benefit many Canadians.”

Both Kate’s white blazer and black jeans are from Zara. Apparently the blazer is a past season and is sold out – which is more proof that Kate has a ton of clothes in her closet that we have never seen. Kate wore her white H&M Off-the-shoulder Top, which she debuted in Cornwall, underneath the blazer. 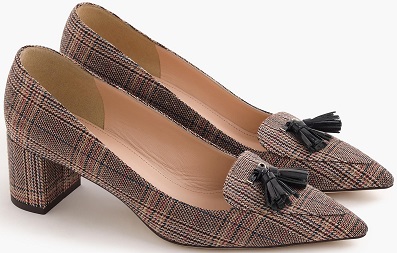 From the ankles up, I really like this look. This is probably one of my favorite dressed down looks from Kate. What keeps it from being my favorite is the shoes – they’re just not my taste. But I am happy that Kate tried something new and didn’t wear wedges or nude heels. Kate wore her hair in a low pony which I thought was pretty.

William and Kate then made their way to Victoria Inner Harbour where they boarded the tall ship Pacific Grace with members of the Sail and Life Training Society – which offers sail training to young people ages 13-25 in order to build their confidence, develop a strong work ethic and take on responsibility, and learn about teamwork and cooperation.

The Cambridges and the crew were joined by 19 student leaders from Jack.org – a national network of young leaders who design initiatives and programs for young people to end the stigma around mental health by reaching out to all young people with an inclusive outreach strategy.

Reporters were not allowed on board the ship with William and Kate.

Afterward, William and Kate did a walkabout and met with the crowds who had gathered to see them.

KP released a statement from William after the engagements:

“Catherine and I are incredibly grateful to the people of Canada for the warmth and hospitality they have extended to our family over the last week. We have loved out time in British Columbia and Yukon and will never forget the beautiful places we have seen and the many people who have been kind enough to come to welcome us in person.

“We feel very lucky to have been able to introduce George and Charlotte to Canada. This country will play a big part in the live of our children and we have created such happy memories for our family during this visit.

“Canada is a country of optimism, generosity, and unrivaled natural beauty. I hope we have helped all Canadians celebrate what makes this country great. We will see you again soon.”