The penultimate day of Prince William and Kate Middleton‘s Royal Tour of Canada saw the couple row a canoe, William speak in Haida, and Kate wear a $250 sweater to go fishing.

Day 7 started with William and Kate – accompanied by 10 warrior paddlers, three community leaders, and two Scotland Yard bodyguards – rowing a 25ft Haida war canoe to Haida Gwaii. The fiberglass canoe was a replica of the traditional red cedar canoes used by the Haida Nation for centuries. The group landed on a beach at Skidegate after paddling for around 20 minutes from a nearby jetty (having flown by helicopter onto Graham Island after traveling from Victoria in a military plane).

When they arrived, William and Kate were greeted by hereditary leaders before touring the Haida Heritage Centre and Museum. William and Kate were given a traditional welcome and watched Haida cultural dances at the Performance House. They watched a woman’s dance in honor of Princess Charlotte (the Haida are a matriarchal society) and a man’s dance in honor of Prince George.

William and Kate were given Raven’s Tail scarves trimmed with sea otter fur – a sign of wealth and standing in the Haida community. I understand that anytime fur gets involved there can be heated debates, but please let’s not go there. Whether we like it or not, this is the Haida’s heritage, so let’s be respectful of that right now.

William gave a short speech and spoke a few words in Haida, which garnered cheers from the crowd.

“Women of High Esteem, Chiefs, Friends, ANA t’alang isis ska-wada-gee id ga dalang kil laa, haaw. [Thank you very much for having us here.] Thank you very much for welcoming us into your longhouse and for sharing your traditions with us. The historic link between the Crown and the First Nations people is strong, and something that I hold dear to my heart. And so it is an honour for me to be here with you, to see that your traditions remain strong. We are very much looking forward to spending today with you. Thank you.”

How amazing would it have been for Kate to give this little speech considering the Haida are a matriarchal society?

HRH: "The historic link between the Crown & the First Nations people is strong, & is one that I hold dear to my heart." #RoyalVisitCanada pic.twitter.com/cOMWkPhh7S

After the Performance House, the royal couple moved to the Carving House where they viewed Haida totem poles by carver Guujaaw.

The couple were shown around the grounds of the Heritage Center.

After the Heritage Center, William and Kate moved to the Haida Gwaii Hospital and Health Centre where they toured the facility and met with people who use the facility. They also heard from new mothers who, because of the hospital, were able to stay on Haida Gwaii to give birth. 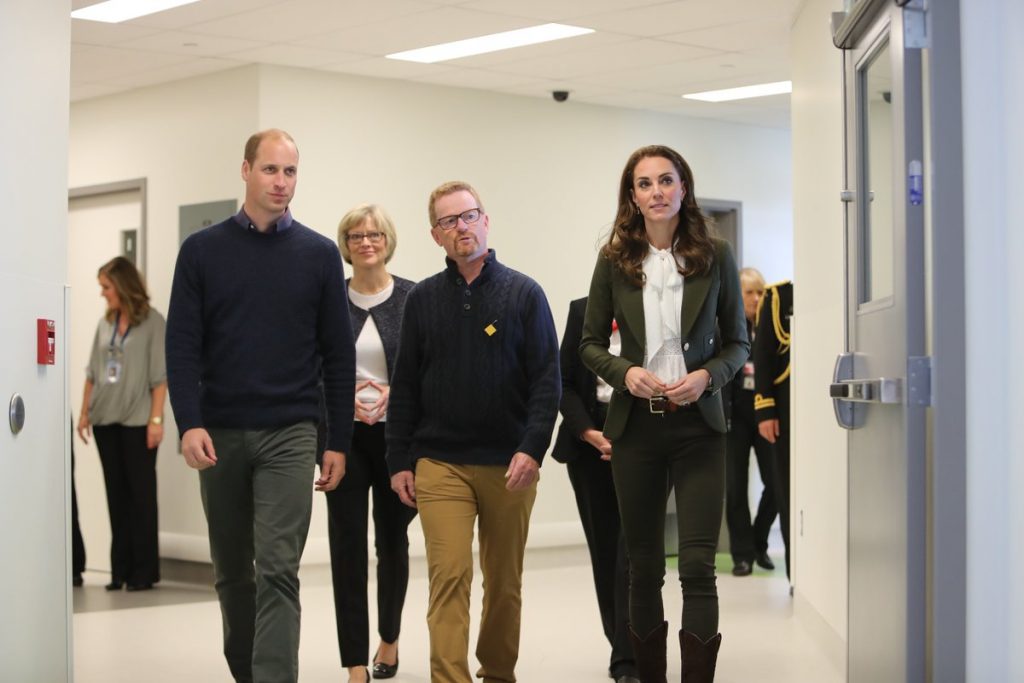 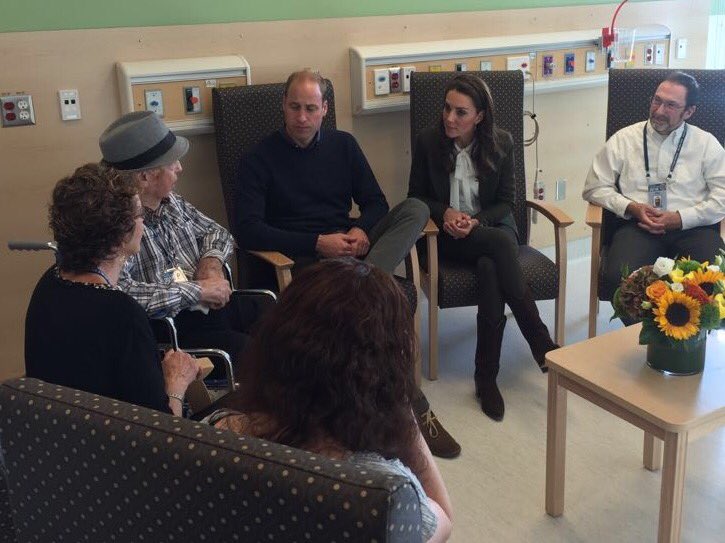 They unveiled a plaque to officially open the new hospital. 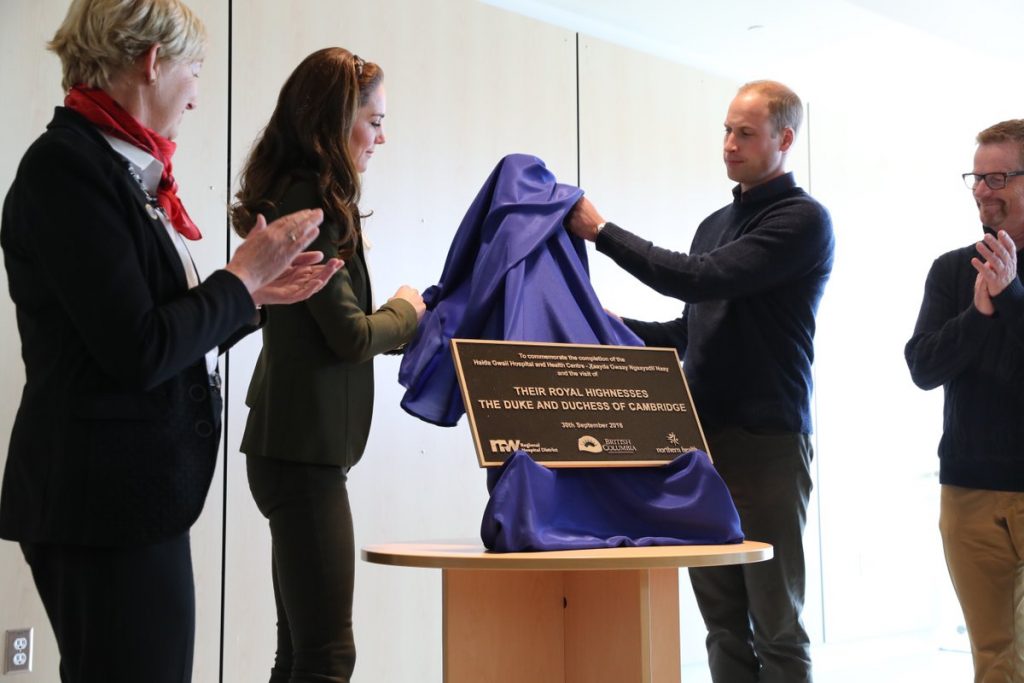 The final event of the day (which lasted about 4 hours and didn’t start until almost noon) was a fishing trip on the waters of the Hectate Strate – they went out on a Highland Ranger fishing boat. William and Kate were joined on their fishing excursion by four young people from Skidegate Youth Centre.

Neither William nor Kate caught anything themselves, but they did get to interact with previously caught sea creatures. From the Daily Mail:

“After 15 minutes crawling the wall of the lake, Pryce called the couple over to help reel in the fishing lines. William was first to give it a go but proved unlucky after the group were greeted by an empty hook. But William and Kate still got to see local salmon up close – a large previously-caught salmon was produced from a cool box and held up by the guide.

“It was then on to check two crab traps that has been put out the previous day next to Sky Ass island. As they headed over, Will and Kate waved to locals who were gathered on the banks nearby. The Duke and Duchess watched intently as the first rack was pulled in empty. But it was a successful catch with the second rack – producing three large Dungeness Crabs, much to the delight of Kate who gasped and said, ‘They’re so big!’

“Without even being prompted, brave Kate asked the guide if she could hold one, and he let them pick up one each from the cage for them to inspect.”

After the phallic clams on Day 4, I’m never not going to think what Kate is saying is dirty.

Here’s a video of Kate holding a crab.

Kate wore a new Smythe one button “Duchess” blazer in Army ($595) (the one I’ve pictured is the linen version, there is also a wool version) – which is the same style she has in navy – and a new Somerset by Alice Temperley “Spot Pretty Blouse” in Ivory (£79.00).

Smythe is a Canadian brand, BTW. 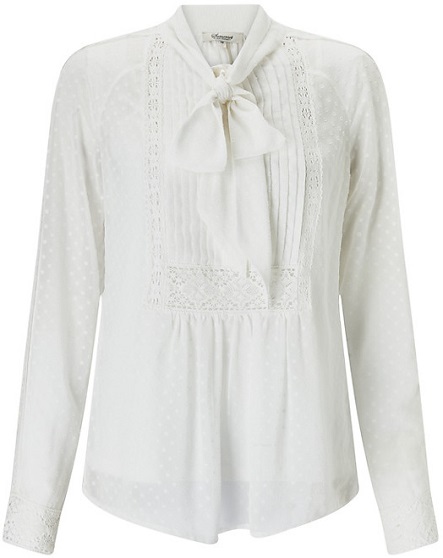 I actually think this outfit is cute… for a riding day at a country club. But, like, a western one because of the boots. I’m not sure how appropriate it is for this occasion, but it is cute.