Princess Charlotte was the star of the show today, September 29, as she joined Prince George and their parents, Prince William and Kate Middleton, for a garden party at Government House in Victoria, Canada on Day 6 of the Royal Tour of Canada.

Charlotte is a little spunky kid, more so than George it seems. She gave a little wave to the crowd as the Cambridges were walking into the party and then she made straight for a balloon arch (she was heard saying, “pop”, while smacking the balloons), while George seemed a bit more reticent walking into the party.

The party featured a petting zoo with miniature horses, one of which George sat on. But he was only on it for less than 15 seconds before asking to get off. George seemed way more interested in bubbles, taking an orange bubble gun and blowing bubbles at his parents. 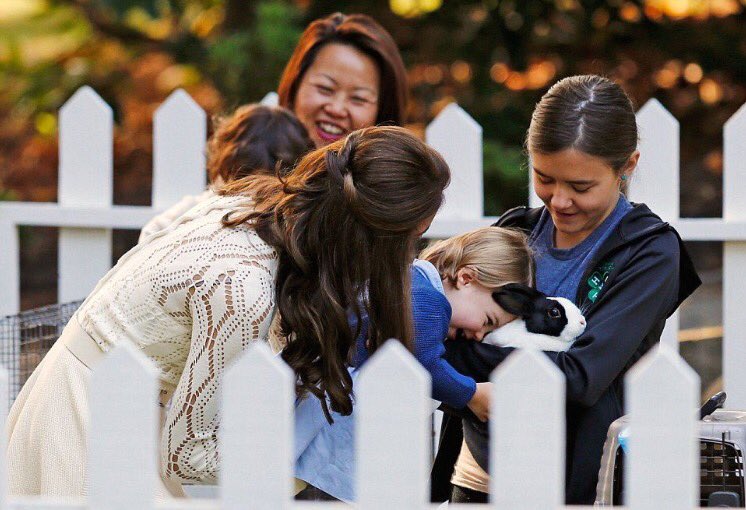 Charlotte spent time loving up on a rabbit (cutest thing ever) and then bounced on a large poodle and golden retriever mix called Moose (who is a cancer therapy dog). She also pet a miniature horse, and when asked whether they had a horse for Charlotte at home, William said, “Not Yet.” From the Express:

“The children in charge of the animals in the petting zoo pen, Emily, 15 and Jennifer 16 (only first names allowed) are volunteers for the 4H club, which teaches children about raising animals.

“Emily said: ‘Charlotte bent down and was hugging Honey so much and hugging her neck, it was the sweetest most adorable thing ever. She also petted TC a lot. Charlotte seemed to really love the miniature horses. I asked William if they had a pony for her at home and he said ‘not yet.’ George sat on Honey. William and Kate asked a lot of questions about the animals, if George could ride Honey and TC.’

“Jennifer said about the goat, which was called Bethany: ‘Charlotte was really liking petting Bethany’s tail. They were all super nice. It was a once in a lifetime opportunity.'”

Charlotte was very interested in the balloons, and had a balloon flower made by a balloon animal maker. When George saw Charlotte was getting balloons, he came over and wanted one, too (because Charlotte can’t get all the attention?). And apparently George knows about volcanoes and lava. From the Mirror:

“Paul [the balloon maker] said: ‘It was totally over the top. I made a teddy bear and a flower for Charlotte and made George a tree and a volcano. When I made him the spider he started to laugh and pushed it in my face then pushed it in dad’s face. William said ‘We try making balloons at home but it doesn’t work’.

“At first George wasn’t interested in getting one until Charlotte was getting one, then he was right over. He wanted what she had. George especially asked for a volcano and he was very proud to tell me all about volcanoes. When I started with the orange flames he was pleased to tell me ‘And that’s lava’. Charlotte asked for a flower, I think she said ‘flower’ because the other little girls were asking for flowers.”

The party was for children and families of military service members. As we’ve suspected since Trooping the Color, Charlotte is teething. More from the Mirror:

“One of the guests, a little girl called Brielle, three, from Victoria, was delighted to meet Charlotte. Her mum Andrea, a charity volunteer, said: ‘Charlotte was chewing on her fingers so I asked if she was teething and yes, it’s very normal. She [Kate?] talked about bath time and how she [Charlotte] is always hungry.’

“Dad Lucas Kenward, CO of HMCS Edmonton, a Canadian warship, said about George: ‘He was definitely into the bubbles. It was much more intimate than I anticipated. It wasn’t about the Duke and Duchess coming down the stairs. It was nice to see they have kids that are like all our kids, down to earth, interacting. It didn’t feel scripted at all.’

“Andrea added: ‘I think they’re really enjoying their time here. They said it was fabulous.'”

William and Kate are just like us, you guys! They’re just normal, everyday, “spend hundreds of dollars on kids clothes that they’ll grow out of in two months” people!

“Another family who attended the event are Andrew and Kristy Matheson, 35 and 34, with their kids Lily 19 months and Isabelle 4. Andrew is a submariner on HMCS Victoria.

“‘It was a bit surreal at first, it’s not too often you get to royalty you only see in the media,’ he said. ‘But at the heart, they’re parents. We talked about the challenges they have of being on a tight schedule and juggling children and how you’re always on edge because you always have one eye on the kids. They said they were loving their time in Victoria.'”

My impression of Charlotte and George is that Charlotte is much more outgoing and curious about the world while George is more shy – at first anyway, that shoving a balloon spider into people’s faces story isn’t cute.

I am wondering, though, why this was a “party for military families” instead of “William and Kate take George and Charlotte to the petting zoo”. Because from what I’ve seen, neither George nor Charlotte interacted much with the other children there. And William and Kate spent most of the time walking around with their kids rather than mingling with the other families.

It was nice to see them interacting with the world a bit more, though. I wish William and Kate did more events like this with their kids.

BTW, Kate bent down a lot because of Charlotte, and there are photos where you can see up Kate’s skirt a bit. But the dress comes with a slip so nothing is showing, other than the slip.

Charlotte wore Spanish brands for the party: Pepa & Co. (a brand she and George have worn many times before) “Classic handsmocked dress – Blue and coral” (£74.00); and a blue cardigan (Rebecca English on Twitter said it’s from Mi Lucero Baby, but People has a quote from the woman who runs Amaia and she says the sweater is the same one George wore to visit Charlotte in the hospital). She also wore blue shoes and a blue bow in her hair. 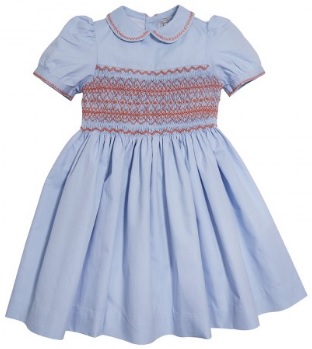 PS. I want to reiterate again that it is not okay to insult children or make fun of their looks. I brought up what George and Charlotte were wearing specifically to talk about Kate’s choice of color and brand for her kids, but that’s about Kate not the kids. We can talk about the kids (I mentioned my impressions of their personalities), but please don’t insult them or make fun of their looks.

Here are some more photos from the event: 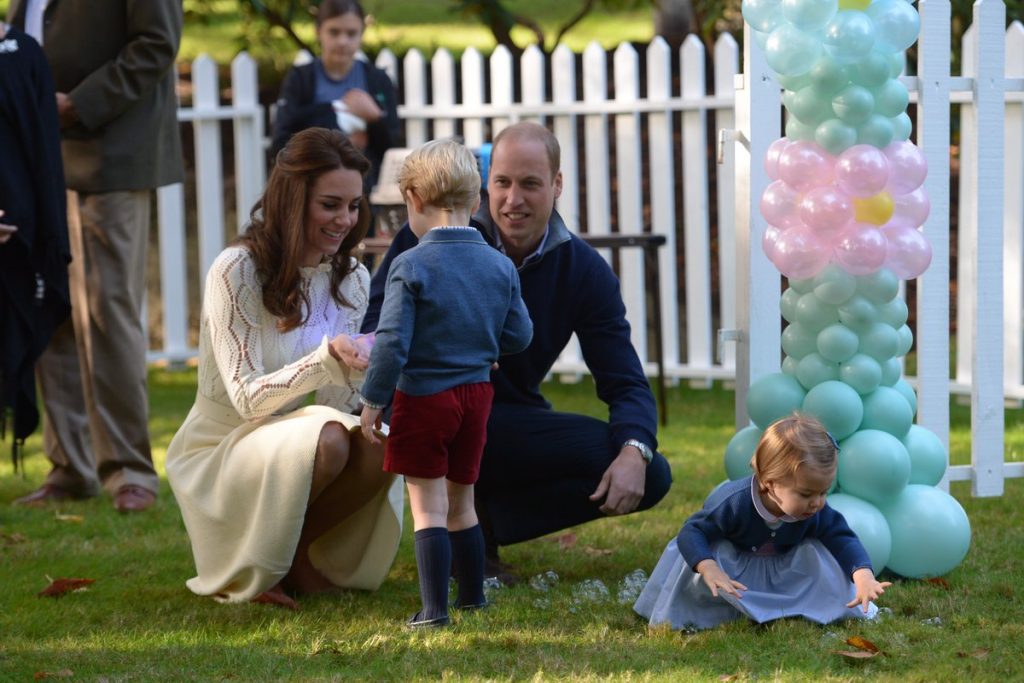