The Royal Tour of Canada is already half way over, and on Day 5 Prince William and Kate Middleton were in Yukon. 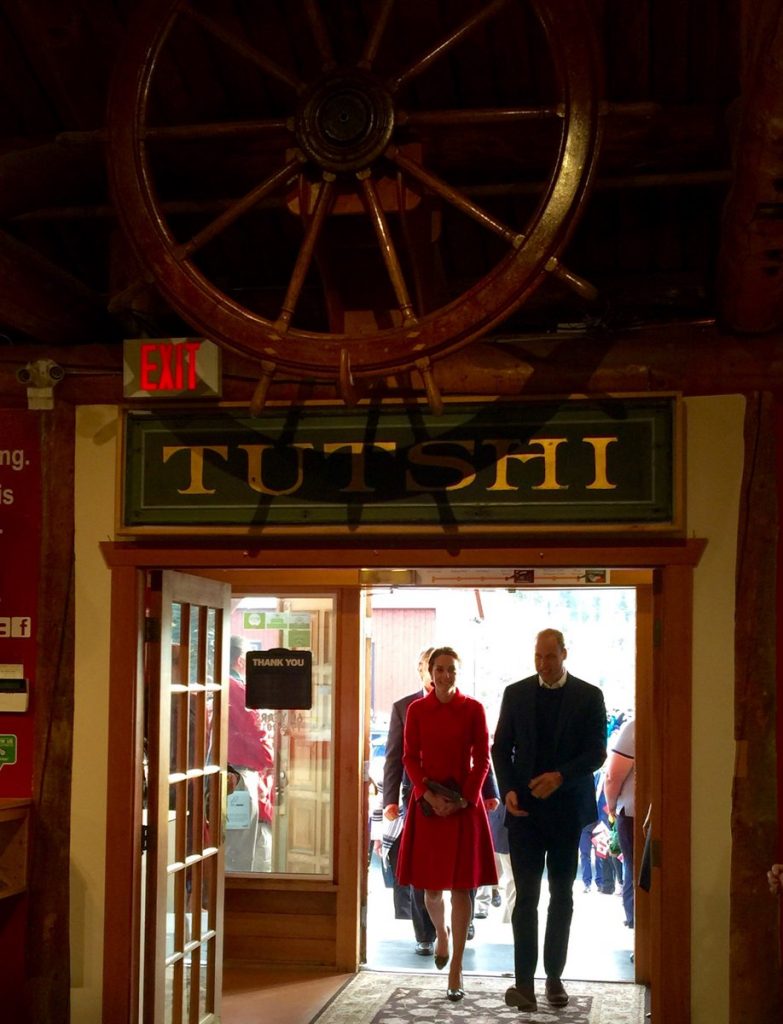 William and Kate’s first stop of the day was at MacBride Museum of Yukon History in Whitehorse (which The Queen and Prince Philip visited in 1959) where they sat in on a story circle with children and elders from the Language Nest program at Kwanlin Dün First Nation’s Dusk’a Day Care, who read a story book in Southern Tutchone. 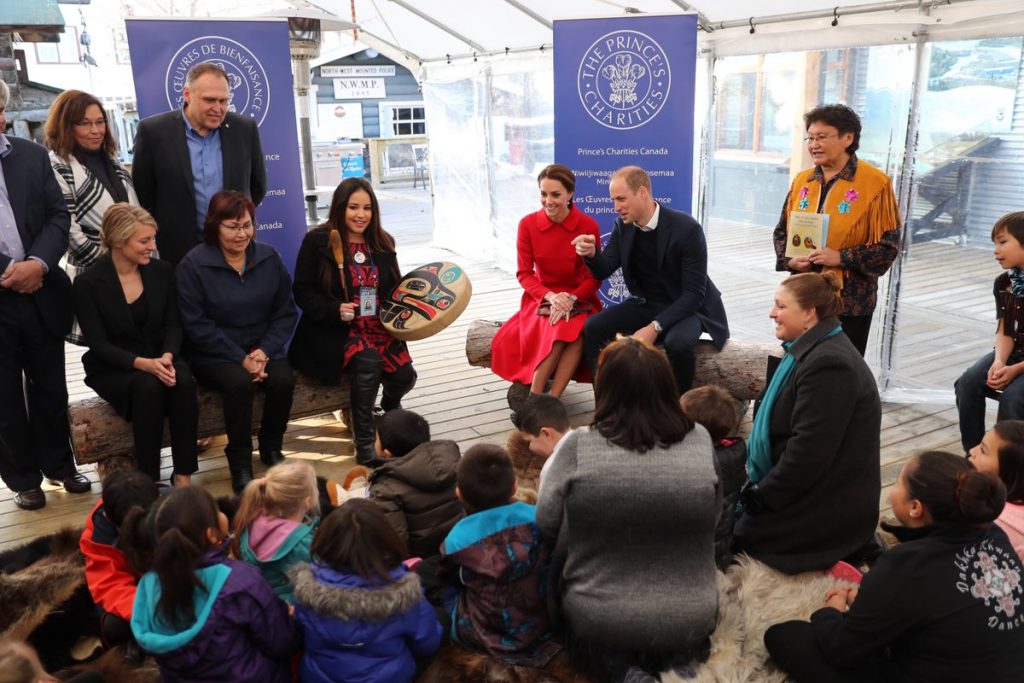 Then the fun begins, because William and Kate joined Queen Elizabeth II, Prince Harry, and Sophie Countess of Wessex and tweeted. And by “tweeted” I mean they let someone else write the tweet and then they hit send. But it wasn’t any normal tweet, it was part of the “Telegraph to Tweet” guestbook at Yukon’s first telegraph office at the Museum where they use an old telegraph machine to type Morse code which is then translated into a tweet. 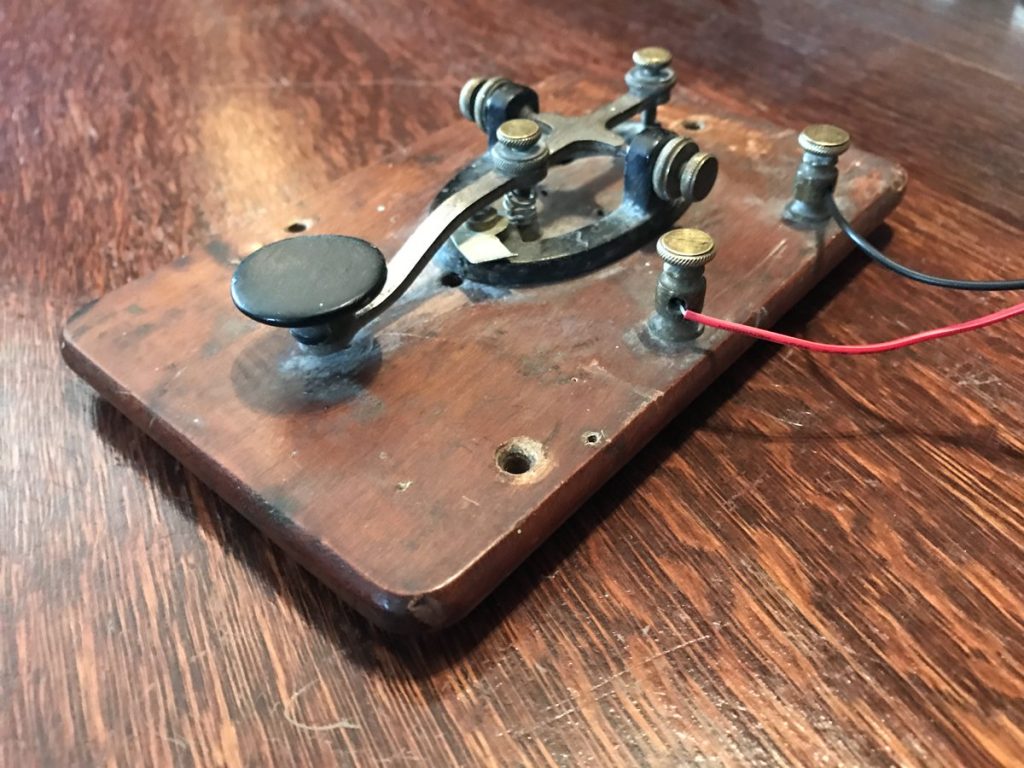 Former Yukon Commissioner and telegraph operator Doug Bell wrote out the tweet, and William and Kate hit the button to send it. 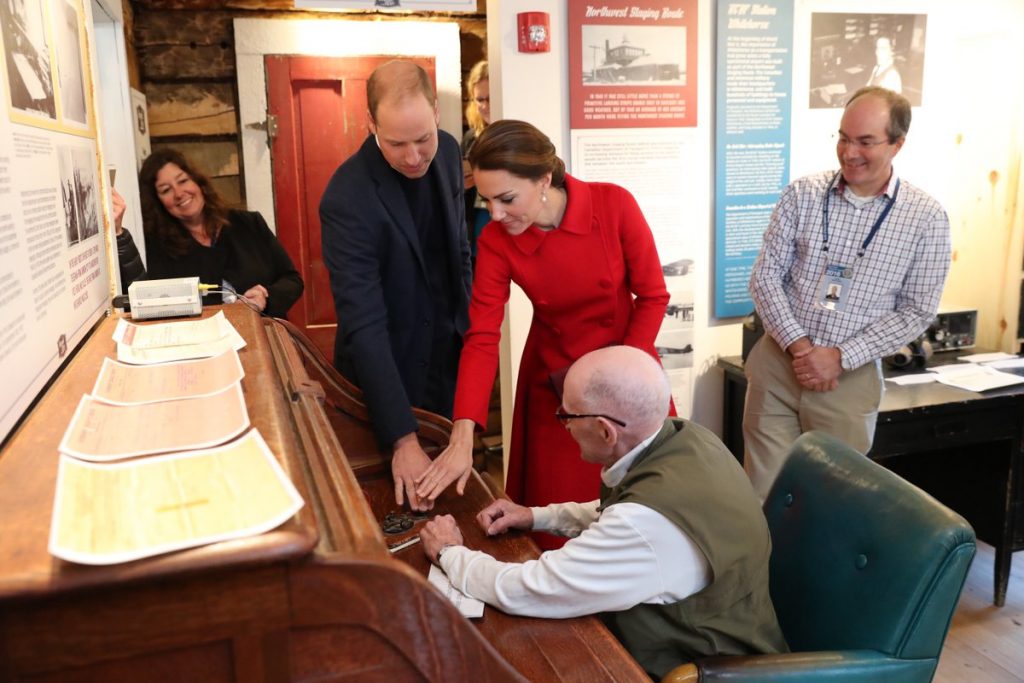 Here’s a video of the tweeting.

And here’s the actual tweet they sent. They wrote: “THE DUKE AND DUCHESS OF CAMBRIDGE, SEPTEMBER 2016, WHITEHORSE YUKON” #ThisIsSoPersonal #YoureBlessedForMeetingUs #IAmAPrince

Even the Queen’s tweets are more personal than this. I realize that this was written on an old telegraph machine and that this is a guestbook, but still.

THE DUKE AND DUCHESS OF CAMBRIDGE, SEPTEMBER 2016, WHITEHORSE YUKON

Kate is really touchy-feely with William this tour. This is the second time she’s touched him.

After William and Kate left the Museum, they viewed a Healing Totem, met members of Bring Youth Toward Equality (BYTE), walked through the Youth Art Festival, and then greeted the crowd. 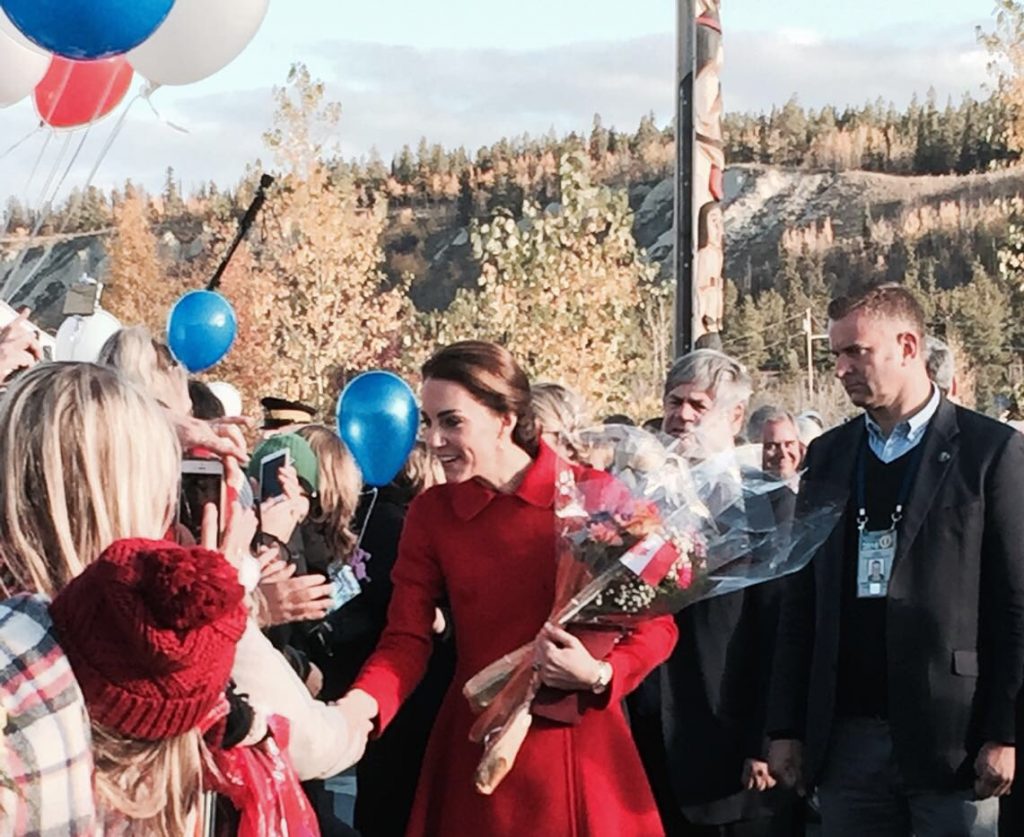 Kate wore red again, because Canada. Which is fine; she looks good in red and at least it’s not blue. Kate wore a red coat by Carolina Herrera from the CH AW16 collection, her Annoushka Pearl Drop earrings, Cartier watch, carried her Maple Leaf scarf, her Mulberry Baywaters clutch in red suede, and new Tod’s burgundy Leather Fringe Buckle Detail Pumps (in black, they retailed for $665.00 but are on sale for $498.33). The pumps are really cute. 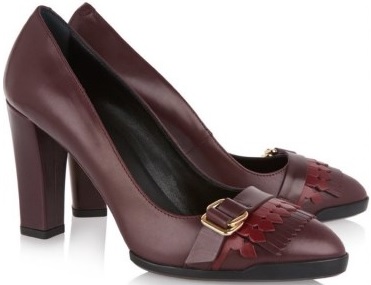 After the events in Whitehorse, William and Kate traveled to Carcross where they were given a traditional welcome by the Carcross Tagish First Nation people. The couple were given a hand-carved wooden totem as a gift.

William and Kate were given a tour of recently completed buildings and public spaces and met locals in the community. They painted the eye of a Tagish 35ft totem project, which takes a year to carve, to mark their visit.

The royal couple then traveled to Montana Mountain, which is known for its scenery and biking trails, where they met bikers from the Single Track to Success (S2S) project, which builds world class trails and provides life changing experiences to local youth.

Apparently, William spoke about how Prince George would have loved the biking trails. From the Mirror:

“William and Kate watched children as young as three-year-old Prince George cycling around a small circuit as part of their training with the Boreale Warriors club. The couple told their hosts George might have enjoyed it. ‘They said he has been bombing around on a bike lately,’ Currie Dixon, sports minister for the Yukon said.”

I believe it. We’ve seen pap photos crop up of George riding a bike while out with Nanny Maria.

William and Kate toured a steam train (which was not scheduled but they decided to anyway once they were told that the Queen and Prince Philip had traveled on the train when they visited in 1959 – apparently William was super excited about learning this), but when they climbed down from the cab the train was stationed on a bridge on the White Pass and Yukon Route railway, so they had to sidestep their way back onto solid ground.

In a shocking to me move, Kate hugged a fan. From the Express:

“Gwen Wally, 48, from the Carcross Tagish First Nation shouted out to Prince William, interrupting as he and Kate were chatting to her son, Shane Wally. ‘I love you. I loved your mum. I’ve been watching you since you were little,’ she shouted.

“‘Is that your mother?’ William asked, laughing.

“‘That is my mother,’ Shane, 26, said slightly awkwardly. ‘I was pretty nervous but also pretty proud. She is their biggest fan,’ he said after talking to the couple about a mountain bike trail scheme his family helped to set up at Montana Mountain in Carcross, Yukon, in northern Canada.

“William and Kate walked across to a group of parents and grandparents involved in the project, including Mrs Wally. They hugged her and another member of the Carcross First Nation band, Susan James. Mrs Wally told the royal couple: ‘You just made the top of my bucket list. I’ve been following you since the days of Diana.’

“She told Kate she had made some slippers for Prince George and Princess Charlotte but had been told she could not give then to the couple so planned to post them instead. ‘I’ll look out for them,’ Kate said.”

That’s really nice that Kate could make that woman so happy. I’m glad she did that.

For Carcross, Kate changed into a Sentaler “Wrap Coat with Ribbed Sleeves” in grey ($920) (the coat also comes in black, navy, and pink), skinny jeans, and a shirt underneath the coat. She kept the undo from earlier and wore earrings by Shelley MacDonald from Whitehorse (her Etsy shop is here).

Sentaler is a Canadian designer, as is Shelley MacDonald.

Kate also wore brown suede R. Soles cowboy boots. I don’t hate to be a cowboy boot snob: suede boots are dumb and impractical for anyone who actually rides horses, works on a farm, etc. Your boots are going to get dirty, you’re going to want to hose them off, and suede is super dumb for that purpose.

BTW, during the day, Tourism Victoria tweeted about how Prince George and Princess Charlotte had visited a petting zoo on September 27, but they were asked to delete it.