Prince William and Kate Middleton traveled to Bella Bella yesterday, September 26, for Day 3 of their Royal Tour of Canada. The first part of their program, the aerial tour of Great Bear Rainforest, had to be cancelled due to bad weather, but the rest of the day’s program went ahead on schedule. 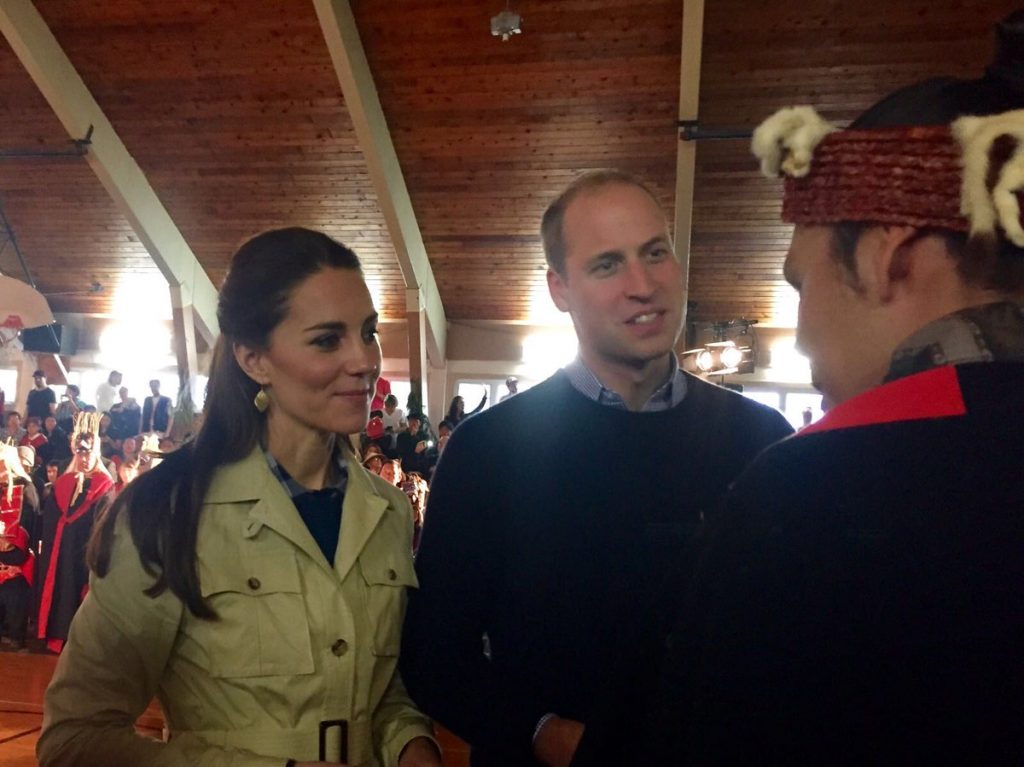 William and Kate arrived at Wawiska Community Hall, met with Heiltsuk First Nation community, and watched an official welcome performance (which went on for an hour longer than planned). William was greeted as a “hemas” (a hereditary chief) and Kate was greeted as an “umaks” (a woman of high rank or standing).

William and Kate were shown one of the most precious items owned by the community: a royal staff with a silver crown head given to the present chief’s great-grandfather by Queen Victoria. It was awarded to the Heiltsuk people as a sign of honor.

William and Kate also listened to several speeches from senior members of the Heiltsuk community about the battle to protect and nurture their traditional lands. You can’t tell from these photos but there were many photos of William and Kate looking very bored. I mentioned on Twitter that William and Kate need to work on their “resting but not bored” face. Both of them have a very bored expression when their faces are “resting” and it’s happened at so many engagements that they’ve done. They need to practice looking halfway interested when listening to speeches.

Then they watched a series of dances by a group of children and a large group of women who danced what is known as “A ladies’ welcome” to the sound of drums and chanting. 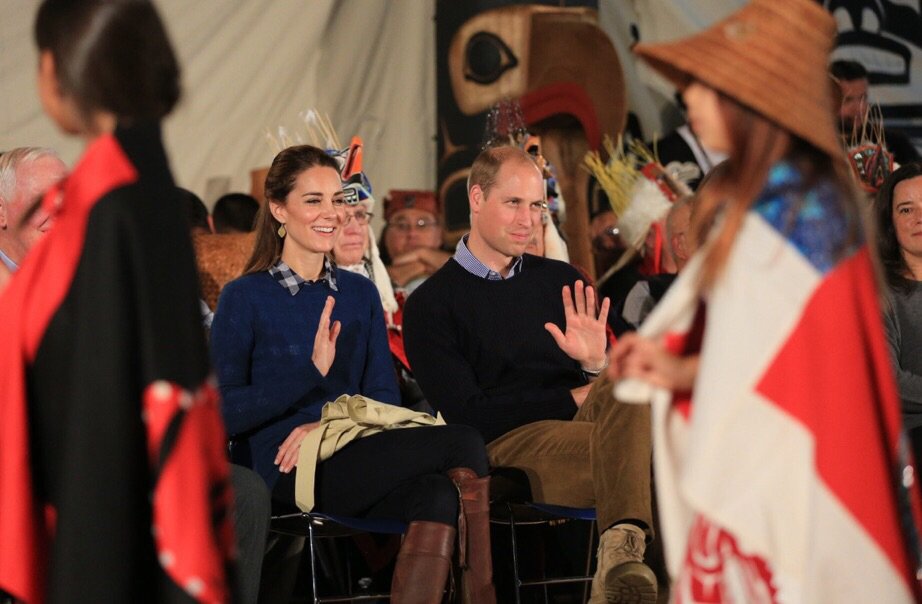 Then the Cambridges were given a number of gifts including “dancing vests” for themselves and Prince George and Princess Charlotte, a traditional doll for Charlotte, a drum for George, and hats for both.

“Chief Marilyn Slett told them: ‘On behalf our nation we welcome you and we thank you for being here as part of the healing that we are undertaking. As part of our… feasting system we would like to give our guests a gift.’

“First the blankets and then the ‘dancing vests’ – worn by men, women and children during traditional celebrations – were placed over the couple’ shoulders.

“‘We use these blankets to wrap the spirits of our ancestors around you and to unite your spirits together with ours,’ they were told. ‘In our way our blankets encompass the sprites of our ancestors, our history and our culture, our stories of who we are and where we come from.’

“The blankets were printed with the outline of a grizzly bear, trees to represent the forest that surrounds the Heiltsuk community and local flora and fauna. ‘The design represents all life, not just animals but us as humans. There is no hierarchy in the importance of life, we are all dependent on one another,’ Chief Slett said.

“They were then handed miniature dancing vests for their children – one in white for Charlotte and another in black for George, and examined them delightedly. William and Kate were also given a traditional doll by a woman carrying a baby for Charlotte. […] They were also given a painted drum for George and urged them to bring him back to the community to learn ‘how to free the spirits of the drum’.”

It makes me chuckle that a Chief is telling a Prince that “there is no hierarchy in the importance of life” considering the entire idea of “Prince” or “Chief” is centered around being more important than others, but I get what the Chief was going for.

William and Kate then moved to Elders Lodge where William gave a speech to launch Canada’s contribution to the Queen’s Commonwealth Canopy. The full transcript is not online as of time of posting, so I’m quoting the KP Twitter account:

“It gives me great pleasure to be here today as the Great Bear Rainforest is officially committed to the Queen’s Commonwealth Canopy. By CHOGM 2018, it is expected that all 53 countries of the Commonwealth will have joined the Queen’s Commonwealth Canopy, creating a global network of forests that will benefit indigenous communities, wildlife and tourism now, and into the future. The establishment of the Canopy is a loud and unambiguous statement … that nature is fundamental to the health of our societies. Her Majesty is immensely grateful to you, and the people of Canada, for the leadership you have shown in making this contribution.”

The Queen’s Commonwealth Canopy (QCC) was launched at the Commonwealth Heads of Government Meeting in Malta in 2015. The QCC is a unique network of forest conservation initiatives, which involves all 53 countries of the Commonwealth – presenting a rare opportunity to unite the whole Commonwealth and save one of the world’s most important natural habitats: forests. 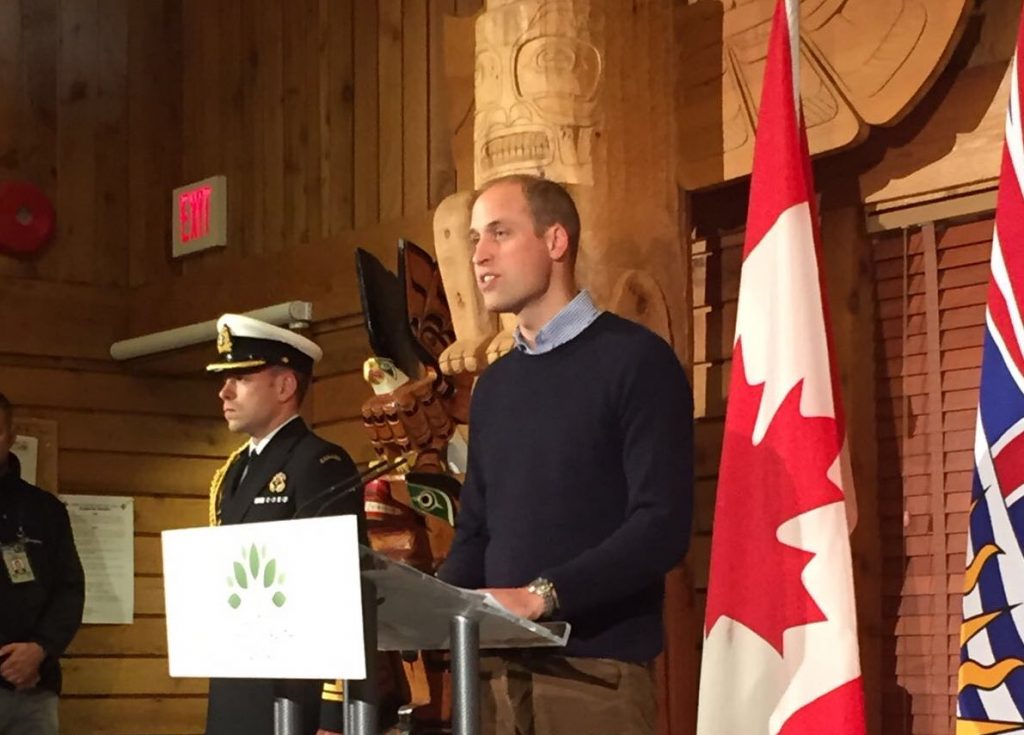 The royal couple then walked through Great Bear Rainforest before unveiling a plaque to mark their visit and the dedication of the rainforest to the QCC.

Kate wore a jacket from Holland and Holland – which is a London-based gun company which also sells clothing. Kate wore their “Safari Jacket” ($780.00). Underneath the jacket she wore a blue sweater and a plaid shirt. She wore Zara jeans.

Kate wore her Penelope Chivers “Long Tassel Boot” (£475.00) which didn’t go over well when she wore them to hike to Tiger’s Nest back in April, but I actually like these boots.

Kate’s earrings are by Canadian designer Pippa Small. She wore the “Large Gold Kite” earrings which retail for £1,200 or $1,750. You can see the small version of the earrings here.

In the evening, back in Victoria, William and Kate attended a reception at Government House attended by 200 guests from British Columbia’s legislature, government and judiciary.

William participated in a “Black Rod Ceremony” ahead of the reception. The Black Rod ceremonial staff was created in 2012 for The Queen’s Diamond Jubilee and it had three rings symbolizing the province, Canada, and the Crown. At the ceremony, with the assistance of Grand Chief Edward John and Chief Shane Gottfriedson, William added a fourth ring engraved with eagle feathers and a canoe symbolizing aboriginal reconciliation.

Grand Chief Stewart Phillip, leader of the Union of British Columbian Indian Chiefs, was supposed to hand the fourth ring to William at the ceremony, but he boycotted the event. In a statement, Grand Chief Phillip said: “With the deepening poverty of our communities, remembering the missing and murdered indigenous women and girls and the ongoing negligence of indigenous child welfare policies across this country, in good conscience, I cannot participate in the Black Rod Ceremony.”

Kate carried another new red clutch (which I like a lot) and wore red suede shoes (I think they may be her Gianvito Rossi pumps she wore to Order of the Garter but I’m not sure). 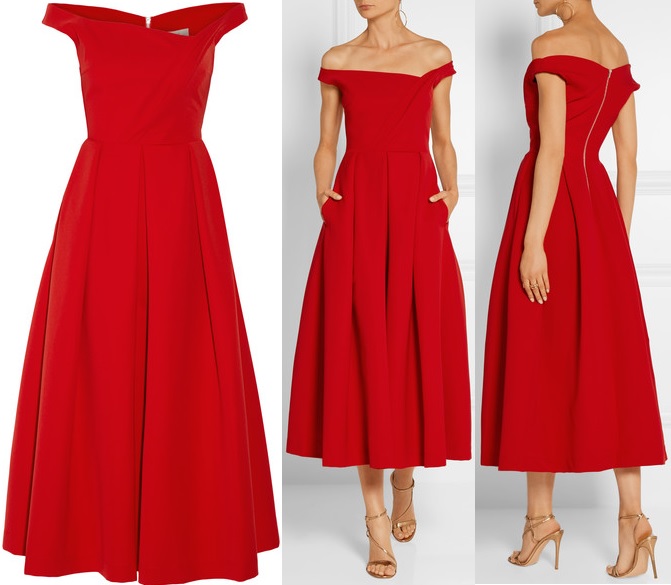 For jewelry, Kate wore the Queen’s Diamond Maple Leaf Brooch again, as well as her Soru Jewellery “Baroque Pearl Double Sided Earrings” (£130.00) which she debuted at Wimbledon in July.

I think Kate looks very pretty here. I don’t mind the matching red shoes and clutch (I don’t care that the reds don’t match), although I do prefer the strappy shoes the model in the stock photo is wearing. These earrings are not my taste up close, but I like that they are large enough to be seen in photos from far away.

PS. Please stop commenting on Kate’s weight so much. It’s getting to the point where people are being very rude about it and it’s making me very uncomfortable. It’s fine to comment on the fit of clothes, it’s fine to notice her size and say “she’s thin”, but the weight comments are starting to cross a line into “she looks like a skeleton and her face is falling apart” territory and those types of derogatory comments make me uncomfortable.