Prince William and Kate Middleton spent their second day in Cornwall today, September 2, but due to rain and fog their schedule had to be rearranged. They were due to fly out to the Isles of Scilly in the morning but their travel was delayed, so the made other arrangements instead. The did get to the Isles of Scilly in the afternoon but their schedule there had to be changed. 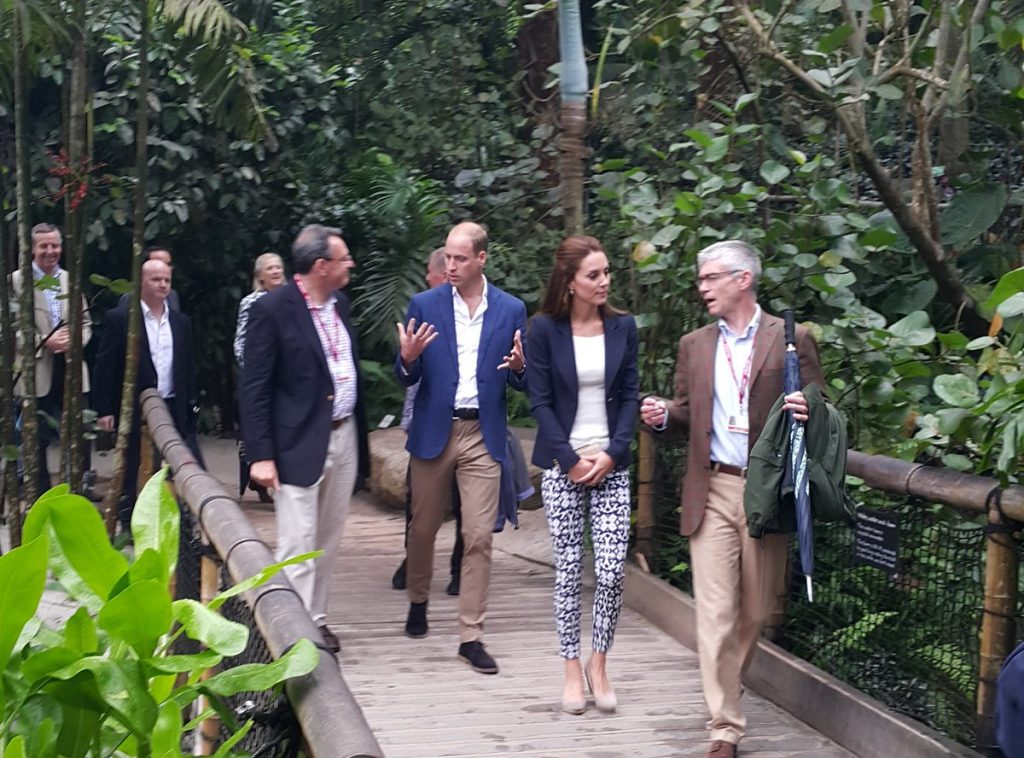 The royal couple’s change of plans meant they spent the morning at Eden Project, and by “morning” I mean they arrived at 11:30 AM UK time. Eden Project is an educational charity which has massive Biomes housing the largest rainforest in captivity.

The Eden Project tells the story of people’s dependence on the natural world, of regeneration and what people can achieve when they work together with nature. It is designed to give visitors a great day out while demonstrating, in a serious yet entertaining way, how indispensable plants are to people; how we can adapt together; and how a soil-less hole in the ground can be transformed into a place of beauty and inspiration. Eden Project is a tourist attraction and a charity with all of it’s income being reinvested in the charity’s educational projects.

William and Kate visited the Rainforest Biome and the Mediterranean Biome. 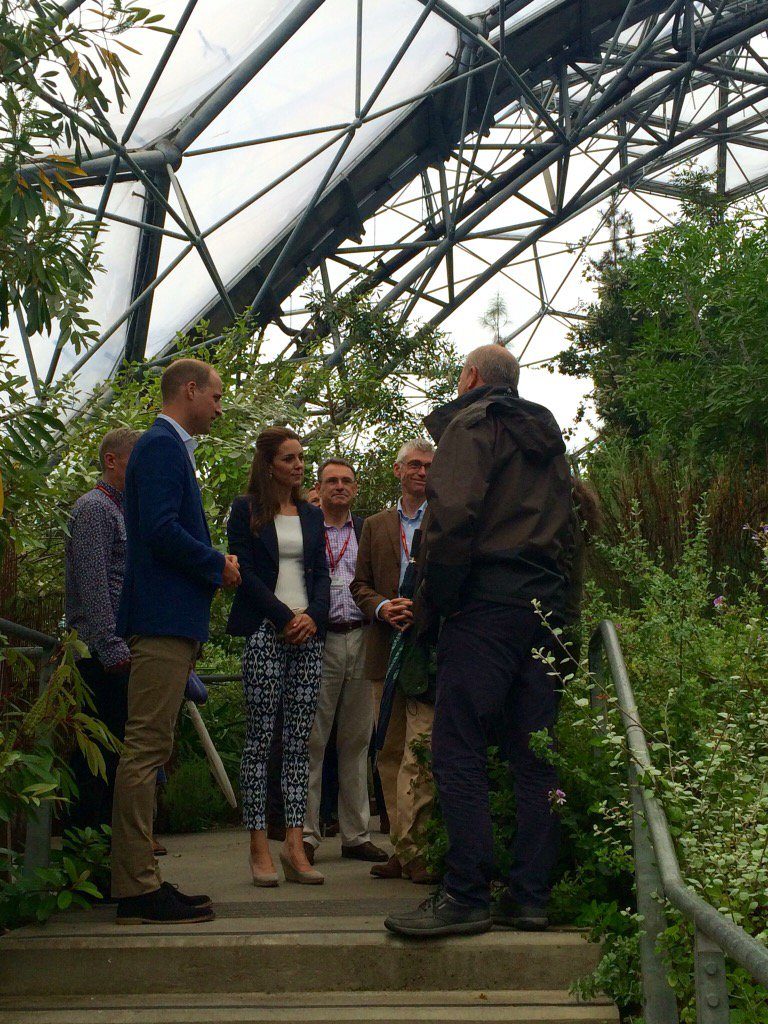 While at Eden Project, William and Kate saw a baby dinosaur puppet called Mutty. Nicole White, who was holding the puppet, said:

“Kate didn’t see the baby muttaburrasaurus at first as his colours blended in with my clothes so she had quite a giggle once she realised what I was holding. I just told her that Mutty really wanted to meet her and she said ‘I bet the kids really like him’. She said George loves dinosaurs and would have loved to be here to meet him.”

You can see part of that interaction with the dinosaur puppet in this video of William and Kate at Eden Project. Is it bad that the most interesting part of the video for me were the last few seconds where Kate is walking without her hands over her crotch?

While at Eden Project, William and Kate tasted a baobab smoothie containing the fruit mixed with banana, coconut and other fruits. Man, Kate is eating all the things lately.

The Duke and Duchess of Cambridge finally made it to the Isles of Scilly, by helicopter, with an abridged schedule. Their first stop was Tresco Abbey Garden, a sub-tropical garden hosting thousands of exotic plants from 80 countries.

They left Tresco on a “Pegasus” boat, heading to St. Martin’s.

They arrived at St. Martin’s where they met residents and tourists.

William and Kate then moved on to Scilly Flowers, a postal flower service which specializes in winter blooms due to the unique climate. They met Ben and Zoe Julian, the second generation of the family to run the business.

The couple’s final stop of the day was at St Martin’s Community Hall, where they met the island’s oldest resident Gladys Wilkins (according to KP Twitter, but Mirror has her name as Gladys Perkins), and William was presented with a painting from some kids.

A nice picture to remember the visit to St Martin's Community Hall. pic.twitter.com/BwlRLy7cmz

Here is some footage from their visit to Scilly. The squirrel is totally the star of this video.

While on St. Martin’s, William and Kate met 16 year old Megan Hawker who stopped them to thank them for their work with anti-bullying:

“The 16-year-old bullying victim stopped the couple as they walked and said to William: ‘I want to thank you, for the work you and Harry and Kate are doing about bullying.’

“As the royal couple listened, Kate also sympathised and asked Miss Hawker how she had done in her GCSEs and the teenager replied ‘as well as I could’ and William put his arm on the teenager’s right shoulder as they left. Afterwards Miss Hawker… said: ‘I’ve been bullied for over seven years, in primary school and throughout secondary school. And I was just so grateful for what they’ve done – I’m so emotional. I was going to write to Kensington Palace, but when I heard they were coming to St Martin’s I wanted to try and meet them.’ She said about her fight against bullying: ‘I’m getting help, but it’s a long road.’

“Her father Dean Hawker, a head chef in a gastro pub, said: ‘She’s been through a lot but she was determined to meet them and thank them.'”

It’s good that whatever work the royal trio are doing in the mental health sector is helping someone.

Now on to fashion… Welp, we asked Kate to wear pants, and I asked yesterday for her to wear something less boring, and she obliged.

It’s certainly not boring. I don’t like the pants, but at least they aren’t boring. I actually like the idea of this outfit, and really like the Smythe One-button blazer over the white top (Anna over at Countess of Wessex blog says it’s most likely a new H&M Off-the-shoulder Top on sale for $15.00). I think it’s a crisp look and worn with the right pants and shoes could look really nice.

Unfortunately, I dislike these Gap Bi-stretch skinny ankle pants in ikat blue ($24.97 – $69.95) (Kate’s color is no longer available). I dislike the print, and how tight they are. I also don’t really care for the LK Bennett Natalie clutch or the Monsoon Fleur wedges (which she changed out of at some point, slipping on her trusty Sebago Balas).

Kate finished off the outfit with her sapphire and diamond drop earrings, Cartier watch, and a half updo.

Here’s a look at the back of her outfit – her hair looks really nice. I don’t want to body-shame anyone, but are ankles supposed to look like that? Because mine don’t and I’m wondering if something is wrong with me.

Based on Twitter post times, William and Kate spent: about 1 hour and 20 minutes at Eden Project (though an Express article says they were there for “more than an hour and a half”); about 40 minutes at Tresco Abbey Garden; the first tweet from St. Martin’s and the first tweet at the community hall were only 20 minutes apart, which makes it seem like they were only at Scilly flowers for 10 minutes which can’t be the case, right?; St Martin’s Community Hall got less than 1 hour of their time, it was probably less than 30 minutes.

Kate met Sophie Hibbs, 10, who has cerebral palsy but loves coming to Eden Project for the stimulus.