Prince William and Kate Middleton made an unannounced visit to mental health charity helpline YoungMinds, which is a partner in the royals’ Heads Together campaign, yesterday, August 25. 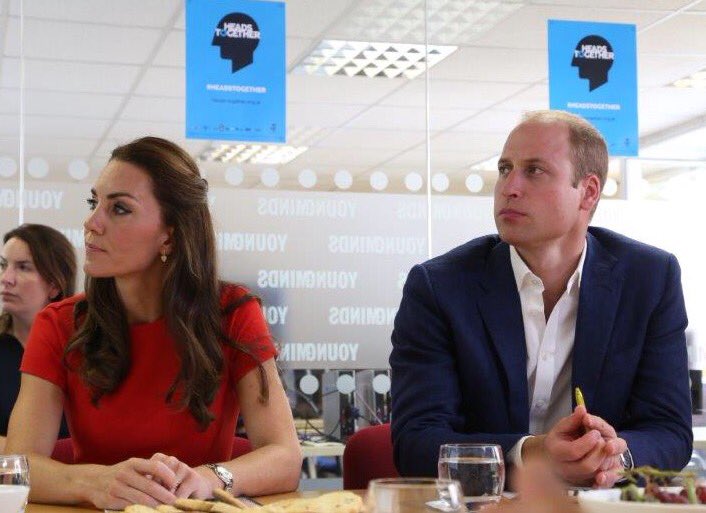 YoungMinds is a charity committed to improving the emotional wellbeing and mental health of children and young people by providing expert knowledge to professionals, parents, and young people through their Parents’ Helpline, online resources, training and development, outreach work, and publications.

William and Kate visited YoungMinds to meet the volunteers who answer calls made to the helpline, and to get a sense of what they hear from people who call in. William and Kate sat in on a training session that the volunteers go through to prepare them to answer the calls. The volunteers are trained to listen, to talk to parents, ask the right questions, and help parents understand their child’s behavior.

Both William and Kate sat in on live calls from parents about their children’s mental health. William asked for an easy call, claiming his air ambulance job was taking it’s toll on him emotionally. William said:

“Can I have an easy one please? I’m carrying a lot of things at the moment. I’ll be in floods of tears at the end otherwise. I’ve had too many sad stories with the Air Ambulance. I can’t deal with any more stuff. Just maybe at the lower level, if I can. I’m steeling myself the best I can.”

“I found it very eye-opening. I thought the service was fantastic. I think the idea that you’ve got these very caring, lovely people on the end of the phone who listen for as long as they need to, to build the picture of what is going on, and then provide extremely good advice – and then the fact that you’ve got the mental health professionals later down the line if necessary. I think that is a really good balance of getting the right support straight to these families who are clearly at their wits’ end at what to do, and reaching out. Thank goodness they do reach out to something like this. I think it is fantastic.”

“William and I found it absolutely fascinating, from hearing the case study and also taking the calls. What we’ve taken away is just how normal it is. We are parents ourselves, I am sure we will face worries – we do face worries, because we’ve got small young children. If those worries escalate, how vital it is to get support – and you are providing that support. As a parent and as a mother, having that feeling that there is somebody there that is non-judgemental, that can provide the professional support, and that can really provide a helping hand at a really difficult time….”

“It is important that parents understand that you can’t be brilliant at everything. It is totally fine to talk about it and to seek help and to speak out, because we’re not all superheroes. There is a lot of pressure on parents, and most of it is self-made by parents themselves, where you feel you have to be able to handle everything. You have to show strength and resilience to everything. But there are some times when it all gets too much and you need to reach out, and that’s totally fine.”

Here’s a video KP released of the event, with William and Kate speaking with Brennan.

Hear from The Duke and Duchess about what they learned @youngmindsuk parent helpline today with @headstogetherhttps://t.co/TkAwxrjapr

The visit was supposed to be embargoed until after it was over “for the comfort of both the people who might be calling in to the helpline and the people who work there”, but the couple were spotted arriving and photos were published before the event was over.

I appreciate that William and Kate have been “open” the last couple days and given me quotes to publish, because it gives my posts more substance and we have been asking them to open up and say words at engagements for months/years.

On my last post about William and Kate in Luton several of you mentioned that they seem to have corrected for some of the criticism they’ve gotten over the last few months/years. Richard Palmer also noted that William and Kate seem to be correcting for some criticism they’ve received, writing (in the article linked above): “William’s frank discussion of his own emotional state, the second in two days, came after criticism earlier this year that despite launching a Head Together campaign to make people more open about mental health problems, neither he nor Kate nor Prince Harry had talked frankly about their own issues.”

I mean, I hope it continues since that’s what we’ve asked of them for so long. But I have to wonder if William saying “I’ve had too many sad stories with the Air Ambulance” is him setting himself up to leave that job.