Anyone who has followed my blog for any length of time knows that I’m kind of obsessed with royals eating food at engagements. And guess what! Both William and Kate ate some food while at Youthscape! While talking with some kids who were making brownies in the kitchen at Youthscape, William grabbed one and popped it into his mouth, and then Kate took a small piece and nibbled it. 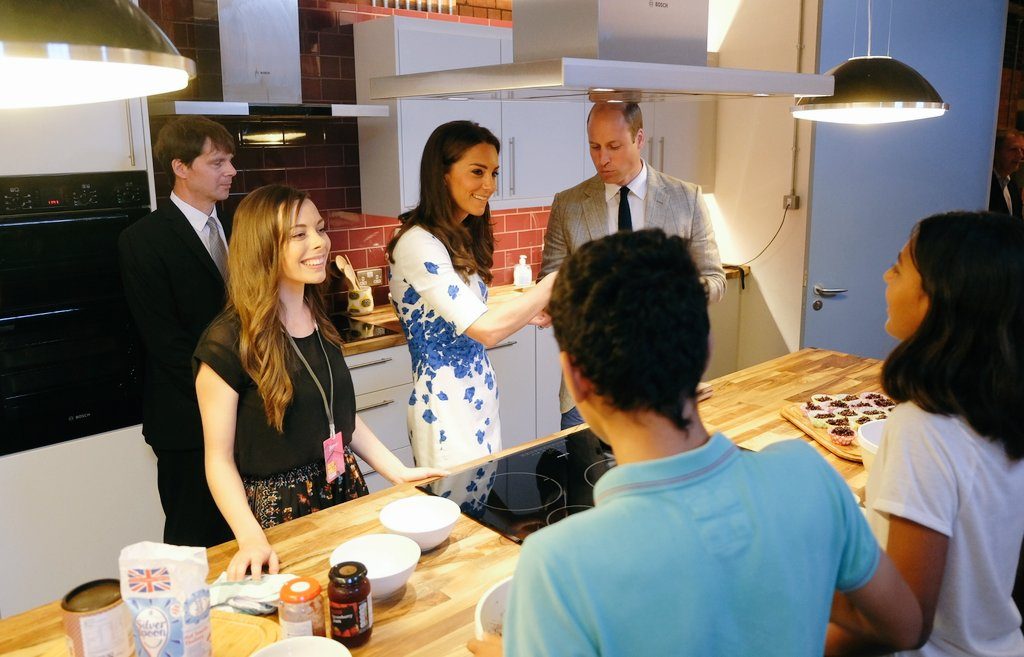 Also while talking with the kids making brownies, Kate mentioned George and claimed she tries to bake with him but he’s just too messy.

“‘So what are you making, this smells seriously good,’ asked Kate, ‘what are you putting in? Is this just chocolate? Golden syrup? Good.’ She added: ‘When I try to do this with George at home, chocolate and the golden syrup goes everywhere. He makes so much mess. It’s chaos.'”

[all quotes from the Daily Mail] 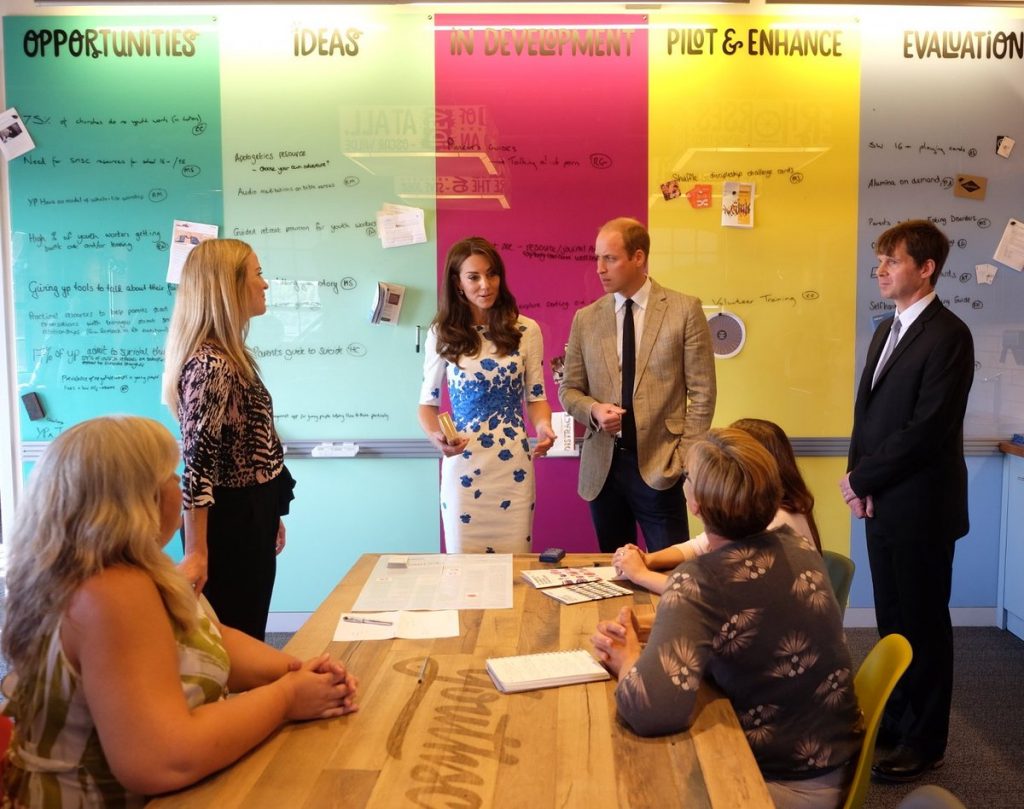 Youthscape is a Christian-based young people’s charity which was started in 1993 by 45 churches in Luton. They focus on helping young people face challenges like being in the care system or dealing with a mental health issues while also working with other youth-based programs across the UK.

In 2012, Youthscape had outgrown it’s previous premises and began funding to purchase and rebuild Bute Mills – which used to be a working flour mill. They opened the new space in April 2016. 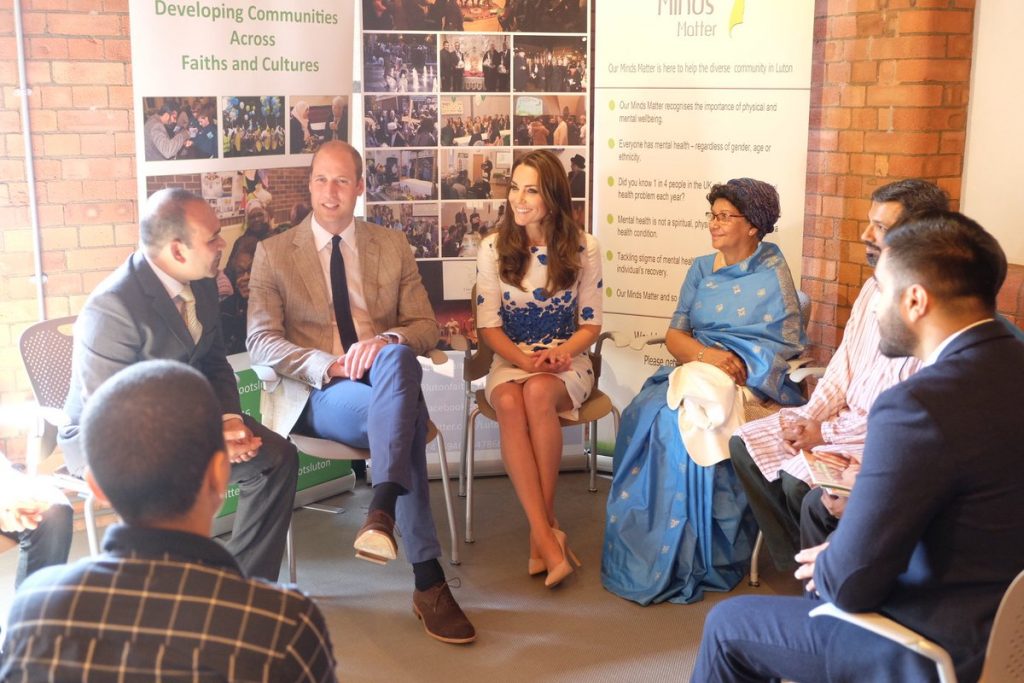 William and Kate toured the new Youthscape facility at Bute Mills and met with staff, volunteers, and young people before joining in discussions with several other faith-based organizations: Luton Council of Faiths, OM Group, and Our Minds Matter. The organizations work together to raise awareness of mental health among faith groups. 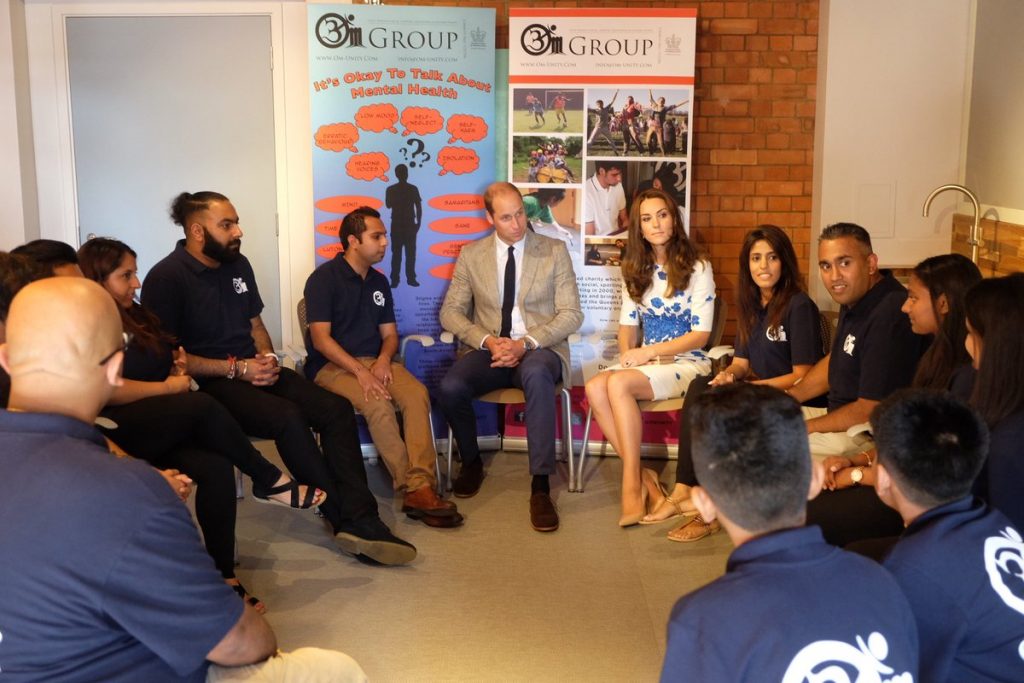 William and Kate also learned about SelfharmUK – which is a project dedicated to supporting young people impacted by self-harm, providing a safe space to talk, ask questions, and be honest about what’s going on in their lives.

The royals met project manager Ruth Ayers who showed them about the work SelfharmUK does. Interestingly, Ruth is comedian James Corden‘s sister, and he tweeted KP’s photo of her with William and Kate with the message: “Check out my sister @Rudimuller here with some friends! So proud of the work she is doing.” I like James Corden, he was on two episodes of Doctor Who as Craig. 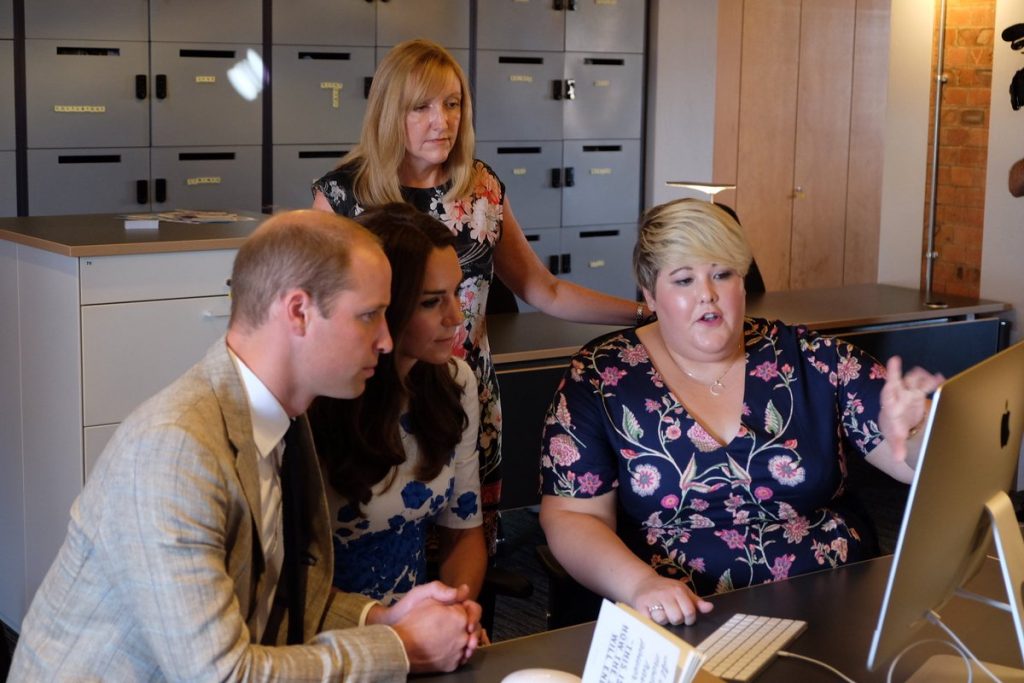 Other interesting bits from Youthscape:

I love UNO, and video games. I’ve not read The Girl on the Train, though I’ve heard it’s good.

I have my own opinion on the lack of understanding surrounding suicide, but that’s a long conversation for another day.

BTW, W&K were at Youthscape for almost two and a half hours. 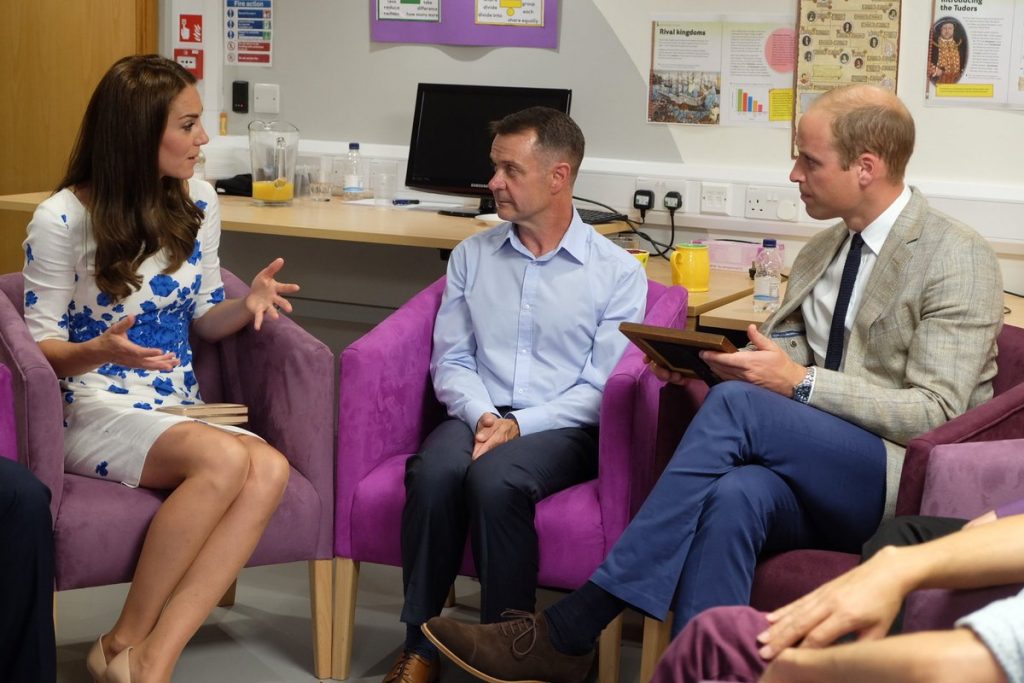 The second stop of the day for William and Kate was Keech Hospice Care where they met with patients, families, staff, and volunteers. William and Kate sat down for a discussion about bereavement and were listening to people talk about their experiences when William opened up about missing his mother.

William was listening to 14-year-old Ben Hines discuss the loss of his mother last year when William said: “I know how you feel. I still miss my mother every day – and it’s 20 years after she died.”

William ended the conversation by saying that men are not “great sharers” and making Ben and his brothers promise to keep talking to each other.

I think it’s interesting that a month after Prince Harry opened up for the first time about Diana, William opened up about her, too. 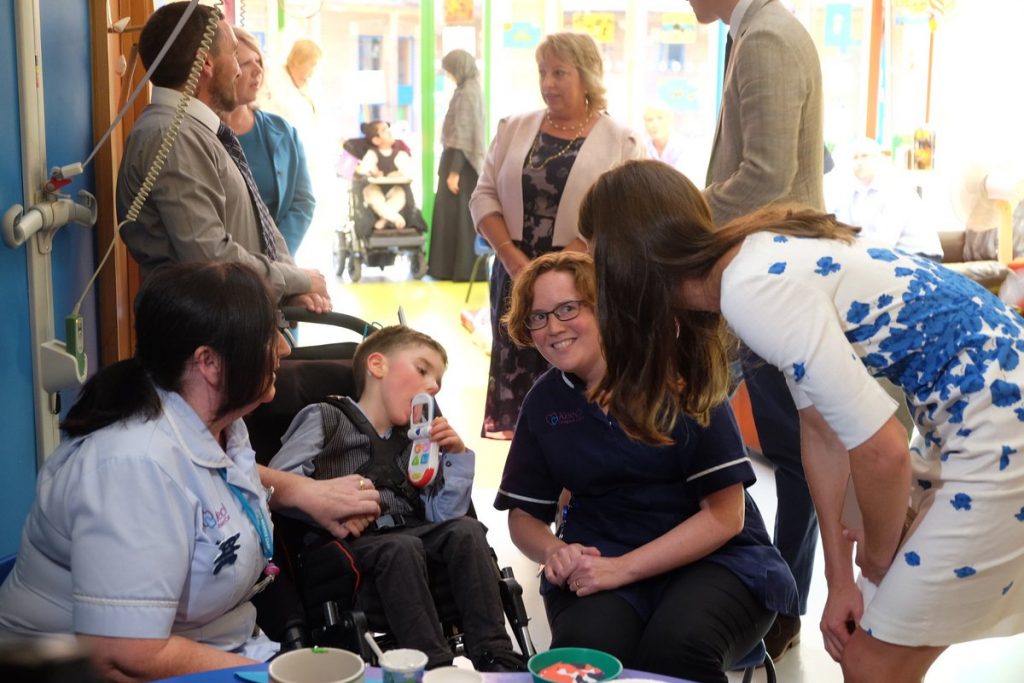 Kate had her own little moment with a 6-year-old who lost his older brother two year ago. The boy asked Kate for a hug and Kate said: “Yes of course – I love cuddles.”

Keech Hospice Care supports adults in Luton and South Bedfordshire and children and their families living in Bedfordshire, Hertfordshire, and Milton Keynes. They have their own hospice facility, but offer care in a variety of settings including in the home, school, or the hospital. Keech offers a holistic approach to patient care which includes counseling and therapy in addition to the physical care. Keech’s services is free to patients – their funding is 30% statutory sources and 70% public donations. 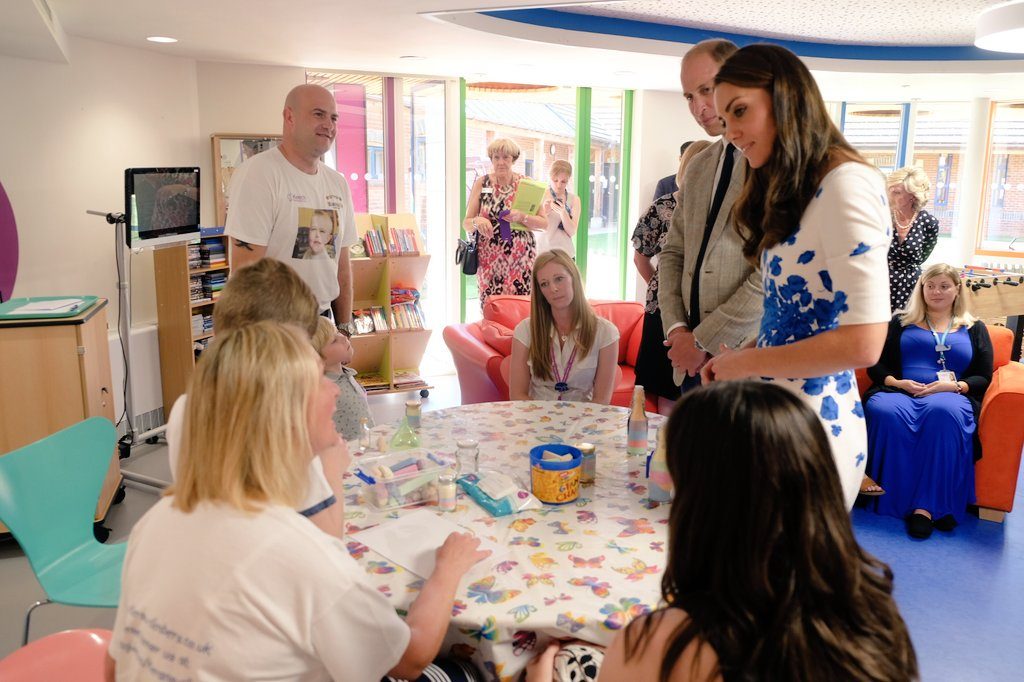 William and Kate ended their Keech visit by unveiling a plaque and cutting a cake to mark the hospice’s 25th anniversary.

William and Kate’s final stop of the day was Hayward Tyler where they toured the facility, opened the new Centre of Excellence, and presented them with The Queen’s Award for Enterprise. 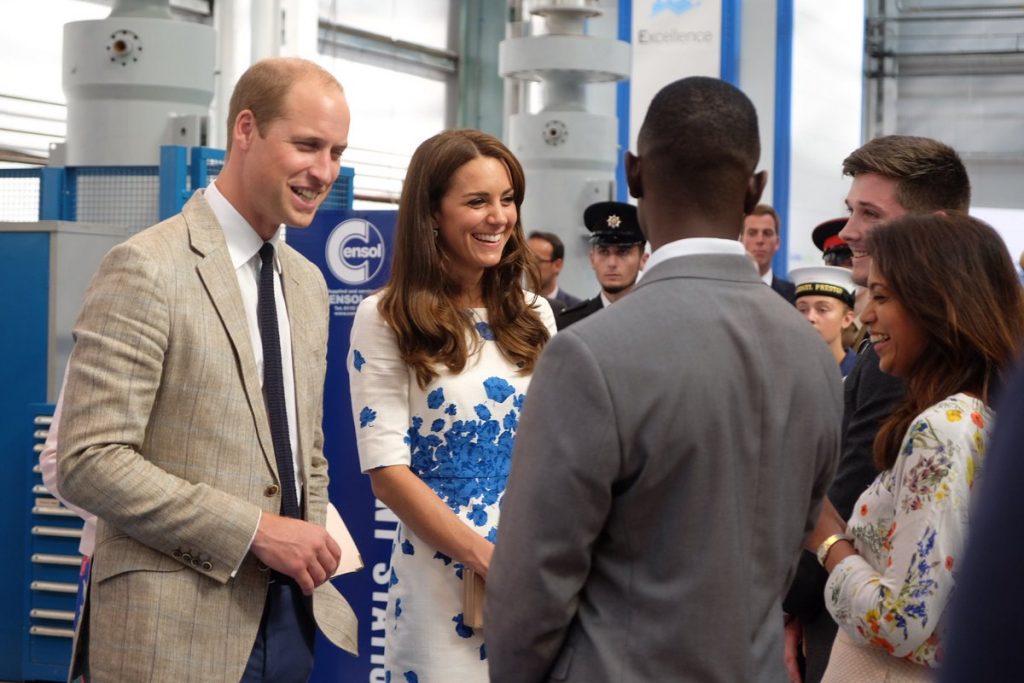 While at Hayward Tyler, William and Kate met Trish, 57, and Olivia Cruse, 27. Trish asked William for Harry’s phone number for Olivia, who is single, and William laughingly replied: “Oh no! You don’t want that!”

Then Olivia offered Kate a go at operating the “Cruser” crane (which Olivia and her father, who died last year, created), but Kate giggled: “I think William has to do it, I’ll break it.” Kate did end up pushing the button. Olivia said of Kate:

“I told her to press the button and I think she was a bit daunted by the noise but said ‘Wow, can I stop now?’ She asked me some really interesting questions and was impressed that the hydraulic motor which powers the whole crane only costs £50. She’s really lovely and it’s great that she was so interested.”

While talking to some graduate students at Hayward Tyler, this interaction went down:

“William showed off his technical knowledge, asking one: ‘Is it just hammering the hell out of a product?’

“As Kate groaned and rolled her eyes, the graduate said: ‘That’s one way of putting it!’

“William laughed and replied: ‘Excuse my lack of engineering knowledge….'”

I want video of this eyeroll!!! Kate’s eyerolls are amazing!

Hayward Tyler – which was founded in 1815 and is celebrating it’s 200th anniversary this year – designs, manufactures, and services fluid-filled electric motors and pumps for high-pressure, high-temperature applications and environments across the global energy sector. Hayward Tyler Luton has been operating from its current site since the early 1870s. 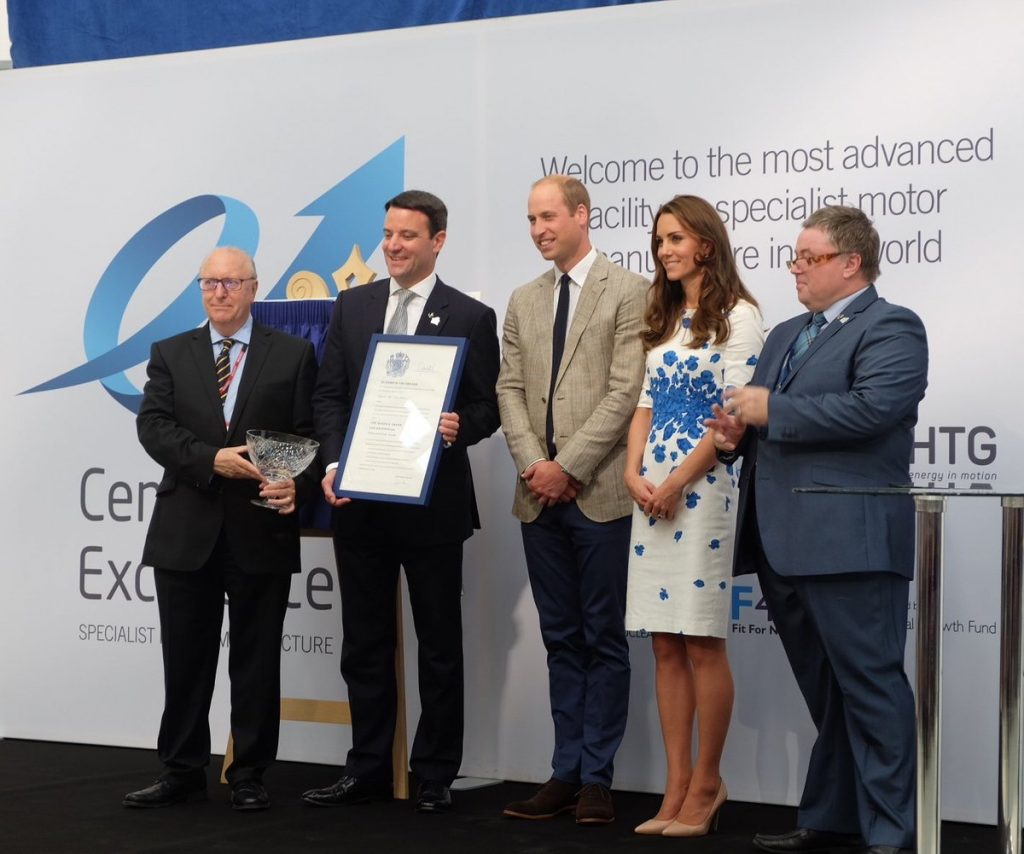 Kate brought back a favorite dress for today’s engagements: the LK Bennett blue Lasa poppy print dress. Kate first wore this dress in Brisbane, Australia in April 2014. I loved this dress when she first wore it, and for once y’all didn’t disagree with me: it won favorite NZ/Oz tour outfit and favorite 2014 dress. I still love this dress, so I’m happy she rewore it.

Her accessories, though, leave something to be desired. She wore her LK Bennett Fern nude pumps (RIP Sledges, which haven’t been seen in over two years) and carried her LK Bennett Nina nude clutch. She wore her hair down and her go-to earrings when wearing anything blue: her sapphire and diamond drops. 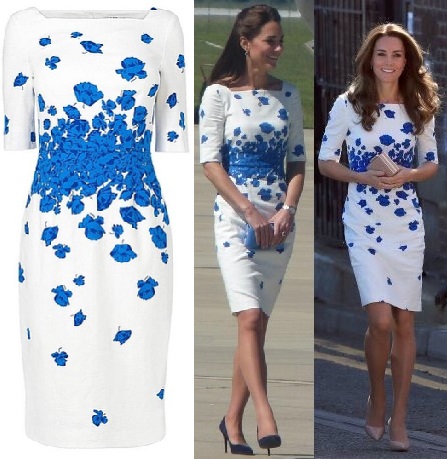 BTW, many of you have mentioned that Kate over-does her makeup, but I’m wondering if she does her makeup for the cameras – like, she does dark eyes so that her eyes stand out when photographed from a distance. I ask because even with makeup, from a distance I look like I don’t have eyelashes or eyebrows, and I was thinking that if I were photographed as much as Kate, I would probably have to wear heavy eye makeup in order to look like a normal human and not an alien. Thoughts?

Here’s a video of part of the day:

And a Rebecca Deacon sighting:

162 thoughts on “Kate Middleton and Prince William in Luton”