Kate Middleton attended her first women’s match at Wimbledon yesterday, July 7. Sophie, Countess of Wessex was also there, and the two royals got to meet tennis champion Serena Williams (who won her match and will compete in the finals). 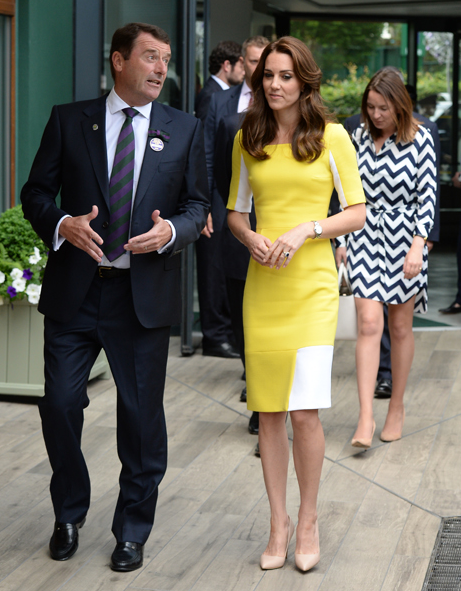 Kate repeated a Roksanda Ilincic dress which she first wore on arrival in Australia in April 2014. It’s the bespoke “Ryedale” dress in yellow and white colorblock which Prince William, Loving Husband, said looked like a banana (because it’s yellow? Does every yellow dress look like a banana? I still don’t see “banana” and I still think William came across like a jerk with that comment).

Kate debuted yet another pair of nude pumps – this time the Rupert Sanderson “Malory” Pumps in Nude Patent (£425.00). Kate also debuted a new bag from Victoria Beckham, the “Quincy” in white (was £995, on sale for £498).

Kate wore the new earrings she debuted at the Museum of the Year awards. They are the Soru Jewellery “Baroque Pearl Double Sided Earrings” (£130.00). She also wore her Cartier watch. 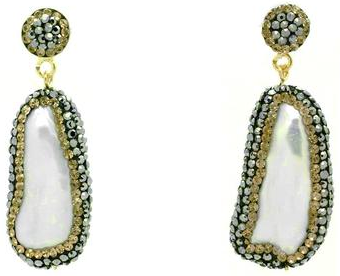 I loved this dress when Kate first wore it, even going so far as to say “This is quite possibly one of my favorite things she’s ever worn”, and that “I like her dress better than the original design in the collection.” My biggest complaint last time was the boring nude accessories, and that’s my complaint today as well. I still like this dress and still think it’s better than the one in the collection – though it’s not my favorite thing she’s ever worn – but the boring nude accessories are drab and boring. The yellow is a bright, fun color and I want bright, fun accessories to go along with it. Seriously, I want bright pink heels and a teal bag. 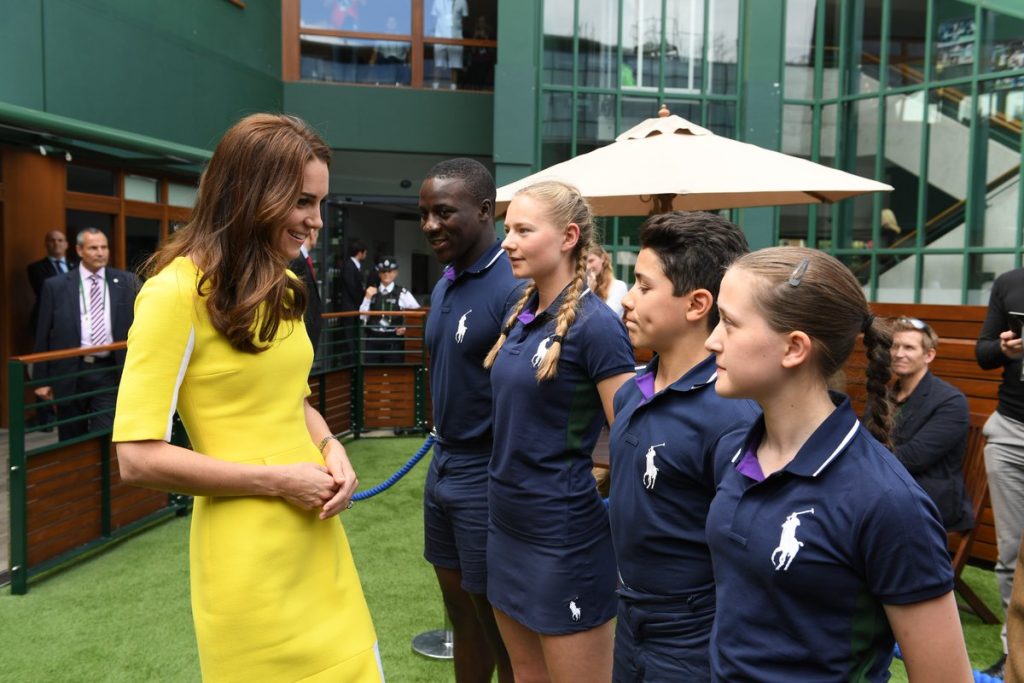 Getting to Kate’s time at Wimbledon, she did not just show up to watch the matches. Kate was greeted by the chairman of the All England Lawn Tennis and Croquet Club, Philip Brook (shown walking with Kate in the top photo and on the left below), and met with officials, staff, and ball people. 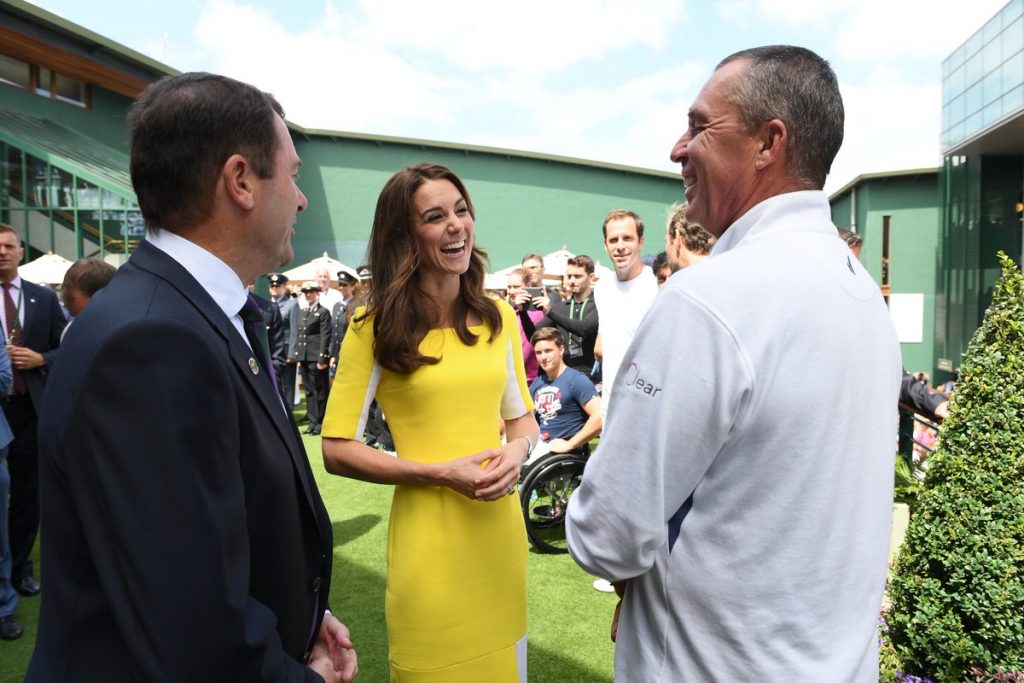 Kate also got to meet Serena Williams, who Snapchatted the encounter. Kate brought in Sophie for the video as well. This video is adorable.

Kate also met Greg Rusedski, former tennis player who retired in 2007, and talked about Prince George. Rusedski said after the meeting: “She talked about George, her little boy, playing tennis. He’s got a racket and he enjoys playing tennis, and obviously she plays with William… So they obviously enjoy the sport very much.”

I know some of you are calling Kate out for saying George is into every single thing the person she’s talking to does (and I totally agree with this for most of the things she says about George), but since Kate brought up getting George into tennis when she was with Andy Murray’s mom in Scotland, I do think Kate wants/has tried/successfully got George into tennis. 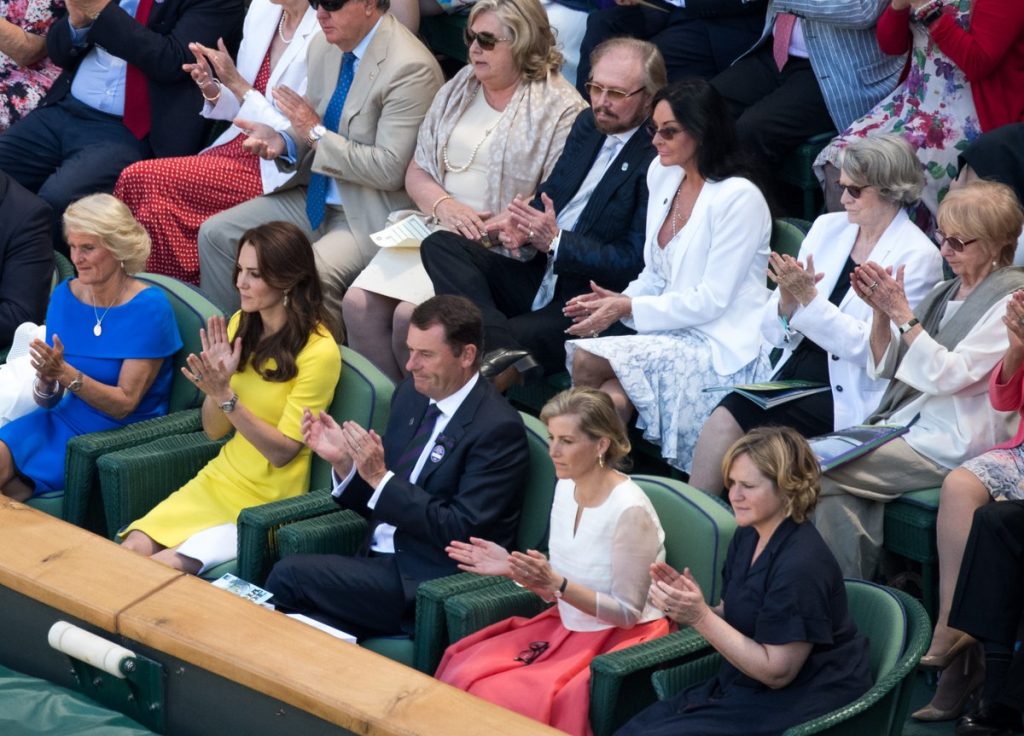 Kate took her seat in between Philip Brook and his wife, Gill Brook, to watch the match. Sophie – wearing the Suzannah separates she wore to Ascot Day 3 – sat on Philip Brook’s other side.

Yes, that is Dame Maggie Smith sitting behind Sophie in the photo above (2nd row, 2nd from the right).

And now for my favorite part of Wimbledon: Kate’s faces.