The Nook is a planned new hospice in Norfolk which is larger than previous ones and can accommodate the demand for EACH’s services. EACH is looking to raise £10 million to build The Nook, and so far they’ve raised £2.5 million. Kate attended The Nook Appeal launch back in November 2014. Yesterday’s dinner was expected to raised in excess of £100,000 with guests invited to donate to the cause (though they were not charged to attend).

The gala dinner at the stately home of the Marquess and Marchioness of Cholmondeley featured a champagne reception, and a special five course meal prepared by five Michelin-starred chefs. The Treehouse Choir performed after the dinner, followed by a speech from parent Charlotte Markham. Author and EACH Ambassador Anthony Horowitz OBE and The Marquess of Cholmondeley gave speeches to close the evening.

“I feel a little bit like Mussolini standing here. The Duchess is a wonderfully active, involved and enlightened royal patron to EACH: it’s a pleasure to see her. And I only hope the Duke has a more satisfying evening than he had on Monday night at Saint-Etienne. So much effort for so little result – let’s hope we can’t say the same about tonight.”

[all quotes from Express] 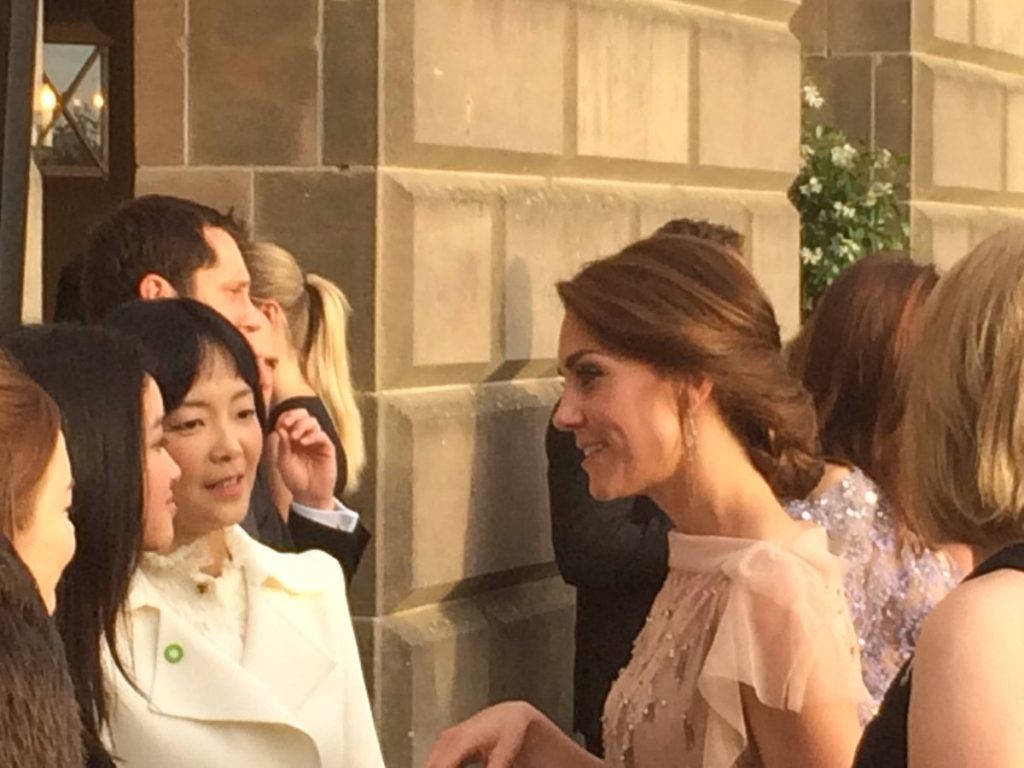 When meeting the chefs, Kate said: “William has to put up with my cooking most of the time.”

To which William replied: “It’s the reason I’m so skinny.”

I don’t get the joke. Is William shading Kate’s cooking skills, or is he trying to imply that she only cooks healthy meals?

I wish this event had been better attended by the press and photographers because Kate repeated a gown that many people like: this Jenny Packham pearlescent sequin gown from the SS11 collection. Below is Kate wearing the gown in 2011.

Kate upped her jewelry game for the gown repeat, though. Wearing the diamond chandelier earrings on loan from the Queen, and Queen Mary’s Diamond Choker Bracelet.

The Choker Bracelet was worn as a choker by Queen Mary, and converted to a bracelet by the Queen Mother. Since this is Kate’s third time wearing it (she first wore it to the Chinese State Dinner in October 2015, and wore it to the 2015 Diplomatic Reception as well), I’m wondering if this is a “lifetime loan” situation from the Queen like the earrings seem to be.

Kate also wore an updo which she didn’t do in 2011. Another fashion win here for Kate: I think she looked great in a fantastic gown, I like the addition of the larger jewels, and I like the updo.

In case you were wondering, Rose, the Marchioness of Cholmondeley (pictured below walking with Kate) wore a dress from Valentino’s Resort 2016 Collection.

Kate added another event to her schedule: She will present the Art Fund Museum of the Year 2016 prize at a dinner hosted by the Natural History Museum on July 6.