Here’s some other Kate-related stuff which I didn’t want to clutter the BP Garden Party post with. Kate Middleton‘s message of support sent to ICPCN last week was released by EHospice and it’s longer and more specific than any of the messages she’s sent to EACH. Also, Kate was spotted out and about with Prince George and Princess Charlotte this week.

“When families are confronted with the shattering news that their child has a life-limiting condition, their world can fall apart.

“For those facing this awful reality, access to hospice and palliative care services can transform their quality of life and help families to make the most of the time they have together. I have had the privilege to see this transformational work for myself both in the UK, and through visiting inspirational hospices in Malaysia, Australia and New Zealand.

“With each of these visits, what has consistently been clear to me is that while circumstances and environments can differ across the world – those involved in providing palliative support to families are united in their aim to provide the best and most loving care possible. I have also been struck by their willingness to work together, and have seen the impact this can have. When healthcare workers share resources and expertise across borders, it can transform care services for organisations, and the families in their care.

“I would like to thank the International Children’s Palliative Care Network membership for being the global advocate for children needing palliative care, and working to ensure that children and families across the world have a chance of accessing this vital lifeline.

“I wish all the delegates a successful conference and a special time together – to learn, share and plan together for the benefit of children everywhere.”

This letter interests me more than the other stuff because I am genuinely interested in seeing Kate succeed, seeing her get better, and I want to compare all of her messages of support she sends. I want to say this is one of her better ones in that it is longer and more specific, and doesn’t seem to be a retread of all of her other letters. But the punctuation is making me stabby. Considering I doubt Kate writes any of these messages herself, this really falls to Rebecca Deacon. She’s the one to blame for the consistent laziness of the content, punctuation, and grammar. This one is at least better in the content area, I guess.

The photo used with the letter seems to be part of a set of new official photos taken by Chris Jeff of Kate and Prince William. The photos have not been formally released, but those who wrote to William and Kate for their 5th wedding anniversary last month can see another new photo from that set. In case you’re wondering, the back of the card reads: “The Duke and Duchess of Cambridge were so touched that you took the trouble to write as you did on the occasion of their 5th Wedding Anniversary. It really was most thoughtful of you and Their Royal Hignesses send you their warmest thanks and best wishes.”

Lovely thank you card received from TRH The Duke & Duchess of Cambridge for their 5th Wedding anniversary pic.twitter.com/YXKpytnZvC

As for those new photos of Kate with her kids, Kate was seen out walking around the gardens of Kensington Palace with George and Charlotte (who was in a stroller) on Monday before the Chelsea Flower Show. According to Hello:

“Kate dressed down for her off-duty outing, wearing a full-length blue skirt and matching top. She wrapped a cream jumper around her shoulders and accessorised with a pair of sunglasses.

“Kate and her children seemed to be accompanied by one protection officer, who held back and let the mum enjoy some private bonding time with her kids. According to onlookers, the friendly royal waved to passers-by as she strolled past.”

Kate wore a Great Plains Cezanne Pleated Dress (£75.00) in Ebony Navy Combo. This is the third Cezanne dress Kate owns – the other two are brown and green. 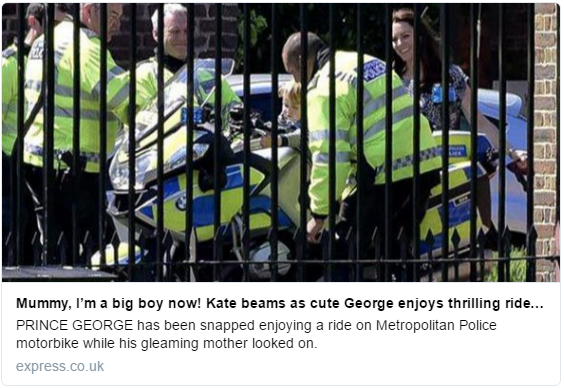 You can just see Kate’s left hand on the stroller on the far right side of this image.

After their duties in London were over, William and Kate took off in a helicopter to head back to Anmer Hall. Even after that ruckus over Kate taking a helicopter back in February they’re still using the helicopter to travel to and from Anmer.