Fashion Jewelry Kate Middleton
May 4, 2016May 12, 2016 by katemiddletonreview117 Comments on Kate Middleton reveals she has a hamster at Hampton Court Palace, visits Anna Freud Centre

Kate Middleton, Duchess of Cambridge did some stuff today, May the 4th Be With You, and didn’t bother to wear even one Star Wars related item. How dare she. Instead, she repeated a bunch of previously worn items to visit the new Magic Garden at Hampton Court Palace, to attend a reception at the Anna Freud Centre (her first visit as Patron), and to view the Vogue 100 exhibition at the National Portrait Gallery. 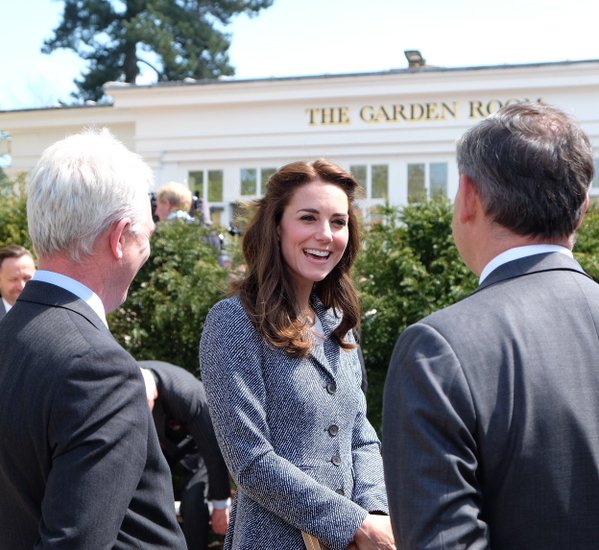 Kate started her day at Hampton Court Palace – former home of King Henry VIII – where she viewed the recently opened Magic Garden and unveiled a plaque commemorating her visit. It’s a really beautiful plaque. Of all the plaque’s I’ve seen royals unveil, this has got to be the prettiest.

Hampton Court’s Magic Garden is “a new and unique way… to explore the palace’s past. Set within King Henry VIII’s former Tiltyard, where the elaborate spectacle of the Tudor tournament played out, the new garden takes inspiration from the fairy-tale-like quality of the Tudor Palace.” 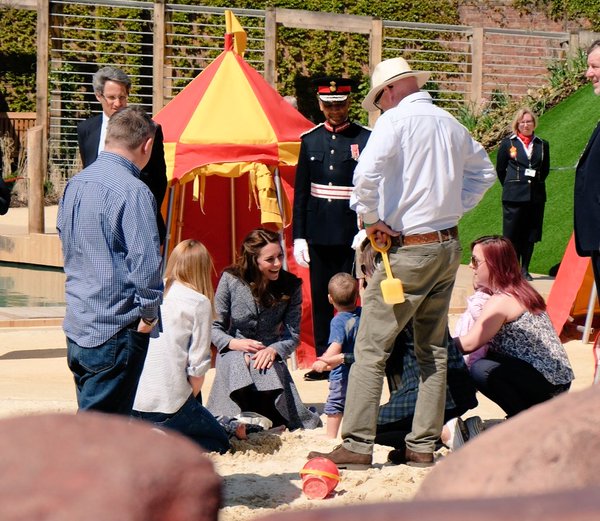 Princess Charlotte apparently likes Marvin’s whiskers tickling her face. One of the kids Kate chatted to said: “She said she had a hamster, and Charlotte really likes it because the whiskers always tickle her face.”

Ah man, Princess Estelle is going to be so bummed that the Cambridge kids got that hamster she wanted and all she got was a baby brother.

I saw several people say that they thought this Magic Garden visit would have been a fantastic visit to bring Prince George to, and I have to agree. I’m sure George would have loved to play there, and it would have been a great way to introduce him to royal duties while still in a safe, fun environment (kind of like when the Wessexes brought their kids to the zoo). But since this visit would have been perfect for George, of course Kate didn’t bring him. Instead, she used him as a talking point. Again.

“The Duchess spoke to Elodie and Olivia, both eight, from St John the Baptist Church of England Junior School who were sitting on top of the plastic and clay dragon.

“Elodie said: ‘She asked us what lessons we were missing and how school is. She said George would love the dragon but he would be a bit scared.’

“Olivia added: ‘It was very exciting. She looked like a very rich lady.'” 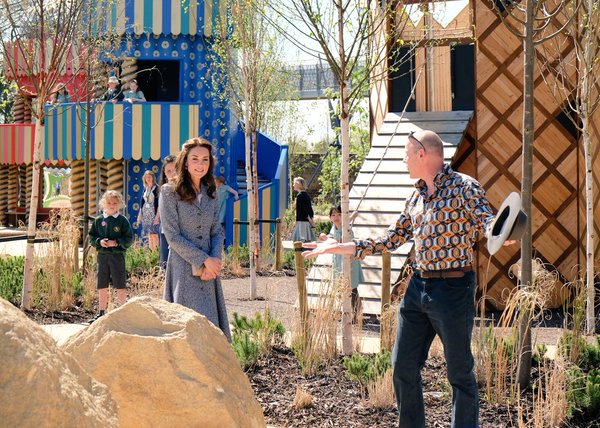 Though Prince William and Kensington Palace insist on calling Kate “Catherine”, Kate told a little girl to use “Kate” instead.

“As Kate, wearing a coat by Michael Kors, toured the garden, a small girl tugged on the sleeve of the chairman of Historic Royal Palaces, Rupert Gavin, pointed at the duchess and asked him: ‘Who’s that?’

“‘The Duchess of Cambridge’, he replied.

“Mr Gavin said afterwards: ‘Then the child said, ‘Ooh, are you the princess?’ 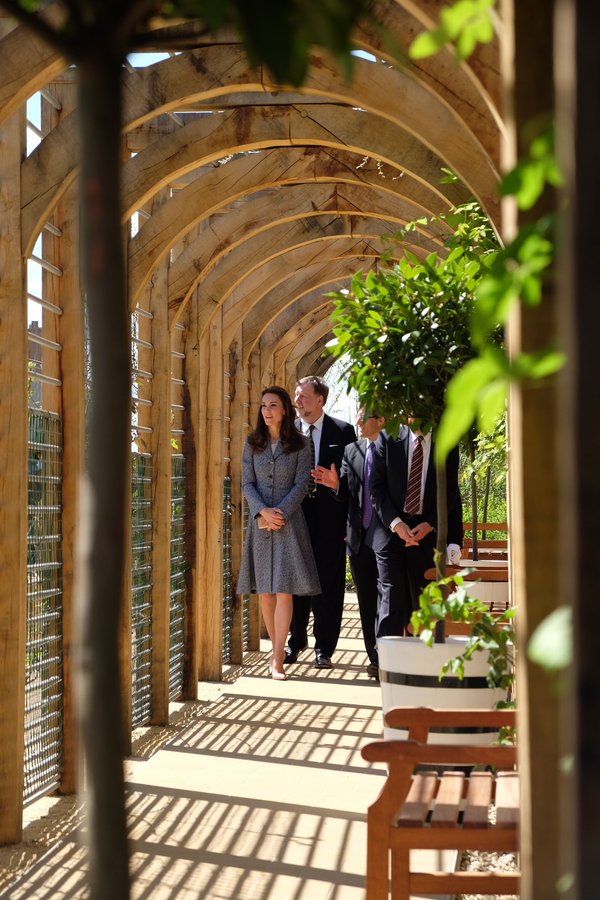 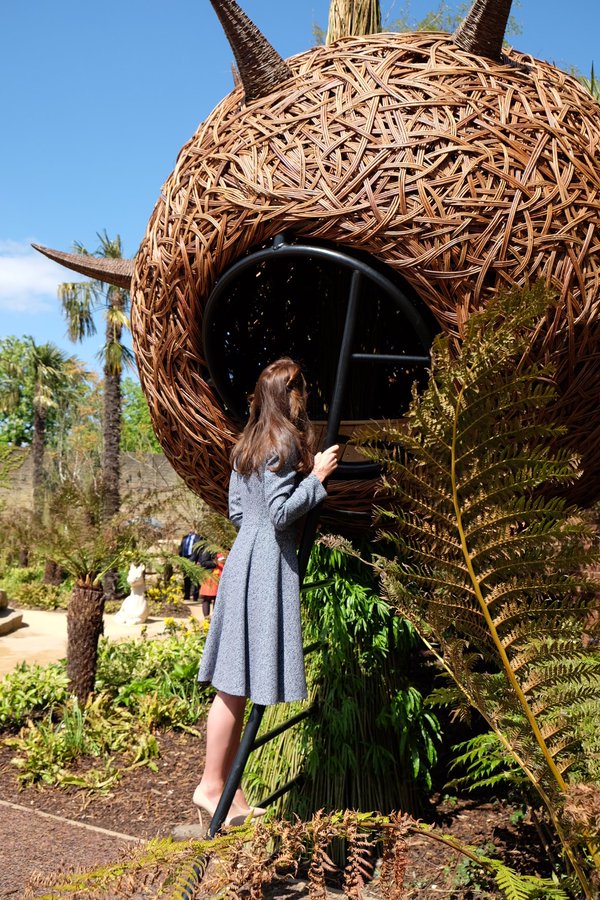 There was also a cake that I’m sure Kate didn’t eat. 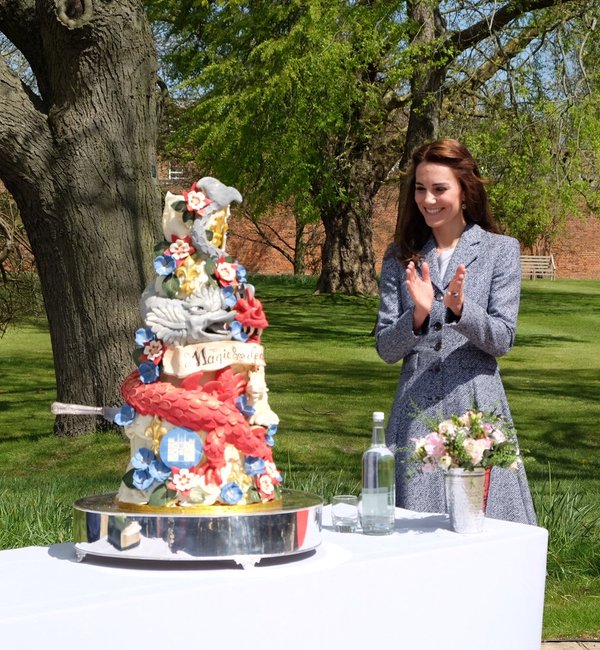 Here’s a video of Kate touring the Garden.

Kate wore her Mappin and Webb “Empress” earrings and pendant, and her LK Bennett “Fern” pumps – I guess these are 2016’s Sledges since she’s worn them so much lately. Kate also carried a new clutch, also LK Bennett, the “Nina” in trench. 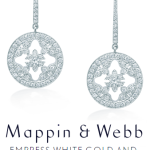 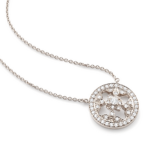 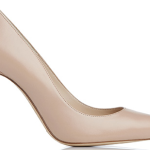 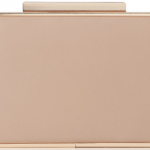 Even with the Demented Bunny hat I still prefer the 2014 styling to today’s. It’s a super boring coat, and the navy accessories and anemone brooch add some interest that today’s nude accessories don’t. Also, this coat seems way too heavy and winter-y for today’s event.

After her visit to Hampton Court Palace, Kate attended a lunch reception at London’s Spencer House as Patron of the Anna Freud Centre. The reception was in support of the development of a new center of excellence for children’s mental health. Kate met families who have benefited from the Centre, as well as supporters, and saw a short film about the ambitions of the organization. 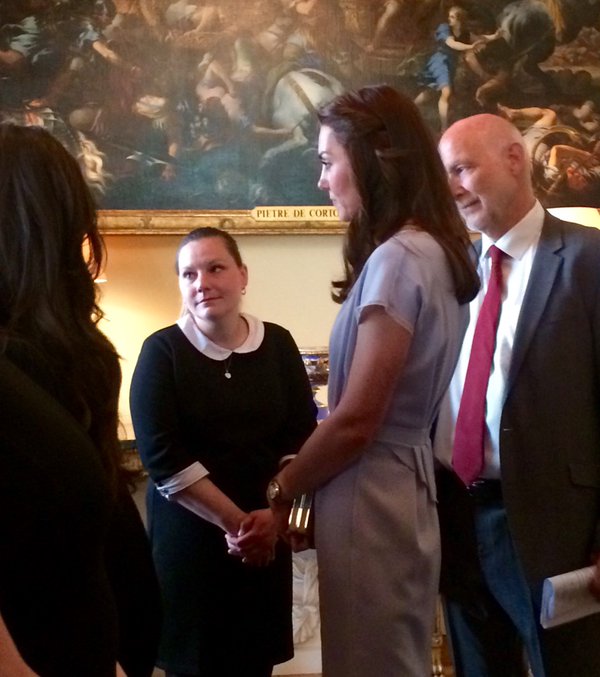 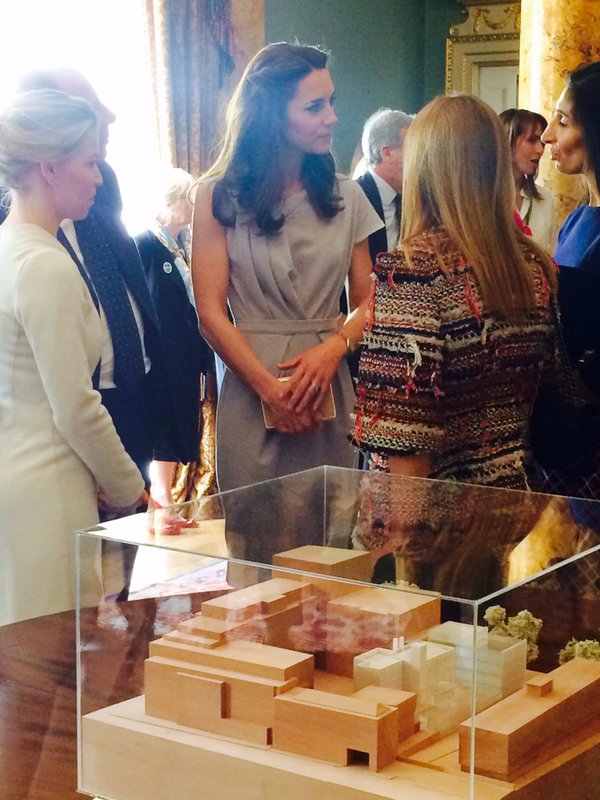 It’s so rare that we hear what Kate says to people, because she speaks so quietly and the videos are usually taken from farther away, but on this video, starting at 0:38, you can hear Kate ask one parent: “What was it that the center provided you and your son with that really helped him thrive now at school?”

Kate took off her coat for the reception, revealing her Roksanda Ilincic “Peridot” dress and Cartier watch. This is the third appearance of this dress. Kate first wore it in July 2011 arriving in LA, then repeated it in July 2012 at a reception at the Royal Academy.

This dress is pretty, but I’m kind of “meh” on all three styling options since that all look so similar. I guess I prefer the one where her hair is up, but it needs a brooch or some pop of color in the accessories.