Royal Rewind: The Wedding of Prince William and Catherine Middleton

Today, April 29, marks the fifth wedding anniversary of the Duke and Duchess of Cambridge. In honor of their anniversary, I thought I’d do a royal rewind to their wedding day when they were plain old Prince William and Kate Middleton. I’m including a look at the royal wedding guests as well.

The royal wedding coverage on April 29, 2011 started at 3AM here in the US, and though I was interested in watching the wedding, I wasn’t that interested. I DVR’d the event and watched it later. It’s so weird thinking back to 2011 when I had such high hopes for the newest British royal, and had no idea there were any foreign royals in the building because I didn’t even know the foreign royals existed. My how things have changed.

The night before the wedding, Lady Elizabeth Anson hosted a pre-wedding dinner at the Mandarin Oriental hotel for the royals, both British and foreign, who were in town for the wedding. There were a lot of royals, with a lot of gowns, and this event could get it’s own post. But for the purposes of this one, I’m only including a few royals in gowns that I really liked. Both William and Kate skipped this dinner, but the way.

Crown Princess Victoria and Prince Daniel. Victoria’s red Escada gown is a favorite of mine, not just on Victoria but in general. It’s so beautiful. Basically, wanting to look at this dress is why I included the pre-wedding dinner in this post at all.

King Felipe and Queen Letizia, then Prince and Princess of Asturias, with Queen Sofia. Letizia chose a purple-ish grey, embroidered Felipe Varela strapless ballgown. This is one of my most favorite looks from Leti, to be honest.

I really like Queen Elizabeth‘s blue gown here. We so rarely see her in color gowns anymore, so this was nice to see.

But Holy Boob Flaps, Batman! on Sophie, Countess of Wessex. I realize she had a broken rib at the time, but that doesn’t excuse the boob flaps. BTW, I’m including this photo mainly to point out that, yes, I do criticize more than just Kate’s boob flaps. No boob flaps are safe from my criticism!

Now moving on to the actual wedding. I’m including several royal wedding guests, but not all of them (again, there were so many they could fill their own post). I’ll be honest with you, when I watched the wedding in 2011, I thought it was so odd that everyone was wearing hats. This was my first introduction to the world of ladies wearing hats to events like this.

The Queen, Camilla, Duchess of Cornwall, and Carole Middleton with their men, Prince Philip, Prince Charles, and Michael Middleton.

The Queen wore yellow Angela Kelly; Camilla wore blue and pink Anna Valentine with a Philip Tracey hat; and Carole wore blue Catherine Walker. Say what you will about Carole, but she did look really nice this day.

Sigh. I feel so badly that these girls got so made fun of after this wedding. They really didn’t deserve it. Princess Beatrice wore Valentino while Princess Eugenie wore Vivienne Westwood and of course their Philip Tracey hats.

Sophie wore Bruce Oldfield and Princess Anne wore a purple dress with a purple and green coat on top.

Crown Princess Victoria wore peach Elie Saab with matching peach shoes and hat. I love this on her; she looks fantastic. Queen Maxima wore a lace Valentino skirt and top in a pink-ish beige color. She looks lovely but I still think I prefer Victoria’s.

Queen Sofia wore purple Margarita Nuez while Queen Letizia wore pink Felipe Varela. Leti so rarely wears hats, but she does look good in this one. Princess Charlene in Akris. I left this off of my Style Retrospective because 2011 was full of her own wedding gowns, but this is a great look from Charlene.

Autumn Phillips wore a pretty purple Sassi Holford coat. And for those who still love Chelsy Davy, here she is looking a total mess in custom Alberta Ferretti. It looks like Chelsy partied hard the night before and didn’t bother to fix her hair or makeup before coming to the wedding.

Kate’s sister, Pippa Middleton, served as chief bridesmaid. Pips’ Sarah Burton for Alexander McQueen gown was an ivory satin-based crepe with a plunging cowl neck. I remember adoring this dress in 2011 – like, I liked it better than Kate’s gown – but five years later I’m not liking it as much. It’s the cowl neck that I’m not liking.

Padded or not, I still don’t get why people cared so much about Pippa’s bum after this wedding.

Here’s Prince Harry, in his Blues and Royals uniform, with Lady Louise Windsor.

Now on to the main attraction.

Catherine Middleton went with British designer Sarah Burton for Alexander McQueen for her wedding gown. The ivory satin gazar gown was Victorian-inspired with a structured bodice, padded hips, and a semi-bustle in the back (which was meant to look like a flower). The bodice featured lace appliquéd on to tulle with a floral motif (roses for England, daffodils for Wales, thistles for Scotland, and shamrocks for Northern Ireland), and 58 buttons in the back. The dress had a 3 meter (over 9 feet) long train.

Prince William wore his red Colonel of the Irish Guards uniform for the first time (he was made a royal colonel earlier that year). He also wore the Order of the Garter and his QEII Golden Jubilee Medal.

I was a bit disappointed in 2011 when I saw this dress. I’ve since fallen in love with a couple other royal wedding gowns, but this one is actually a solid choice for Kate. 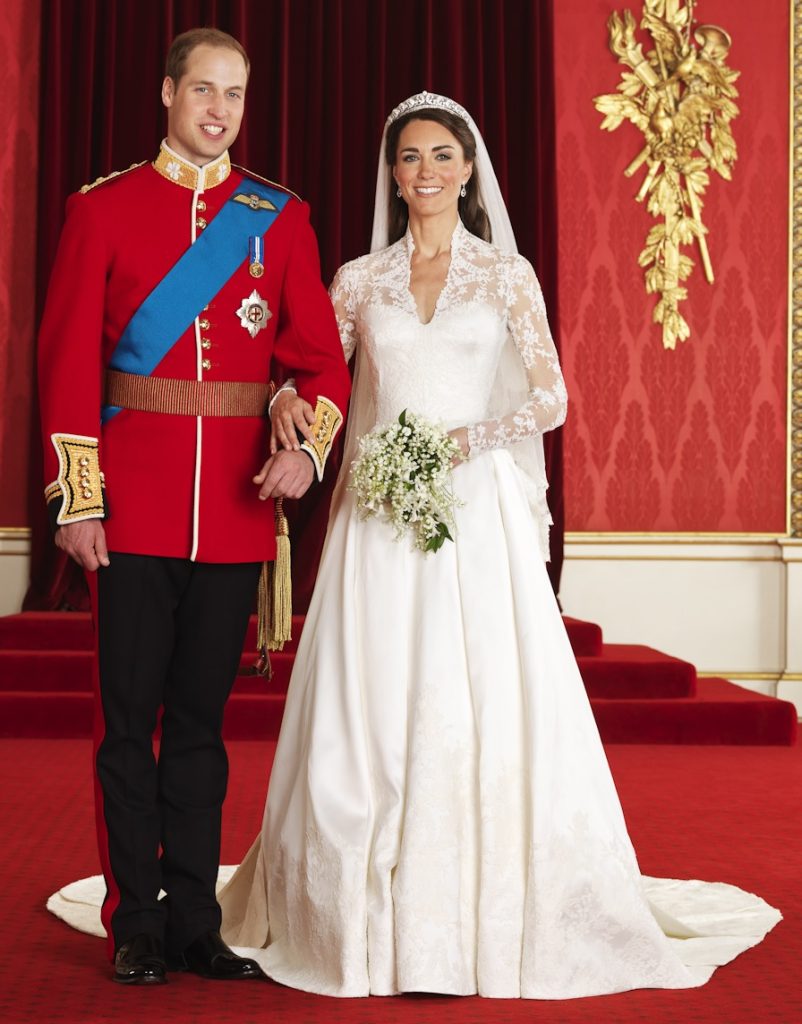 [The Duke and Duchess, pictured in the Throne Room. Photo: Hugo Burnand]

The younger bridesmaids and pageboys – L-R: Grace van Cutsem, Lady Louise Windsor, Eliza Lopes, Tom Pettifer, William Lowther-Pinkerton, the Hon. Margarita Armstrong-Jones – were dresses in mini Foot Guards from the Regency period featuring the insignia of the Irish Guards (for the boys) or Nikki Macfarlane creations of ivory and white dresses with full ballerina skirt and a pale gold sash (for the girls). 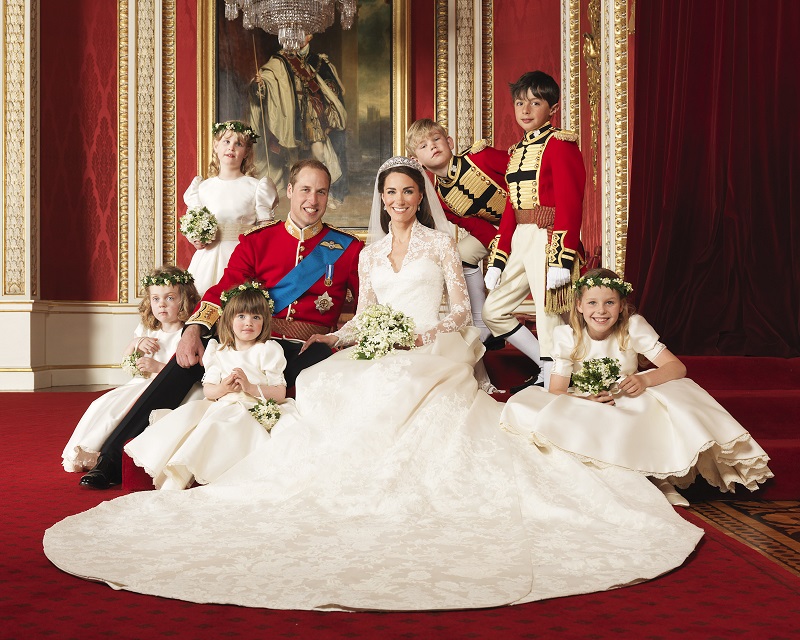 [The Duke and Duchess and wedding party, pictured in the Throne Room. Photo: Hugo Burnand]

Kate anchored her short veil of ivory silk tulle and embroidered lace on the edge with the Halo Scroll Tiara – which was made by Cartier in 1936 and purchased by King George VI (then Duke of York) for the Queen Mother (then Duchess of York).

Kate’s parents bought her custom-made Robinson Pelham diamond oak leaf and acorn earrings. The oak leaf and acorn are ties to the Middleton family Coat of Arms – which features three acorns – and the earrings are made to resemble the scroll pattern in the Halo Scroll Tiara. I’d love to see Kate break out these earrings again, but since they are so closely tied to the Halo Tiara I wonder if we will ever see them again.

William and Kate’s eight-tiered wedding cake was made by Fiona Cairns. The fruit cake was covered in cream and white icing and decorated with up to 900 delicate sugar-paste flowers. They used the Joseph Lambeth technique of cake decorating where intricate piping is used to make three dimensional scroll work, leaves, flowers, and other adornments. 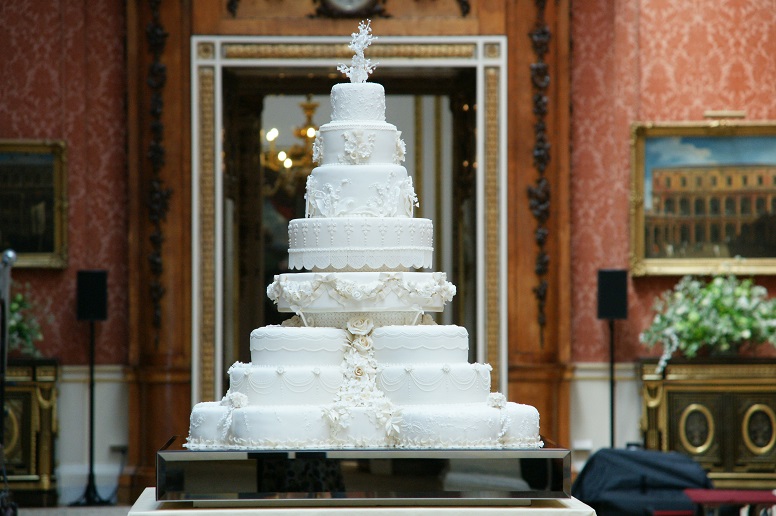 The groom’s cake was made by McVitie’s Cake Company. The chocolate biscuit cake was made from a Royal Family recipe and was specifically requested by Prince William. 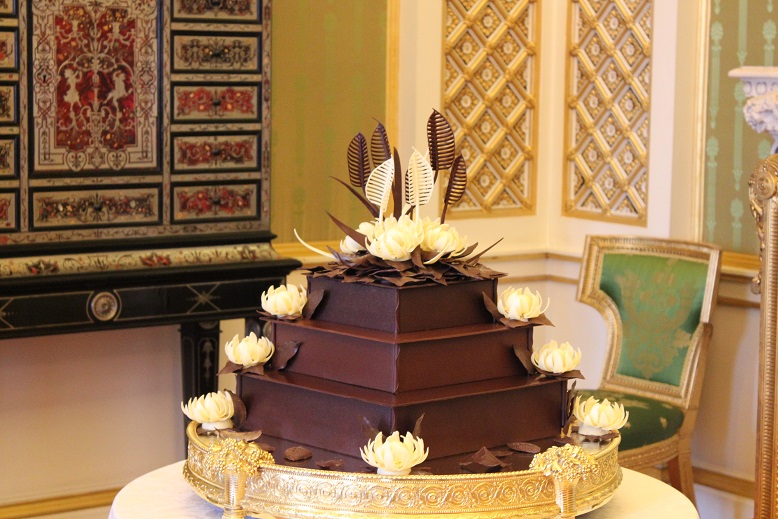 Here is a video of the wedding, in all it’s 3 hour 37 minute glory.

250 thoughts on “Royal Rewind: The Wedding of Prince William and Catherine Middleton”