Day 4, April 13, of Prince William and Kate Middleton‘s royal tour of India was the most “vacation” of the entire tour so far. The Duke and Duchess of Cambridge took a safari tour of Kaziranga National Park before meeting local villagers living near the park. They then visited Centre for Wildlife Rehabilitation and Conservation and Elephant Family.

PS. Yes, I know William and Kate are already in Bhutan now; keeping up with their schedule is a bit difficult due to the time difference.

First on the agenda was their safari tour around Kaziranga National Park. The took an open air jeep around the park. Supposedly Kate took photos on her own camera. I wonder if KP will release those photos the way they did Kate’s photos after the SE Asia tour.

PS. Jason, to quote you, “William will speak out against rhino poaching” after they meet park rangers. Um… What happened to that? There was no speech at all on Day 4. 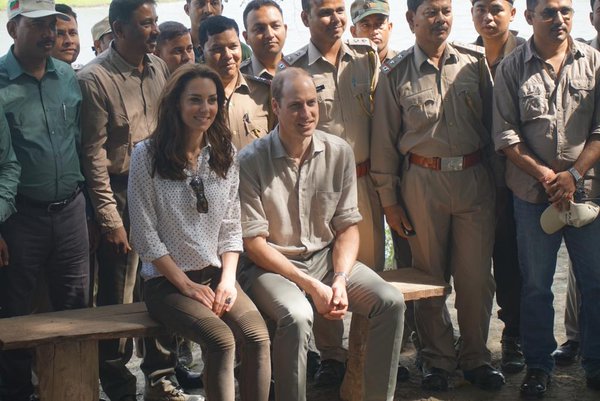 Kaziranga National Park is a World Heritage Site which hosts two-thirds of the world’s great one-horned rhinoceroses. Kaziranga also boasts the highest density of tigers among the protected areas in the world and was declared a Tiger Reserve in 2006, and is home to large breeding populations of elephants, wild water buffalo, and swamp deer. The park sits in two districts of Assam and covers 170 square miles (430 square kilometres).

Kate wore pants! Skinny jeans, but they’re still pants. Kate chose Zara “Mid-Rise Biker Trousers” ($49.90). Kate paired them with a new RM Williams “Gretna” white ruffled blouse with blue and gold diamond design from the AW14 collection. According to Kate’s Closet, who contacted the designer, the shirt was a gift during the 2014 NZ/Oz tour.

Kate wore her Kiki McDonough Citrine drop earrings and her Sebago Bala boat shoes with an “Indian Embroidered Stole” in beige from Flora Garments (£180.00). Flora is a UK brand but the stole was made in India.

Kate changed to visit Pan Bari Village to meet villagers and discuss challenges of living near the park. 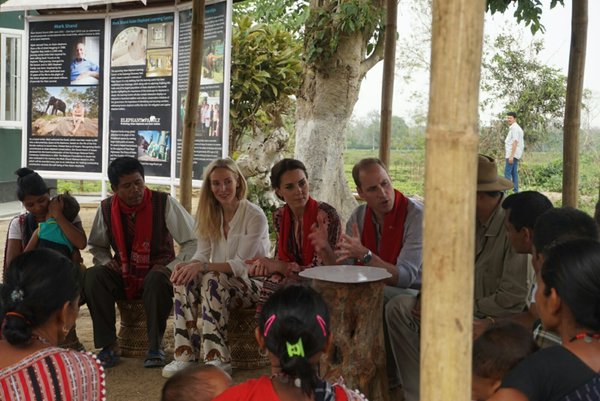 The couple walked through a tea garden before meeting women working at a traditional weaving loom.

William and Kate did some sort of walkabout to meet the villagers who came out to see them. Kate also got her hands kissed and a hug from a woman.

Kate talked about Prince George and Princess Charlotte and said she was sad because she missed her kids.

“The Duchess told locals that Prince George is very cheeky, and said seeing all the little girls dancing in the village reminded her of Princess Charlotte.

“She said she is feeling sad today because she is missing her children, but added that she will bring George and Charlotte with her next time she visits India.

“When asked by elders why they had not bought George or Princess Charlotte with them, Kate replied: ‘Because George is too naughty. He would be running all over the place. The next time we come we will definitely bring them.'”

I want to preface this with the fact that I know parents miss their kids when they are apart from them for any length of time and that it’s perfectly normal and I’m not judging Kate for that at all. Having said that, is it just me or is it pretty darn rude to tell the people of the country you’re on an official visit to that you are sad to be there because you miss your kids? Sure, it’s perfectly normal to miss your kids, but maybe don’t say or imply that you’re sad to be where you are when all these people have come out to see you.

William and Kate next visited the Centre for Wildlife Rehabilitation and Conservation at Kaziranga National Park where they fed baby elephants and rhinos.

The Centre for Wildlife Rehabilitation and Conservation (CWRC) is the first rescue and rehabilitation centre near a protected area in India. SWRC was established in 2002 as a way to stabilize displaced animals before releasing them back into the wild. CWRC takes in all type of animals, but since William’s conservation work focuses on elephants and rhinos, they spent their time with orphaned elephants and rhinos which the CWRC takes in, rehabilitates, and returns to the wild.

I haven’t been envious of their tour until now. These babies are adorable and this looks like a super fun vacation.

The final stop of the day was to Elephant Family where the Cambridges drank tea and painted an Elephant Parade statue to launch the Parade. Elephant Parade will see 200 elephants decorated and placed in 200 locations across India. 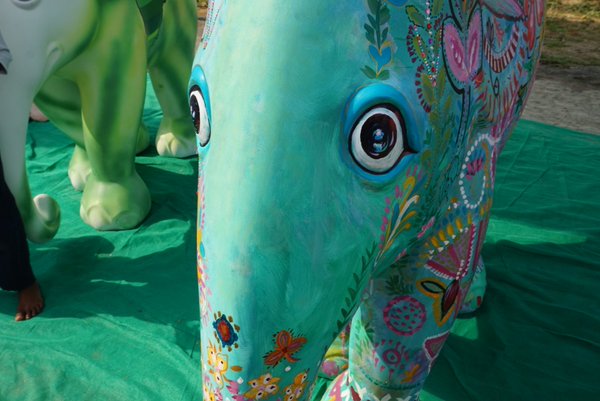 Elephant Family, co-founded by Camilla’s brother Mark Shand, is a non-government organization which works to save elephants from extinction by funding over 150 field projects in six elephant range states: India, Thailand, Indonesia, Myanmar, Cambodia, and Malaysia. They fund work and research of leading environmentalists and grassroots conservation organizations to save the Asian elephant’s habitat, and in doing do help the tiger, rhinos, and other wildlife that share that habitat.

Kate wore another print, this one by Topshop, the “Embroidered Smock Dress” (£75.00). She accessorized with her Accessorize Filigree earrings we’ve seen several times this tour, and her Pied-a-Terre Imperia wedges in black.

I like this dress; I think it’s cute. The only thing that maybe would stop me from buying it for myself is that there is just a tad too much black on the bodice (which makes it look rather boxy), but otherwise I think it’s super cute.

Here are some more photos from the Park.

140 thoughts on “Prince William and Kate Middleton go on safari”