The Duke and Duchess of Cambridge, Prince William and Kate Middleton, started Day 3, April 12, of their royal tour of India in New Delhi visiting Salaam Baalak Trust before having lunch with the Indian Prime Minister Narenda Modi.

I’m going to start with the meeting with the Prime Minister just because I want to say something nice about Kate’s outfit.

I said in my last post that I don’t like Temperley designs, and I stand by that, this Temperley London “Desdemona Lace Dress” in jade ($1,395) is too fussy for me in terms of the lace elements but I absolutely adore this color and think it looks fantastic on Kate (and it’s a departure from her norm which is fun to see). I think Kate’s LK Bennett “Fern” pumps and “Natalie” clutch go perfectly with it, and I even like Kate’s new Kiki McDonough “Green Tourmaline and Green Amethyst Oval Drop Earrings”
(£3,500.00). And the updo looks great. While I personally dislike Temperley, overall I think this is a fashion win for Kate. So, yay.

Earlier in the day, William and Kate visited Salaam Baalak Trust which is “an Indian non-profit and non-governmental organization which provides a sensitive and caring environment to street and working children and other children on the margins of society. It seeks to dissolve the barriers that rob children of the opportunity to realize their rights.” They also provide health and mental health care. The Trust was set up in 1998 using the proceeds from the 1980 film Salaam Bombay which depicts the lives of vulnerable street children.

The couple visited a contact center near the railway station to see how the Trust helps children arriving alone to New Delhi, and met children from one of the Trust’s temporary shelter for boys. They also met City Walk Guides and met with outreach workers and psychiatrists who work in the Trust’s mental health care program. 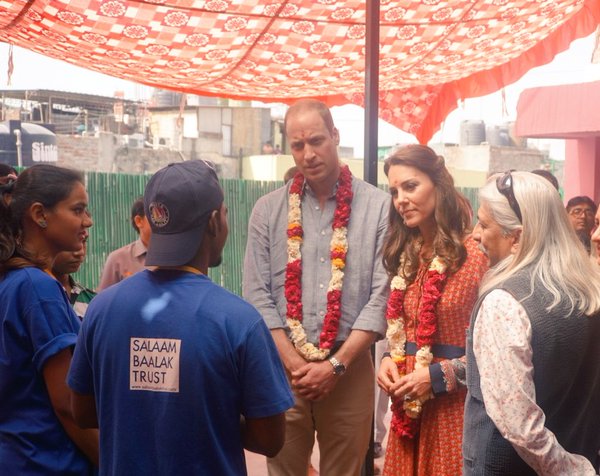 “The charity’s director Sanjoy Roy told the couple about the charity’s work. ‘The boys come here for four hours of lessons and some food every day. When they’re not here, they’re at the railway station.’

“Mr Roy replied: ‘Yes so they try to stick together. We look after around 7,000 kids a year, but every day around 40 to 50 new children arrive at the station. They often have to deal with trauma, learning difficulties, ADHD and we have special programmes to help them with that. These children that we look after are the most vulnerable. Some may have their eyes gauged out or hands hacked off. The primary reasons they run away from home are misunderstanding with step-parents, physical and mental abuse, incredible poverty or a life event such as forced marriage.’

“William asked: ‘What can we do to help?’

“Mr Roy replied: ‘Spread the word. People think of them as street kids, beggars, thieves but they are just children. They deserve an education, future and a life. They have a right to a childhood.'” 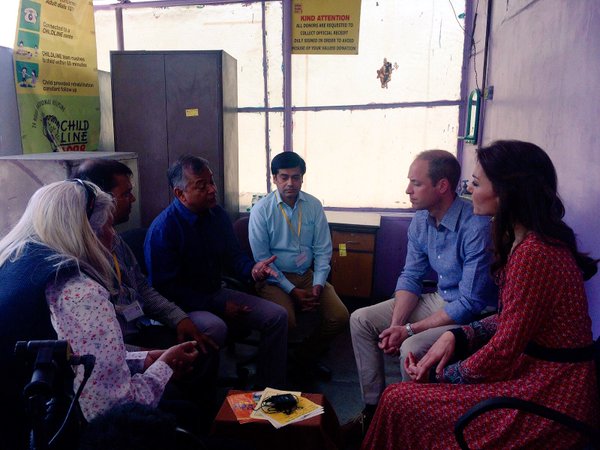 More from the Express:

“As part of their mission to highlight mental health issues, the couple were very keen to learn about how the subject is viewed in India.

“Kate asked: ‘What’s society’s view on mental health? Is it spoken about or is there stigma?’

“William commented: ‘In the Western world it still hasn’t elevated itself to the highest levels.’

“Mr Roy said that it was spoken about but the charity has been asked to work with the government and ‘spread the word’. He said: ‘On the last census 110 million children were out of school and mental health is a real challenge. We want it to be looked at as a major issue.’

“Kate interjected: ‘And as early as possible.'”

William and Kate joined in with the kids playing a game on a karom board, and Kate sat on the floor to draw with the kids. Kate was asked to draw a picture of her house.

I don’t know about you guys, but to me there is something so charming about Kate sitting on the floor in her long dress drawing with kids seemingly having a good time. It’s this type of thing I want to see more of – Kate getting right in there and enjoying herself while doing so.

Kate wore a new maxi dress from UK brand Glamorous which cost only £35, and new Russell & Bromley “XPRESSO Crossover Flat” shoes in blush pink (£175.00), along with her Accessorize “Filigree Bead Short Drop Earrings” she debuted the other day.

William and Kate also met with a group of Indian women “to hear about a range of issues affecting women and girls in the country.” The meeting was at the personal request of William “who wanted an opportunity to hear directly from women working to support other women and girls. He also wanted to get a sense of work being done to help young women to achieve their full potential and for men to become more supportive of the women and girls in their lives.”

The couple met acid attack survivor Laxmi Agarwal and heard about her campaign ‘Stop Acid Attacks’. She explained her decision to stop covering her face in order to encourage other victims not to hide and also spoke of her successful fight for tougher legal restrictions on the sale of acid. Laxmi is now a TV host, and director of the Chhanve Foundation, a NGO dedicated to help survivors of acid attacks in India.

They also met journalist Soumya Menon who spoke about the role of media in these issues. She explained that the media can help women to tell their own stories and shine a light on the unique circumstances faced by individual women, but also stressed her strong belief in continuing support and empowerment for women who are brave enough to speak up so they are not abandoned and ignored after they have told their stories and the media have moved on.

William and Kate also met with Sunita Jaiswal, a survivor of domestic abuse, who, thanks to the support of the Azad foundation, has turned her life around and has now provided a stable future for her daughters. Through the foundation Sunita was able to train as a driver, giving her independence and an income which allowed her to send her children to school. She and Kate discussed the importance of mothers helping their daughters to develop strategies to become independent women.

“She and Kate discussed the importance of mothers helping their daughters to develop strategies to become independent women.” – BAHAHHAHAHHAHAHAHAHAHAHA Phew, okay, sorry, just one minute… It’s too damn bad Carole Middleton didn’t get this talk 34 years ago, amirite.