Kate Middleton was in Holt, Norfolk today, March 18, to open an East Anglia’s Children’s Hospices charity shop as their Patron. 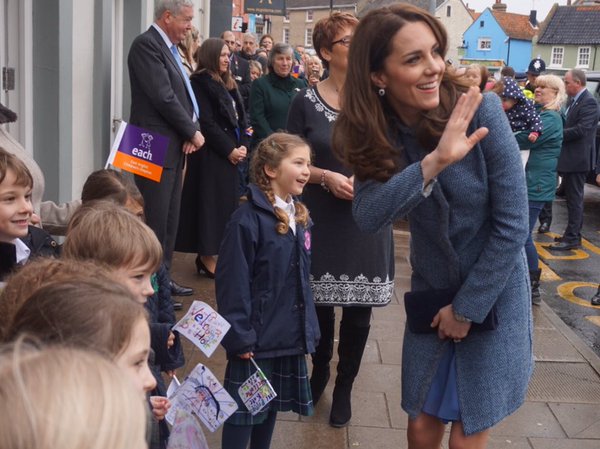 Kate doubled down on her excuse for pulling out of St. Patrick’s Day festivities because she wanted to spend time with her kids instead by mentioning Prince George during her event today.

Apparently George asked Kate to buy him a toy helicopter, but the shop was out of them, so Kate bought a £2 copy of Fireman Sam’s Favourite Tales, saying: “Fireman Sam is George’s favourite.” 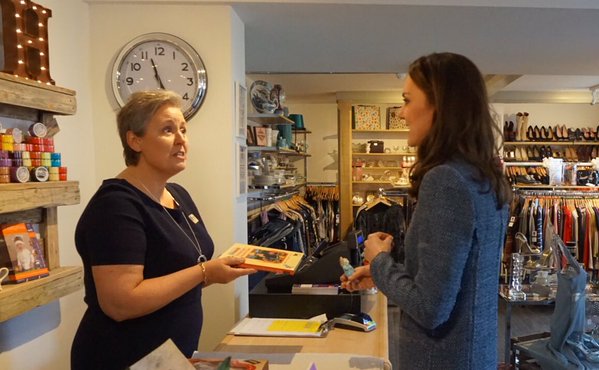 Kate was led on a tour of the shop by 11 year old Rebekah Hughes, who has a rare form of childhood epilepsy called Dravet syndrome.

Rebekah’s mom, Annabel Hughes, said: “I think Kate got off lightly – Rebekah has a way of taking over and she’s lucky she didn’t have her trying on outfits in the changing room. She was brilliant with Rebekah and it was a really special moment.” 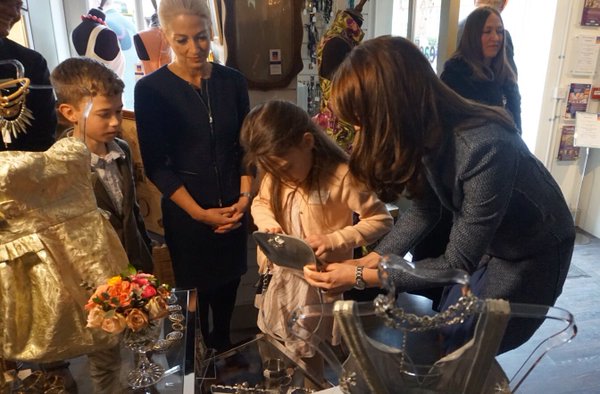 Here’s a video of the interaction.

Kate spent about 45 minutes at the shop meeting staff, volunteers, and families being helped by EACH. During her look around the shop, Kate tried on a £15 blue Boden felt hat which I kind of think would look good on her and I’m bummed she didn’t buy it.

As we know, EACH “supports families and cares for children and young people with life-threatening conditions across Cambridgeshire, Essex, Norfolk and Suffolk. [Their] care and support is tailored for the needs of all family members and delivered where the families wish – in their own home, at hospital, in the community or at one of three hospices in Ipswich, Milton and Quidenham.”

This shop in Holt is their 21st charity shop – all of which play an important role in raising funds for the organization to continue to give help to sick children. 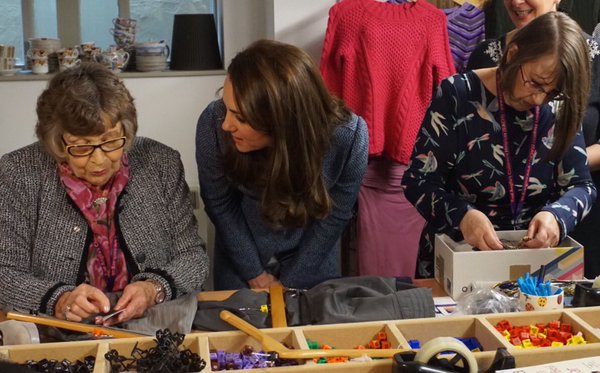 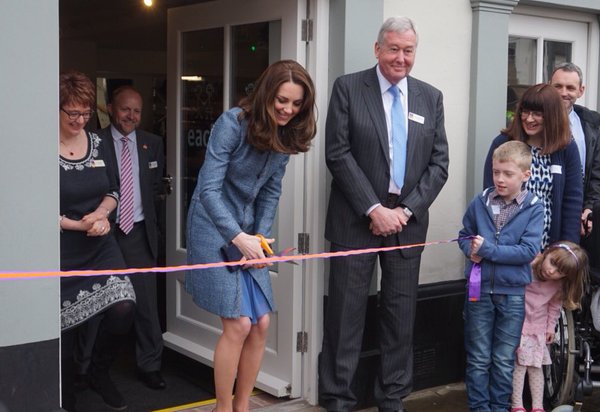 From the Mirror: “A source told The Sun: ‘Until Kate goes on tour to India and Butan in four weeks, she’ll be spending all her time with the kids. Don’t expect to see many public duties from her.'”

I know there are people who wonder why I cover other non-Kate royals here, and it’s because if Kate isn’t going to do stuff, either you get nothing or you get other royals.

If that upsets you, then I don’t know what to tell you except deal with it. If Kate isn’t going to do events, then there’s nothing I can do about that. The only thing I can do is supplement the Kate coverage with coverage of other royals to keep things interesting and to keep having things to talk about.

If you really are annoyed that I cover other royals here, then get mad at Kate and complain that she’s not doing enough and needs to step up so that I have enough from her to cover here. Then I can go make a different site for the other royals. Until Kate works consistently several times a week, there’s nothing I can do except cover other royals.

Kate wore another repeat. This time her M Missoni tweed coat from the AW 2010 Collection which she’s worn three times before: March 2012 to Fortnum and Mason with HM and Camilla; June 2012 to Nottingham also with HM; and March 2014 to a wedding.

Underneath the coat, Kate wore her cornflower blue Zara dress which she first wore right after her wedding in 2011.

Meh. I’ve never liked this coat – I never disliked it, but I never liked it either – and the lack of styling or anything to make it interesting makes the entire outfit just boring.

Here’s a video of Kate arriving. You can here her speaking to the kids who came out to see her.