Prince William, former RAF S&R pilot, and Kate Middleton, Duchess of Cambridge, made the trek (by helicopter, of course) back to Anglesey, Wales yesterday for the RAF Force Disbandment Parade marking the end of RAF opperations. 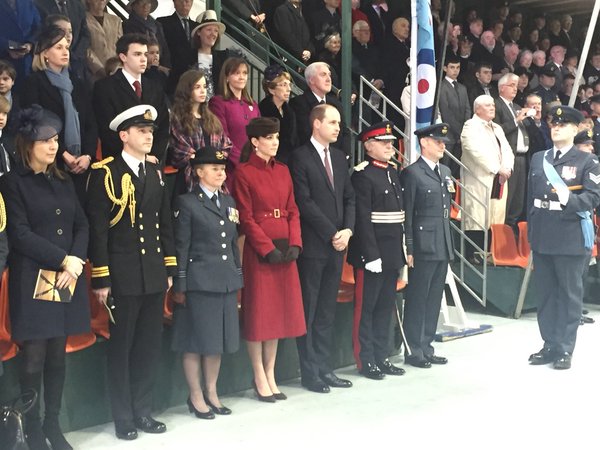 William and Kate arrived for the 11 AM ceremony and watched as the RAF members paraded the colors for the last time. They then attended a reception for staff, crew, and their families.

William’s former colleagues said they used to buy William wedding tea towels with his and Kate’s faces on them as a joke.

One of William’s former colleagues gave him a glowing review:

“He was not only up to doing it but he did more than that. When he was serving with us he was a very good pilot. … He would come on shift and do all the duties associated with going on shift. He would live and work with his crew, go on rescues with his crew, eat with his crew. He was just another one of the guys. He is one of the family and we wanted as many of the family to come back today and say goodbye.”

I wonder what William’s EAAA colleagues will say about him when he’s left that job.

On living in Anglesey, Kate said: “It was such a special time for us. It was the start of our life together really.”

As I predicted, Kate wore red – though I was wrong on the rest of my prediction. Kate’s LK Bennett red “Ami” coat made a fourth appearance. She’s previously worn the coat in Denmark in November 2011, to a Wales rugby match in November 2012, and for a poppy event in November 2013. The November streak is over. Sad Face.

Kate switched up her styling of the coat, though, which is good. For this event, Kate wore her hair in a ponytail, brown pumps, and brought back one of her fave hats: the Betty Boop from Lock & Company. Kate also wore her Mappin and Webb Empress earrings.

There were very few reporters and photographers at this engagement – Chris Jackson wasn’t even there (he was with Charles and Camilla).

Our old friend Richard Palmer made some comments about the lack of photographers:

“Kensington Palace’s growing attempt to restrict media to a tiny number means most of the royal press pack won’t be with Will and Kate today.”

“Apparently there’s no room for most royal media to view the parade in a hangar at RAF Valley today, where Will and Kate will meet old chums.”

“It reminds me of Clarence House saying space was tight when Charles and Camilla went to the Badshahi Mosque in Lahore, Pakistan, in 2006.”

“CH relented when @ArthurJEdwards said he’d been there with Diana and there was lots of space. The mosque holds 55,000 worshippers.”

“A colleague who was there with us when the Queen visited Prince William at RAF Valley reminds me there were about 50 media in the hangar.”

For reference, here’s the size of the hangar. The back and forth between Team Cambridge and the press is getting very interesting.

Here’s a video of the engagement.