Kate Middleton celebrates the 75th anniversary of the Air Cadets

Happy Sunday (or Monday – sup New Zealand)! Kate finally made an official appearance that wasn’t a church/memorial service the Queen dragged her to – yay!? It’s been a week shy of two months since Kate worked last, on December 16, and for her first official appearance of 2016 she can already check off one of her patronages as visited – also yay!? The Duchess of Cambridge, Kate Middleton, paid a visit to the RAF Air Cadets in her new, official role as Honorary Air Commandant today, February 7. Kate marked the 75th anniversary year if the Air Cadets with a church service at St. Clement Danes and a reception at the Royal Courts of Justice. 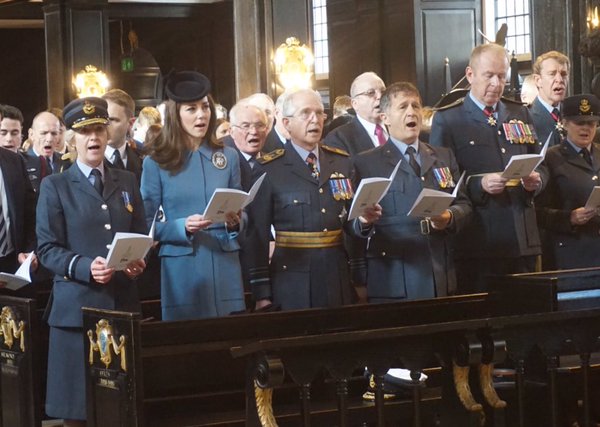 The Air Cadets is made up of two organizations: Air Training Corps (ATC) and Combined Cadet Force (CCF). The Air Cadets promotes a practical interest in aviation and encourages the development of qualities of leadership and good citizenship. They have more than 40,000 members ages 12-20. Since the Air Cadets was established in 1941, there has not been a female Honorary Air Commandant until Kate was made one in 2015. 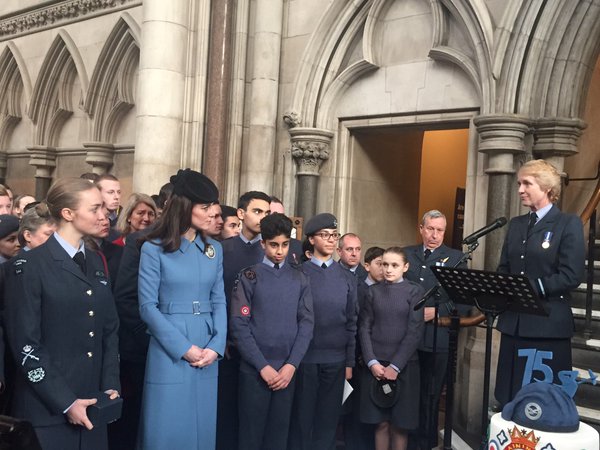 Kate spent two hours total (one hour for service and one hour for reception) attending the church service and later the reception where she heard a speech from Air Commodore Dawn McCafferty before cutting a cake with the youngest member of the Air Cadets. 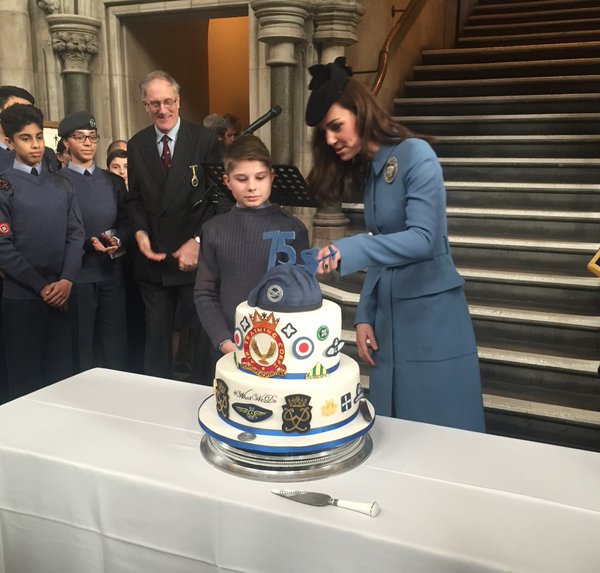 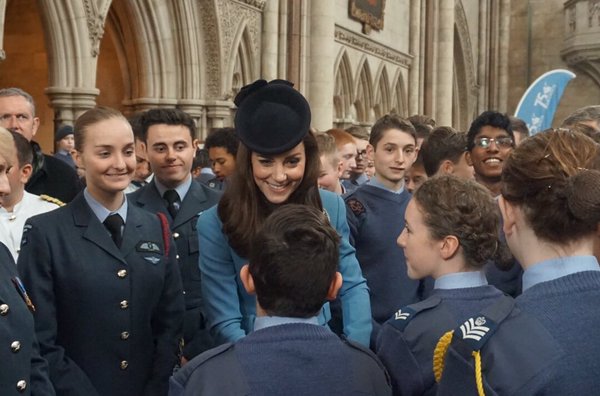 Kate wrote a message for the service’s program:

Having recently assumed the role of Honorary Air Commandant of the Air Cadets upon the retirement of HRH The Duke of Edinburgh as Honorary Air Commodore-in-Chief, I would like to thank all members of the Organisation for inviting me to lend my support to your work.

I am delighted to be able to continue my link to the Royal Air Force family through this new affiliation and I believe that the Air Cadets bring genuine benefit to our young people and indeed wider society. The Cadets offer countless opportunities to develop leadership, teamwork skills and community spirit as well as self-confidence borne of testing boundaries in a safe but exciting environment. These activities are supported by an incredibly dedicates team of adult volunteers and staff who are integral to the success of the Cadets.

I feel very proud to be involved in supporting present and future generations of Air Cadets and I know they will go on to achieve their full potential, just as thousands have done before them.

I hate that I don’t actually believe Kate wrote this. It seems too formal for Kate. 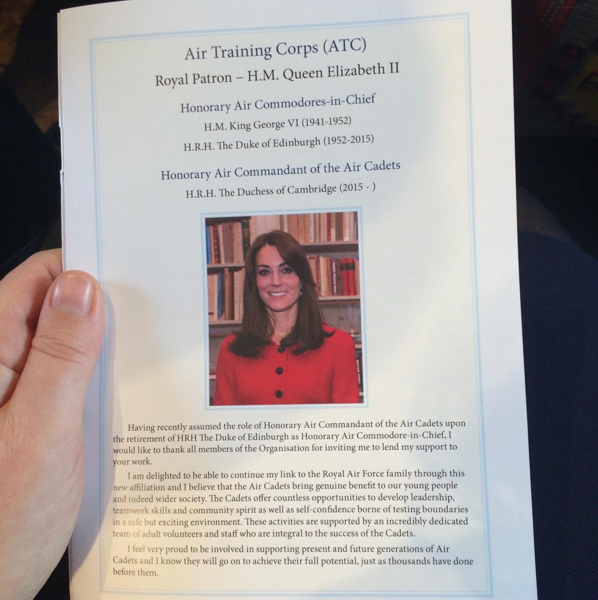 Kate spoke about Prince George and claimed he loves airplanes and wants to join the Air Cadets. From the Express:

[Kate] told cadet Lucinda Conder, 19, that she had shown George, who is two and a half, pictures of Spitfires after a royal engagement.

“He is now obsessed with the air cadets and wants to join,” said Ms Conder, a medical student from Hammersmith in west London, who was the top female cadet of 2015. “We are going to have to push that one when he gets to age 12.”

Kate repeated a blue bespoke Alexander McQueen coat she first wore in New Zealand to the Blenheim War Memorial in April 2014 and repeated to the 70th anniversary of D-Day commemorations in June 2014.

The more I see this coat, the more I dislike it. The first time Kate wore it in New Zealand I liked this coat but the second time Kate wore it I started to dislike it, now with a third wearing I really dislike this coat. I think the coat swamps Kate’s slender body and the oversized pockets do not help and don’t look good. Also, I noticed that there is darting going up to the breasts which I think looks odd. So this coat is not a win for me. 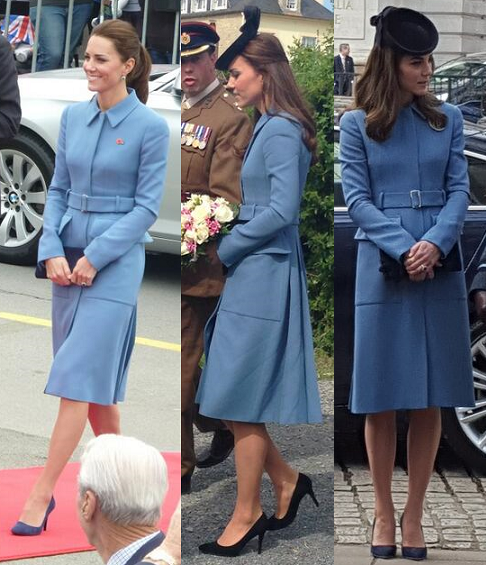 Kate wore a hat by Lock & Company which we previously only got a glimpse of in a fan photo when Kate attended a memorial service at Bath Abbey in March 2015. It’s another one of those flying saucer hats. But of Kate’s collection of flying saucer hats, this is probably the least flying saucer-y of them, so there’s that.

Kate wore her aquamarine and diamond earrings she’s worn since 2012.

Kate got to wear a Dacre Brooch. I must say, I really like it when Kate wears a brooch because it makes even a boring, thrice-repeated coat more interesting. All my attention was on the brooch. Kate wore her hair down, of course, which was not the best choice for showing off the brooch, but Kate moved her hair enough that we got to see the brooch. I really wish Kate would wear more brooches. 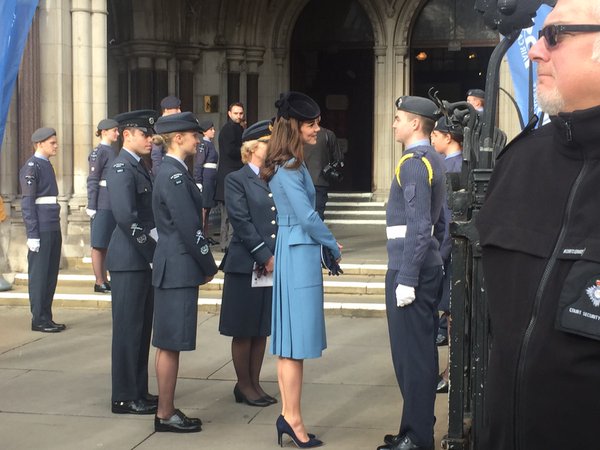 In other news, the Sunday Express is reporting that William and Kate will visit the Taj Mahal when they are in India. They’re also saying the tour will take place April 10-17.

Although the schedule for their India tour is yet to be finalised, local media has reported that the breathtaking white marble mausoleum in Agra is on William and Kate’s agenda. Diana was famously photographed sitting on a bench in front of the famous landmark in 1992, nine months before she and Prince Charles announced their separation. […]

While a royal aide stressed it was “far too early to speculate on the programme”, Indian news outlets reported yesterday that an advance team from the British High Commission had met with Agra officials on Thursday to review the security system and other arrangements for the royal couple. […]

It has been reported the royal couple will be in the country between April 10 and 17. William, 33, and Kate, 34, have never visited India and it is highly likely they would want to take in the country’s top tourist attraction.

I really don’t care if William and Kate visit the Taj Mahal, I would expect them to, I think it would be odd if they didn’t visit since it is one of the most well known parts of India. Like, I would also expect a photo of them with people wearing Saris, visiting Bollywood, and with elephants. I don’t want to stereotype or anything, but those are the things I think of when I think of India. And curry and naan (which is delicious). 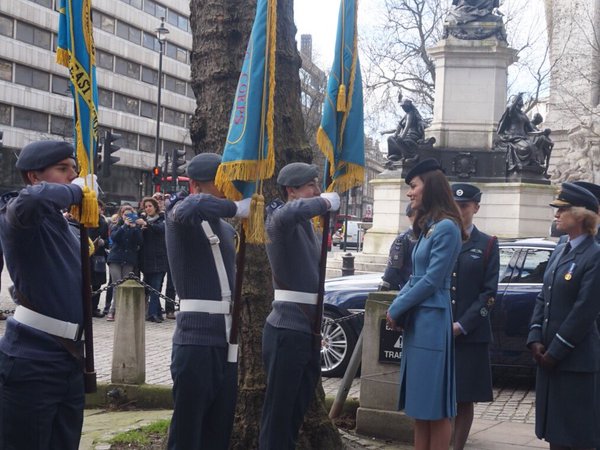 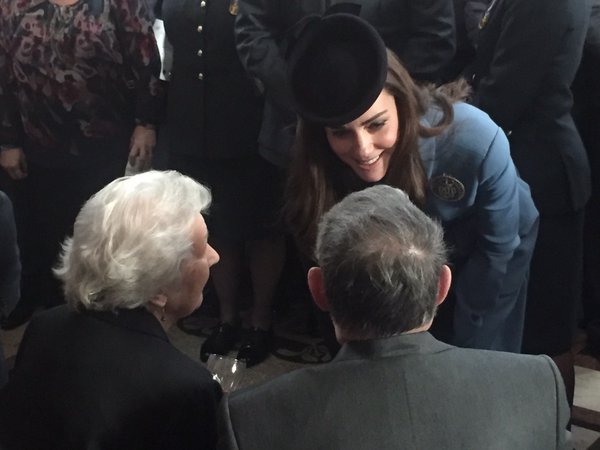