I was hoping I would be able to add some Kate or Harry news to this article but there isn’t any, so here are the poll results for our 2016 prediction polls.

I made the mistake last year of not writing down what I voted for so at the end of the year I had no idea whether I was right or not. This year I’m going to write down my picks. 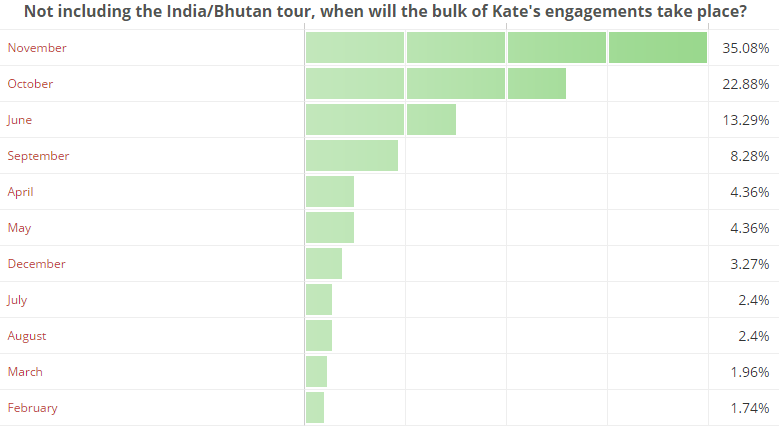 58.49% of us voted that Kate will only visit 3-5 of her patronages this year. Yeah… I won’t say too much because I have a full article on Kate’s patronages visits coming tomorrow, but the results of this poll are really interesting to me after having done that article. I’ll talk more about that tomorrow.

I voted that Kate will take on several new patronages this year. I think she’ll do at least two (I’m predicting the Anna Freud Centre and possibly the Fostering Network; so we’ll see about that). Only 14.5% of you guys thought the same way I did about this one. 46.32% said Kate will only take on one new patronage and 39.18% said she won’t take on any new ones.

My choice for this poll was more wishful thinking than anything, really. I want Kate to make at least one good speech, so I voted that Kate will make one speech and that she’ll be good.

I would love for Kate to make a solo overseas visit. She was going to make one to Malta in September 2014, but she cancelled due to pregnancy. So my head is saying she won’t make one this year either. The vast majority of you (90.54%) agreed with me.

I didn’t originally have the “Yes, one but I’m not sure which” option for this poll, but I’m glad I put it in there because I and 52.84% of you guys chose that one.

Yeah, I don’t think William and Kate will attend the State Opening of Parliament. 88.34% of you don’t either.

Not only do I think Kate will wear the Cambridge Lovers Knot Tiara again this year, I’m hoping she does and it’s to an event where we get a full face photo of her wearing it. I really want to see what Kate looks like in it.

I know a lot of people disliked Kate wearing this tiara because of the Diana connection, but 65.78% of you think she’ll wear it again this year.

I and 76.43% of you don’t think Kate will wear another new-to-her tiara this year. Kate already has three that she’s worn, she can’t have all the tiaras. Save something for Harry’s wife.

Kate sure loves her blue. The results of this poll were fairly close but Kate wearing blue 31-40% of the time won with 28.05% of the vote (which is the one I voted for, too).

The top two vote getters for this poll were very close. Alexander McQueen won by a hair with 41.36% of the vote; and Jenny Packham came in second with 41.12% of the vote. I voted for McQueen. Kate loves McQueen.

I really hope Kate branches out with her shoes this year, but I and 23.8% of you voted that she’ll wear the Power Pumps 21-30% of the time.

I and 42.18% of you think Kate will only have one tiny wind incident this year instead of a full flashing or even a partial flashing. There was no full flashing last year – we didn’t see her bum like we did the previous years – but some of you consider the upper thigh we saw when she wore the Ralph Lauren dress counted as a flashing.

Some of you have faith that the Queen of the Crotch Clutch will finally stop clutching her crotch, but I and 36.93% of you think she’ll clutch her crotch 100% of the time.

If we only see George 3 times (officially) in 2016, it will be the least amount of times we’ve officially seen him in one year since the year he was born. Hopefully we’ll see him more than that. 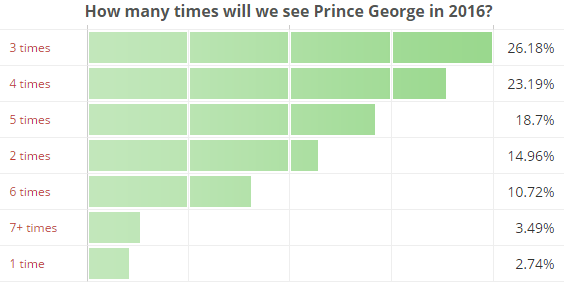 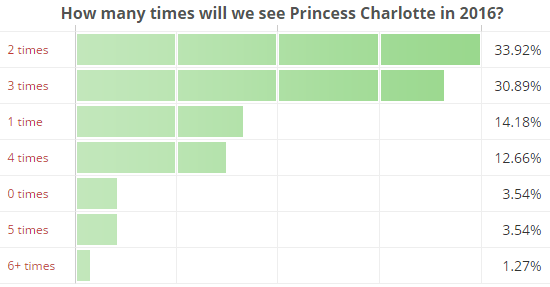 Watch Kate announce a pregnancy next month now that I’ve said that.

I know several of you guys said you didn’t like this question because you didn’t want to speculate on Kate’s health, especially with a condition that can be very severe, but I asked it so I’m going to go ahead and post the results. I and 61.19% of you said Kate would have HG with a third pregnancy because “anything to get out of royal duties”.

47.12% of you guys think Harry will not have an official girlfriend in 2016. I was surprised that only 14.79% think you would dislike his girlfriend if he got one, whereas 38.08% think she would be someone you like. I voted that if he got a girlfriend she would be someone I dislike, because I didn’t like Chelsy or Cressida. I want Harry to date/marry a woman who is everything we want Kate to be (and that she isn’t currently), but given his preferences and the circles he runs in I just don’t think that’s going to happen.

The vast majority (95.14%) think Harry will not announce an engagement in 2016. I am in that majority. I think even if he did get a girlfriend this year getting engaged this year would be too soon.

This one was not so close at all. I and 87.69% of you don’t think Eugenie will announce an engagement this year.

This one was closer that Eugenie but not as close as Beatrice. I and 58.06% of you think The Pips will not announce an engagement this year, though 34.95% of you think she will.

To spice things up just a tad, here are some photos of Prince Harry visiting Mildmay Hospital, a dedicated HIV hospital, on December 14, 2015 that I never posted.