This is part 2 of our polls on Kate Middleton‘s 2015 fashion: coats, gowns, and hats (go here for part 1). Several of you mentioned the dresses/separates not having anything that stood out, but I think this group has higher highs and lower lows than the dresses/separates categories. Both my favorite looks and least favorite looks of the year come from these categories. As with yesterday’s, the categories are organized by color with two polls at the bottom of each category.

2) Mulberry Cerise Wool Silk Double Crepe Coat – Kate caused a slight ruckus when she debuted this coat while visiting the September 11 Memorial in NYC in December 2014, but her repeat on March 27 for three visits in South London made much more sense.

3) Sportmax green long belted coat – Kate added another green coat to her green coat collection when she debuted this coat at the Christmas church service on December 25.

5) Sportmax “Gerbera” coat – Kate continued her love of blue, debuting this one on February 18 at the Emma Bridgewater factory and Action for Children.

6) Beulah London Chiara Wool Navy Trapeze Overcoat – Kate wore this coat twice in one month, debuting it on March 13 at the Service of Commemoration and repeating it on March 26 at a memorial at Bath Abbey.

8) Reiss “Emile Sharply Tailored Coat” – I’m running out of things to say about Kate’s blue coat additions. Kate added this one to her ever growing blue coat collection on September 18 at the Rugby World Cup opening.

9) Christopher Kane bespoke blue coat – Another blue coat. This one debuted on October 23 for Kate’s trip to Scotland with Prince William.

10) Max Mara Studio Villar double-breasted wool coat – Kate debuted this white coat during her February 12th visit to Portsmouth where she painted butts on a mural.

12) Alexander McQueen bespoke white coatdress – Kate went to her go-to designer for big events, Alexander McQueen, for her coat for Princess Charlotte’s Christening on July 5. After months of constricting necklines, it was nice to see Kate wear something a bit more open.

15) “Private dressmaker” black coat – This black coat dates from 2012 and is not a maternity coat, but Kate wore it paired with a maternity dress on March 18 for her Home-Start visit.

16) Alexander McQueen bespoke double-breasted black coat with velvet patchwork – Kate was feeling the velvet, but only patches of it, on November 8 for Remembrance Sunday.

17) Hobbs Dalmatian Print Mac coat – Kate repeated another coat she wore while pregnant with Prince George on March 11 when she visited Turner Contemporary and Resort Studios.

18) Reiss “Rubik Houndstooth Wrap Coat” – In another example of Kate debuting a coat and repeating it in the same month, Kate debuted this houndstooth coat on December 10 during her Action on Addiction center visit before wearing it a second time while out shopping on December 11.

2) Erdem “Alouette” printed gown – Kate stepped far outside of her comfort zone when she debuted this floral gown at the 100 Women in Hedge Funds gala on October 27.

3) Jenny Packham bespoke duck egg gown – The day before rocking the 70s flair, Kate dared to go braless in this sheer gown to the Spectre premiere on October 26.

**Kate wore a navy hat to a memorial at Bath Abbey on March 26 but since we only got a fan photo from the side and can barely see it, I’m not including it in the poll.

1) Jane Taylor pink hat – Kate debuted a new pink hat to go with her repeated pink coat for the Commonwealth Service on March 9.

2) Lock & Company green flower hat – It looks like a flying saucer is trying to mate with a poinsettia in this green hat Kate wore on December 25 for Christmas church service.

3) Jane Taylor navy hat with bow – This hat may be the least “flying saucer” of the flying saucer hats but it’s the one that tried to fly away the most. Kate had to hold on to it to keep it from flying off her head in the wind when she wore it on March 13 to the Service of Commemoration.

4) Sylvia Fletcher for Lock & Company “Fairy Tale” hat with flower detail – This must be Kate’s favorite hat since she’s worn it six times since it’s debut in 2012. Number six on the list came on December 27 when she wore it to Sunday after Christmas church service.

5) Lock & Company “Marisabel” white hat – Kate stuck a diaphragm on her head for Trooping the Color on June 13. 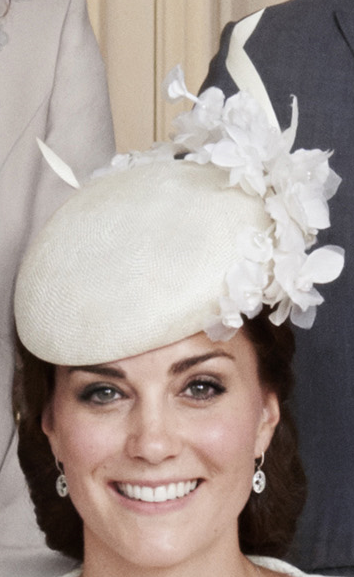