Please go check out my article about Camilla’s lunch with the Helen & Douglas House kids – it’s become one of my favorite events to cover and I’ve already bumped the article once and I don’t want it to get lost in the “new Cambridge family photo” hullabaloo. Thanks.

Anyway, much to my annoyance (why can’t Camilla have a day?), Prince William and Kate Middleton, Duchess of Cambridge, have released a new photo of them as a family of four with their kids, Prince George and Princess Charlotte.

The Kensington Palace social media accounts posted the photo this morning with the caption:

“A new family photo – Merry Christmas from The Duke and Duchess of Cambridge, Prince George and Princess Charlotte.

“The Duke and Duchess are hugely appreciative of all the warm messages they have received about their family this year and are very much looking forward to their first Christmas as a family of four.”

KP also announced this morning that Prince George will be starting nursery school in January:

“Prince George will begin to attend the Westacre Montessori School Nursery in Norfolk before the end of January.

“‘We are looking forward to welcoming George to our nursery where he will get the same special experience as all of our children.'”

Nursery school in Norfolk, because they are spending all their time in Norfolk… I guess that “£4.5 million in public money”-renovated KP apartment was totally worth it, right?

Speaking of Norfolk, this Christmas photo was taken in late October in the garden of their Norfolk home, Anmer Hall. If Charlotte’s outfit looks familiar to you, it’s because she wore the same outfit in her Kate-taken photos from November. So either these photos were taken on the same day or Charlotte repeated her outfit. The Kate-taken ones were said to have been taken in early November.

EDIT: My bad, this photo was taken in late October in the garden of Kensington Palace. So it could not have been taken the same day as the previously released Charlotte photos, since those were taken at Anmer Hall. 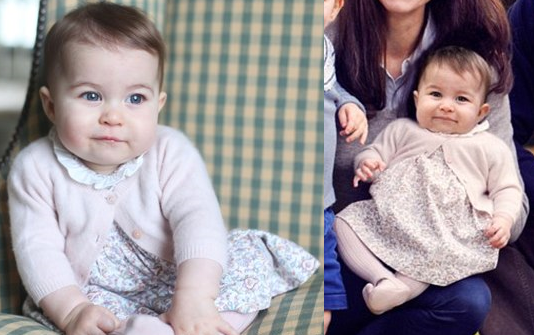 [The Duchess of Cambridge / @KensingtonRoyal/Chris Jeff]

I don’t have much to say about the photo other than it’s probably one of the best professional photographer-taken photos they’ve released – it has color and movement and actual life to it. They look like your average family of four taking a photo.

I know I shouldn’t be annoyed because they are releasing photos of their kids which is something we’ve been asking for, but… I can’t help it. So I don’t have much to say right now, other than enjoy this photo because it’s probably the last we’ll see for a while.

Oh! I thought of something to say, this “Christmas photo” isn’t very Christmas-y. It was taken outdoors in the fall, so it looks like a fall photo. If they were going to do a “Christmas photo”, they should have taken one indoors by their Christmas decorations, like the Swedes.

Speaking of the Swedes, they released new photos of the Crown Princess family which I will cover tomorrow – unless the Cambridges decide to take yet another day.