Kate Middleton, Duchess of Cambridge, and Prince William traveled to North Wales yesterday, November 20. As has been their MO this fall, they spent a good chunk of the time focusing on the mental health of young people. But the most interesting part to me was their banter while they were abseiling/rock climbing.

William and Kate visited the Towers Residential Outdoor Education Centre in Snowdonia in North Wales, run by Mountain Rescue England and Wales (which William has been Patron of since 2007). Part of their visit included an abseiling and rock climbing exercise. William went down first – with Kate holding the rope – then Kate went down. While William was descending, the two joked around with each other, with Kate saying: “William, how much do you love me?”; and “I quite enjoy this, actually. For once I’m in control.” At 0:07 and 0:24-0:28 in the below video.

I love the “For once I’m in control” line. Should we parse? It may simply be playful banter, but even playful banter comes from somewhere and that line could be an interesting look at their relationship dynamic. No matter what the KP PR team tries to tell us (or William for that matter), I do think William is the dominant person in that relationship and that for the most part they do what William wants. I mean, he even undid her harness at the end of the video seemingly without her asking for help.

Whether it is a nothing more than playful banter or an indication that Kate rarely has control in their relationship, I do think it’s a fun moment between the two and shows some sort of personality that we rarely see from them. The entire video shows more personality from them than we usually see. This kind of banter is what they need to do more of to show us that they are real people rather than empty caricatures and clothes horses.

Earlier in the day, William and Kate made their first stop at Castle Square, Caernarfon where they did a walkabout. Here is a picture of the crowds in the square. It’s interesting to see an areal view. The crows look much bigger when they are photographed from the POV of the Cambs. The crowds look much smaller in the areal view.

During the walkabout, Kate said she wanted to get Prince George in scouting and that she needs to put Princess Charlotte down for Rainbows (part of the Girl Guides, I think. I’m not sure how scouting works in the UK). Kate is a volunteer with The Scout Association but hasn’t done anything with them since December 2014.

The couple then moved to a GISDA centre in Caernarfon where they met with young people. GISDA provides intensive support and offers opportunities to vulnerable young people between 14 and 25 years old in North Wales. 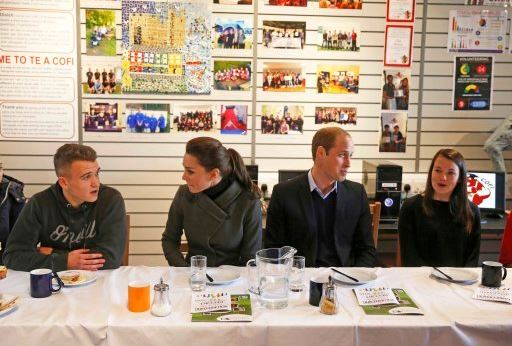 While still in Caernarfon, William and Kate visited a photography exhibit titled: “Mute: are you being heard?” which was put in by Ynys Môn and Gwynedd’s local Mind charity.

Here is an interesting story about a man they met at the Mind event, from the Daily Mail:

“James Cheffings, 19, from Bangor, had just joined the group and didn’t have a photograph to show he couple, but he did attract some attention from them because he had his leg in a cast.

“He said: ‘They were asking about how I ruined my knee cap. I was dancing in the pub and I dislocated my knee. Kate said it sounded like something William would do, so I was like ‘ah, something in common’.’

“He said: ‘I accepted that I was a gay man and now I work in an attitude free gay bar and am a drag queen on weekends.’ He said about William and Kate: ‘It came across that they were really accepting and understanding about the whole LGBT community which was really nice to see that we in that community have got that support from the royal family.”

So… William dances around drunk, and he and Kate are cool with the LGB community. 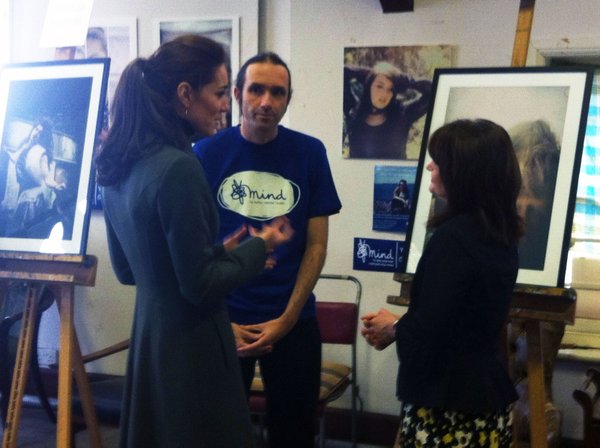 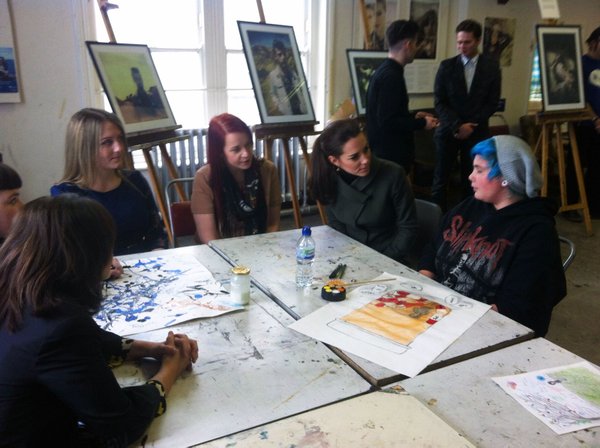 It was after the Mind visit that William and Kate traveled to Snowdonia for the Mountain Rescue visit. Before their abseiling adventure, William and Kate met with young people from the area.

Kate told one of the volunteers: “I love it here. I really miss being here, being outside and in the mountains.” Didn’t Kate spend most of her time with her mom in Berkshire or in London when she was supposed to be living in Wales? Eh, whatever. Kate also talked about George, saying he loves helicopters. More form the DM: “Catherine then said how much George loved [helicopters]. He knows all the different colours and asks her about all the parts. She laughed and said she tells George to ask Daddy as she has no idea.” 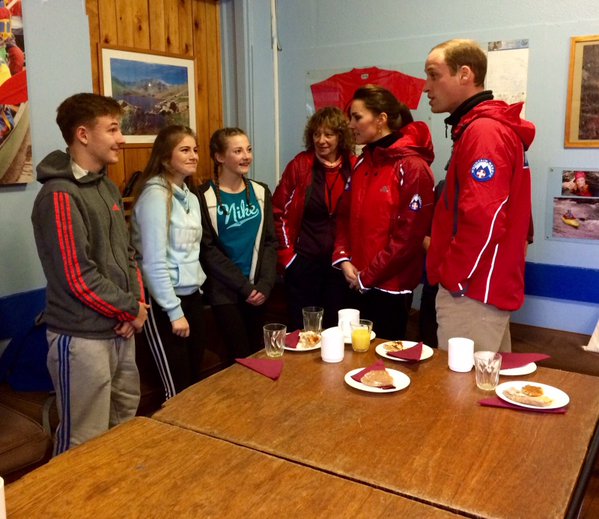 The next, and last, stop for the Cambs was in Denbigh where they visited another Mind charity project. This time the Vale of Clwyd Mind Men’s Shed project.

While at the Men’s Shed project, Kate talked about George and Charlotte some more.

“Asked about her plans for Christmas during a visit to a men’s mental health support group, Kate replied: ‘I haven’t started yet, but George will be starting to talk about Christmas soon.’

“Asked about her two-year-old son and six-month-old daughter, she added: ‘They are doing really well, thanks. Charlotte is getting bigger and getting on well with her noisy big brother.'”

Charlotte’s getting bigger, huh? I wouldn’t know. I only remember seeing her like this:

Underneath her coat, Kate wore a black turtleneck and black skinny jeans. She wore her fav Aquatalia “Rhumba” boots and brought back her Kiki McDonough “Citrine Pear Drop Earrings” that we haven’t seen since St. Patrick’s Day.

For the abseiling, Kate took off her Reiss coat and put on a Mountain Rescue windbreaker, and changed her shoes to her Brasher Hillmaster Boots she wore in 2012.

Kate wore her hair in a ponytail and her bangs pinned back. This is much better than her crazy hair moment from Wednesday.

This is the third time Kate has worn this Reiss coat publicly. The first time she wore it was to the morning service on Christmas in 2011. She wore it again to the launch of The National Football Centre at St George’s Park in October 2012. Kate wore the same boots three times with this coat, but she did change up some of the styling. Her hair is different and she ditched the ugly belt this time.

William and Kate may have pacified the royal reporters with their George and Charlotte meet-and-greet, but it seems the royal duo continue to piss off the royal photographers. 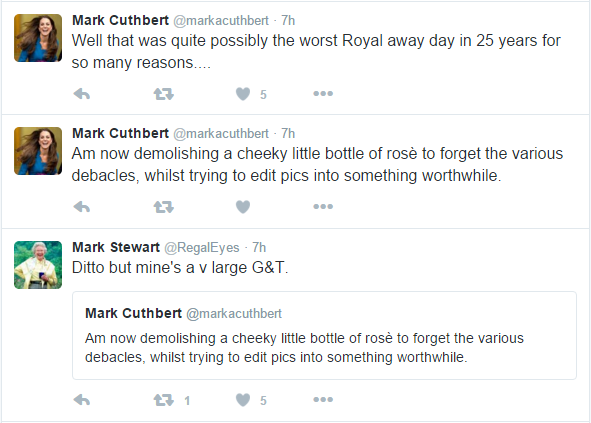 Here is another video from the visit.