As I hoped, and as Jason previewed, Kate Middleton, Duchess of Cambridge, gave a speech at the Place2Be Headteacher Conference today, November 18. An actual speech talking about the actual issue.

This is definitely the longest speech Kate has ever given, going by the length of the transcript. I’m not quoting the entire thing because it’s too long (I never thought I would write that in relation to Kate), but here are a couple excerpts.

Kate on why she chose mental health:

“I often get asked why I decided to spend time highlighting the mental health of children. I imagine my answer might be similar to many of yours. I know that I was lucky. My parents and teachers provided me with a wonderful and secure childhood where I always knew I was loved, valued and listened to. But of course many children are not so lucky. Since beginning my work in areas like addiction, for example, I have seen time and time again that the roots of poor mental health in adulthood are almost always present in unresolved childhood challenges.”

On why Place2Be’s work is important:

“Not all children have the anchor of a strong family. Many will arrive through your school gates feeling a real lack of love and devotion in their lives. This often leaves them feeling insecure and without confidence and trust in the world around them. That is why your work is so important.

“Parents, teachers and other school staff need the tools to help these young people early in their lives. And the earlier, the better. It is proven that early action prevents problems later in life. […] As head teachers you have the chance to reach tens of thousands of children during your careers, and make an impact on a great scale.”

UPDATE: Here is a video of her speech:

Before I start nitpicking, I want to say: good job, Kate. Good on you for actually making a speech that lasted more than one minute, and that was specific to the cause, the charity, and the event. Honestly, good job for getting up there and making that speech. And I do qualify this as a speech. Yesterday’s words were not a speech, but this is a speech.

Now for nitpicking: From this ITV video of parts of Kate’s speech, I can tell that holy mother of frogs Kate needs to get rid of those bangs! Or at least pin them up when giving a speech. Because of the constant head bobbing the bangs kept getting in her face which was highly annoying and a huge distraction. From that video and this one from Rebecca English, I can tell that Kate still has a problem with random pauses at in… appropriate times in her sentences and she tripped over her words a few times. So basically all the things we’ve been saying Kate needs to work on in terms of delivery, she still needs to work on.

Overall, though, I say this was a good effort from Kate.

Here’s another nitpicking thing I want to bring up, though. This bothered me personally, but I don’t know if others were bothered by this. I find Kate’s answer to why she chose children’s mental health interesting because basically she’s saying she chose children’s mental health because she had a great childhood, which doesn’t make a ton of sense to me. The last sentence in the part I quoted – about adult issues stemming from unresolved childhood issues – I liked. But the set up seemed off to me for some reason. Maybe because she’s highlighting the stark difference in her childhood compared to a child who actually suffers (or suffered) from mental health issues and is therefore othering herself from children who suffer (and adults who suffered as children and/or continue to suffer)? She’s not actually relating herself to the cause here. Just going off of what she has said here, it seems she has no idea what it’s like to deal with mental health issues. I think it’s the othering that’s throwing me off.

I don’t want to get to personal in terms of my nitpicking, though, because I do love having something to actually write about other than “she met people” and what she wore, and I would like her to keep up the speech-giving and to improve on the delivery issues she needs to improve on.

Having said that, let’s do fashion.

After months of new dresses, coats, and gowns, Kate finally wore a repeat. She brought back a Matthew Williamson dress from 2012. The dress is from the pre-fall 2012 collection and is a grey color with turquoise and gold embellishment around the collar and sleeves, and a peplum that was all the rage back in 2012. Kate accessorized the dress with her Emmy Shoes “Valerie” pumps and “Natasha” clutch in carbon. Kate has these same pumps and clutch in chocolate as well. Kate also wore her Kiki McDonough “Lauren Yellow Gold Pave Diamond Leaf Earrings” (£2,200.00) she debuted last month.

Kate previously wore this dress to the ‘African Cats’ premiere in April 2012. Kate styled this dress almost the exact same way she did back in 2012 – minus the tan and with the addition of the Cartier watch. Oh, and a different shade of brown hair.

Kate met with schoolchildren outside ahead of the conference. 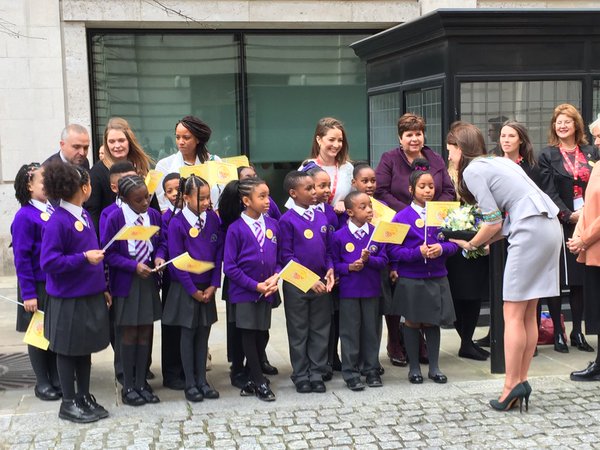 Here are two quotes from the Place2Be Twitter page that I liked and related to.

More photos. It was quite windy so thank goodness Kate went with a straight skirt instead of a flared one.