Here’s a Royal Round Up of Prince Harry at more rugby matches, Sophie, Countess of Wessex at Ascot Racecourse, Queen Maxima out and about, Queen Mathilde welcoming a foreign president, Prince William penning an article pleading for wildlife conservation, and Carole Middleton drinking at rugby.

BTW, SVT originally claimed they would not broadcast Prince Nicolas‘ baptism on Sunday, October 11, but they changed their minds because people complained and they will now broadcast the baptism on BBC1 and SVT Play starting at 11:50.

Harry was very disappointed after England’s loss and drowned his sorrows in alcohol. Harry joined Guy Pelly and Princess Eugenie at Ramusake in Kensington on Saturday night.

They were joined by Antonia Packard (one of Eugenie’s friends), who according to the Daily Mail Harry was reported to be dating before his summer visit to Africa. Do you guys remember that one? Because I don’t. All I remember is they were trying to push the Jenna Coleman thing, and the Cressida thing, and the Chelsey thing. I don’t remember any mention of an Antonia Packard.

Before the match on October 1, Harry visited the England team to watch their training session at Pennyhill Park in Bagshot, England. Do you think Harry was bad luck for the England team?

Prince Edward, Earl of Wessex and Sophie, Countess of Wessex attended the Autumn Racing & CAMRA Beer Festival meet at Ascot Racecourse on October 2. Sophie looks really great here, right? I like the cream dress and jacket, and the earrings go perfectly with it.

King Willem-Alexander and Queen Maxima met with the Dutch members of the European Parliament in Noordeinde Palace in The Hague on October 2 (above).

On October 1, Max and W-A attended the symposium ‘China in The Netherlands’ at the University in Leiden. This symposium is in preparation for their State Visit to China during the last week of October.

King Philippe and Queen Mathilde welcomed Turkey’s President Recep Tayyip Erdogan and his wife First Lady Emine Erdogan to the Royal Palace in Brussels today, October 5. Erdogan is in Belgium to meet with EU leaders about the migrant crisis and the Syrian war.

William also wrote an article for the Financial Times about the illegal wildlife trade and why people should care. William started his article by saying: “I cannot imagine what it would feel like if the last elephant or rhinoceros in the wild died — and I then had to explain to my children how we let it happen.”

I don’t want to be an a-hole and I understand the severity of the crisis, but, um… the same way you will explain all the other extinct species to them?

William then said: “If we do not tackle [illegal wildlife trade] in a concerted way, the result will not just be the extinction of some of the world’s iconic animals. If we let these animals vanish on our watch, the impact on our collective confidence to tackle any other global issue will be devastating.”

One more a-hole-y thing… do you think William actually wrote this article himself?

Michael, Carole, and James Middleton were also at the England v Australia rugby match on Saturday. They sat right in front of Prince Harry.

I guess there was a slight to-do over the fact that Carole pulled out a tiny bottle of wine from her bag and drank it. She was also seen pulling chips/crisps from her bag and eating those. I wonder if she bought her snacks at the stadium or if she snuck them in illegally. I don’t know about in England but in America venues don’t like you to bring your own snacks.

Harry even greeted the Middletons.

James was there, too. I won’t subject you to a photo of him without a little Harry in the background to make up for all the Middleton photos.

Oh, by the way, Carole made the front page of the Daily Mail. For real. 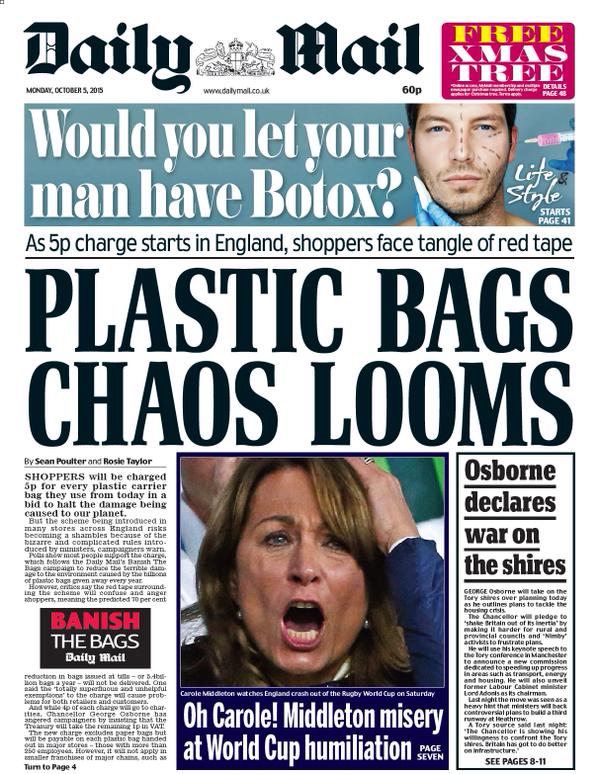