It’s the second day in a row of double engagements for our dear Duchess of Cambridge, Kate Middleton. And it’s the fifth day of engagements in the last eight days. Phew. Kate must be exhausted. Earlier today, October 27, Kate visited Chance UK at Islington Town Hall in Islington, North London. And what did Kate wear to visit kids? Dark grey, of course. 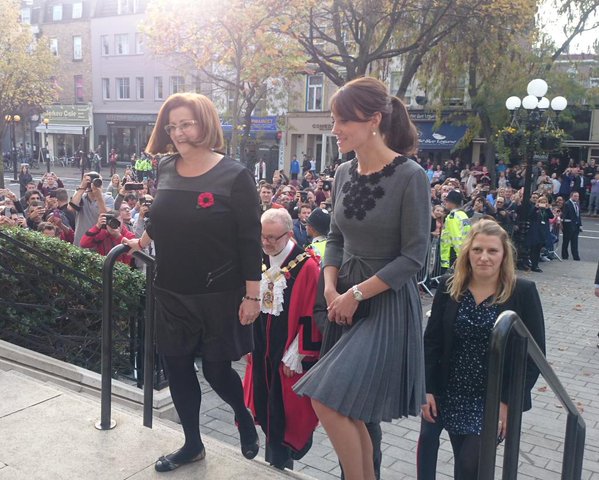 During her visit to Chance UK, Kate met with children age 5-11, their parents, and their mentors. They told her about their experiences with the organization and Kate told them stories about Prince George.

As we saw yesterday, a photo of Kate and George at the Natural History Museum surfaced. When Kate sat down with Carl Goddard, 10, and his mentor Claire Butler, 29, Kate talked about the NHM trip after Carl showed her a picture of him at the museum. Apparently it happened last Thursday, October 22. So not the day of the rugby match like I mused. Kate simply rewore those ugly floral Zara pants.

“[Carl] said: ‘She was telling me that she took George to the Natural History Museum. They went there last Thursday.’

“Claire added: ‘She said that George was more interested in a pigeon they found there rather than all the amazing exhibits. Carl told her about the fox that he saw and she was interested in that.'”

So George is more interested in pigeons than dinosaur bones. Got it. 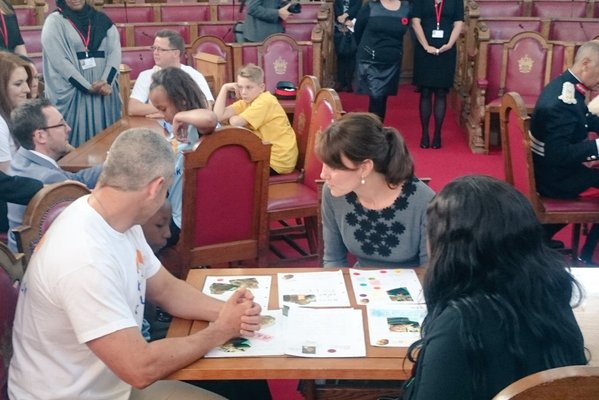 Because we’ve been discussing mental health and how to talk to people suffering from mental health issues a lot lately, this quote from Carl about what qualities a good mentor should have stuck out to me.

“Carl said: ‘I was telling [Kate] about what a good mentor should have. She should be empathetic so she can put herself into the child’s shoes and think about how they are feeling. And also she should be organised.’

“Claire, who has been volunteering as Carl’s mentor for five months, added: ‘These are all the skills he chose for a good mentor and he explained each one in turn.'”

I agree with Carl. I think whenever one is working with people with any sort of problem or disability, it is important to not just be sympathetic, but be empathetic. To genuinely try to understand how they are feeling and how they want to be treated. Mostly people just want to feel like they aren’t alone in the world. 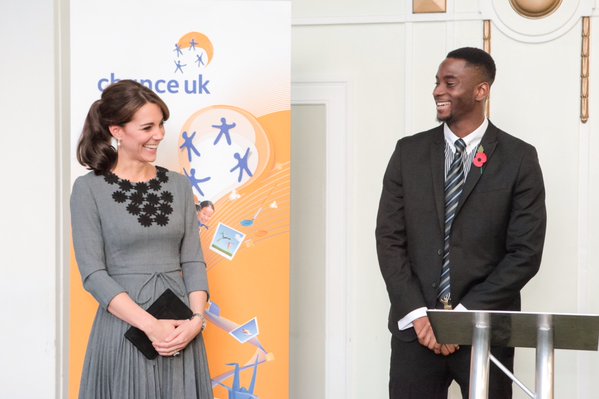 Chance UK is a charity focusing on improving the lives of primary school children, aged 5-11, with behavioral difficulties who are at risk of developing anti-social or criminal behavior by using a solution-focused approach to grow their strengths, build their self-esteem, and find positive alternatives to their challenging behavior.

Oh, by the way. Kate stayed at this event for about an hour. 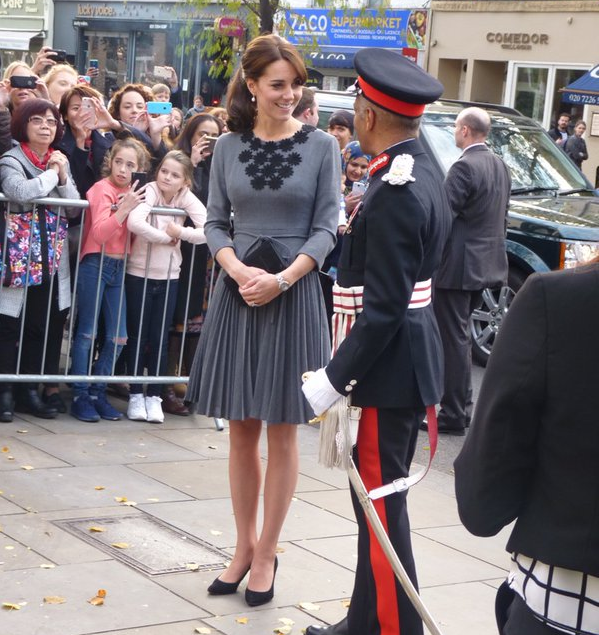 Also while talking to Faith and Elizabeth, Kate mentioned how George likes “ladybirds”, which in American is ladybugs.

From the Express article I linked above:

“Faith said: ‘We were talking about insects and she said George likes them.’

“Elizabeth added: ‘She said George’s favourite was the ladybird.'”

I wonder if Kate bought that ladybug-patterned mug from Emma Bridgewater benefiting EACH for George since he likes ladybugs so much.

What ever happened to that appeal, anyway? I haven’t heard anything about it since February when Kate visited the Bridgewater factory. Kate should really go back to that charity and appeal to remind people of it.

As I mentioned, Kate went with dark grey for the children’s charity visit. She repeated an Orla Kiely dress from the AW2011 collection that she first wore in March 2012 to the Dulwich Picture Gallery.

Kate accessorize with her favorite Stuart Weitzman Power pumps and Mulberry Bayswater clutch (I’m so sick of these two pieces – she’s worn them so much this year).

Kate wore her trusty Annoushka pearl drop earrings and Cartier watch. At least she wore her hair up.

I’ve been wanting Kate to bring back some pieces from 2011/2012 because she has some really pretty pieces from that time, but not this one. I never cared for this dress.

For comparison: Kate in 2012 on the left, today on the right. 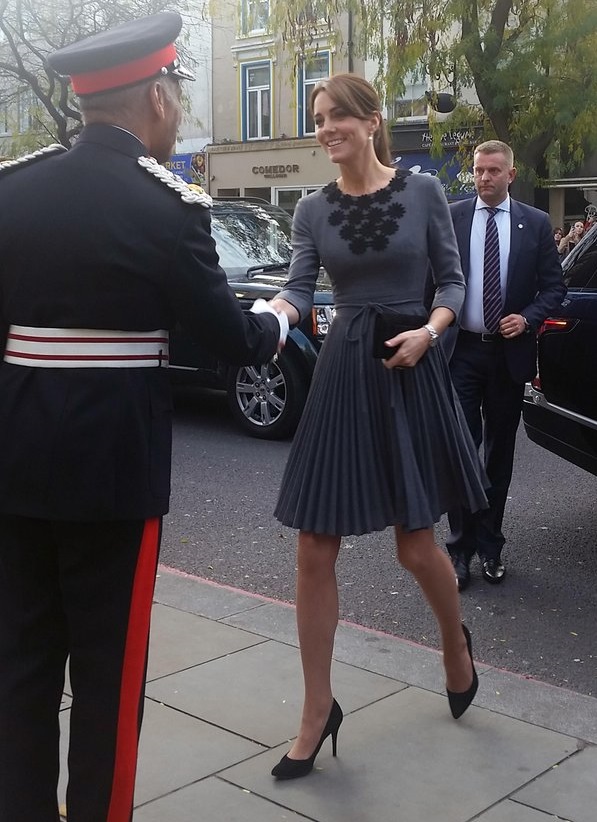