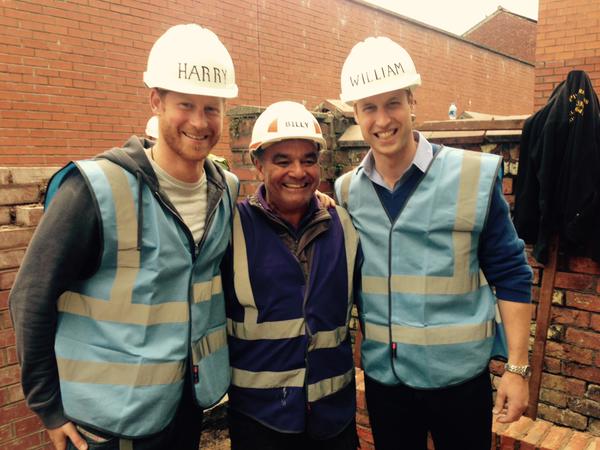 For this particular project, the DIY SOS team are turning an entire street into into homes for ex-services personnel. As well as homes, a support center will be built – to be run by Walking with the Wounded and the Royal British Legion and will assist with retraining and provide support for those injured while on duty. 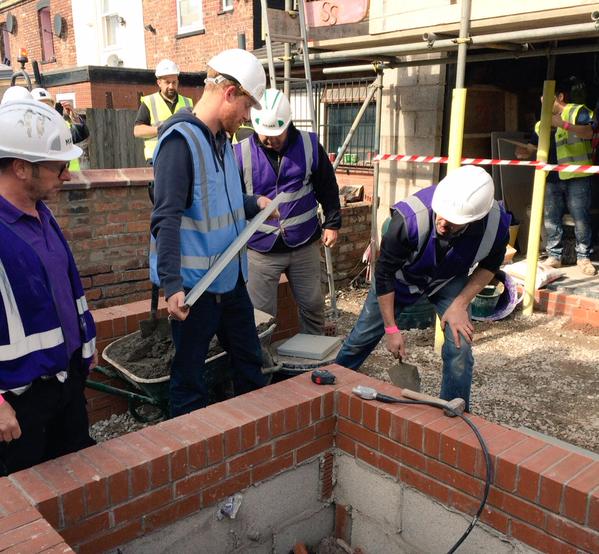 William and Harry toured the site and talked to the DIY SOS crew as well as veterans who were assisting with the renovations. William painted a wall indoors while Harry was outside helping lay concrete for a patio. William wore a button-down shirt and sweater, Harry wore a hoodie and t-shirt, and they both wore hard hats with their names on them. 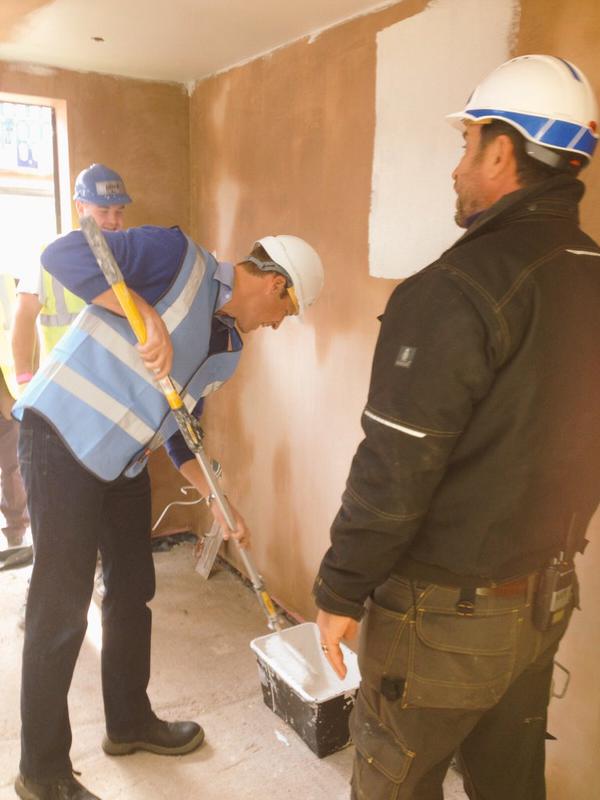 William and Harry also filmed the opening scene for the show and sat and talked to veterans who will live in the renovated homes. The show airs on BBC ONE on October 14 and 21. 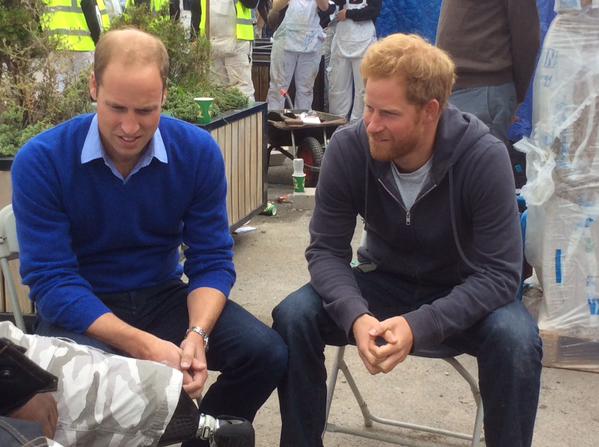 “‘He can come and work on a site of mine any time he likes,’ [Millar] said. ‘Harry really got stuck in laying the slabs, there was no airs or graces. He was a really great lad. There was quite a bit of banter about whether he was laying them properly – he was joking a lot about his rubber mallet – but he didn’t do too badly.'”

“‘Was that the wall he was working on?” [Harry] asked. ‘I can tell. Give me that roller and let me do it properly.'”

I was asked in the comments if I’d heard anything about the next time William, Harry, or Kate will attend any of the rugby world cup matches, and so far I’ve only heard that they will attend the England v Wales match on September 26 (this Saturday). I don’t know if it’s all three of them or if it’s just William and Harry, but People claims it’s all three of them. I looked at the schedule and other upcoming matches they might attend include the Wales v Fiji match on October 1 – William is the Vice Patron of Welsh Rugby – and the England v Australia match on October 3. There is also Australia v Wales and England v Uruguay on October 10. There are other Commonwealth country matches in between the matches I’ve listed.

In other news, Katie Nicholl wrote an article for the Daily Mail in which she discusses how Prince Charles is taking on more and more of the Queen‘s duties, and what the future looks like for The Prince’s Trust.

Nicholl says Charles is “already being called the Shadow King” and will take on more than 650 engagements and visit 14 countries in 2015. Due to his intense workload, he is pulling back from his charities and looking for a replacement to continue his charity legacy. According to Nicholl, “Charles held discussions some months ago with Prince William about whether he would take over as head of the trust – but William indicated he would rather not.” According to Nicholl, both William and Harry (but especially William) are reluctant to take on more royal duties even though “some members of the Royal Family feel the Princes have had enough freedom and now, in their 30s, should buckle down to their Royal roles.”

“Charles … is said to have reached an impasse with William and the Duchess of Cambridge, who have made it clear they want to concentrate on their own charitable foundation.

“‘William has said that he has been asked to take on the trust, but he has mixed feelings about it,’ a source said. ‘He has his own charitable foundation and he wants to make his own mark. If he takes on his father’s legacy, then it means he can’t create his own. William is very definite about wanting to do his own thing. […] I think he had hoped his sons would take on more and help him out, but William and Harry are pursuing their own interests.’

“One palace insider said: ‘William wants to avoid being a “letterhead” on a page and just take on charities that he is passionate about. This is a job with no retirement date so there’s no rush to jump into things. It’s more important to the Duke that he grows a sustainable charitable foundation of his own.’ […]

“‘Since his childhood, Charles has known that he will succeed the Queen,’ said a member of the Royal circle. ‘But he’s in the strange position now of having two sons, but wondering who will continue his legacy.'”

I laugh at the fact that William wants to create his own charitable foundation and his own legacy, considering the only legacy he is creating is one of contempt and laziness. If William wanted to create his own charitable legacy, he could do so easily, but instead he chooses to play pilot and hide out at Anmer Hall. If he really does want to make his own legacy, then more power to him, but it’s time he stepped up and did it.