It’s that time of year again, folks. Time for the now-annual Cambridge Family Polo Photoshoot. This year, they were at the Gigaset Charity Polo Match at the Beaufort Polo Club. Prince George wore his signature blue, because I guess the Cambs don’t realize there are other colors in the rainbow. Kate Middleton, Duchess of Cambridge, wore her now-annual outfit of a 3/4 length sleeve striped shirt, skinny jeans, and boat shoes. Prince William looked like, well, Prince William. And Prince Harry looked like a hot Ginger Prince in his white pants. Oh, and Prince Charles showed up looking dapper in a tan suit.

As I mentioned, Kate wore a very similar outfit to the one she wore last year. I guess this is her Polo Photoshoot outfit. This year, Kate wore a new navy and white striped ME + EM shirt with 3/4 length sleeves, the “Breton” top (£48.00). It’s the exact same shirt Kate wore last year just in a different color way. Kate wore a pair of skinny jeans and her ugly boat shoes she always wears (I guess she has no other flat shoes). She wore her Cartier watch and no earrings.

My dearest Catherine: I know that George is a boy, and blue is for boys, but there are other colors in the rainbow that work just as well for boys as blue. While I don’t think there is any problem with boys wearing pink or purple, I understand you not wanting to draw criticism from people who would think negitively of you for dressing a boy in “girl colors”. But why not red, orange, yellow, green? There are a lot of hues of these base colors that would look fabulous on a little boy. Please consider all of these other glorious colors when shopping for clothes for George in the future. George is a cute kid, but he doesn’t always have to be dressed in blue. Your most humble servant, KMR.

Is she scolding him here?

Joining the Cambs and Harry at polo were the Phillips clan. Zara Phillips Tindall and her husband Mike Tindall brought out Mia Tindall (above), and Peter Phillips and Autumn Phillips brought out their daughters, Isla Phillips and Savannah Phillips (below).

You know what would have been really awesome? Seeing Prince Charles hold Prince George. Or even just interact with him in any way at all. In all of the photos I saw (in articles, on Getty, on Rex) not one of them included Charles even interacting with George. The most there was was Charles looking down at George as he walked by. Charles interacted more with both Zara and Isla Phillips.

Below is the hilarious cover of the Daily Mail featuring the headline, “I fear I’ll never see my boy again”, juxtaposed with a photo of George trying to get away from Kate. Ah, man, the layout people at the Mail are hilarious. 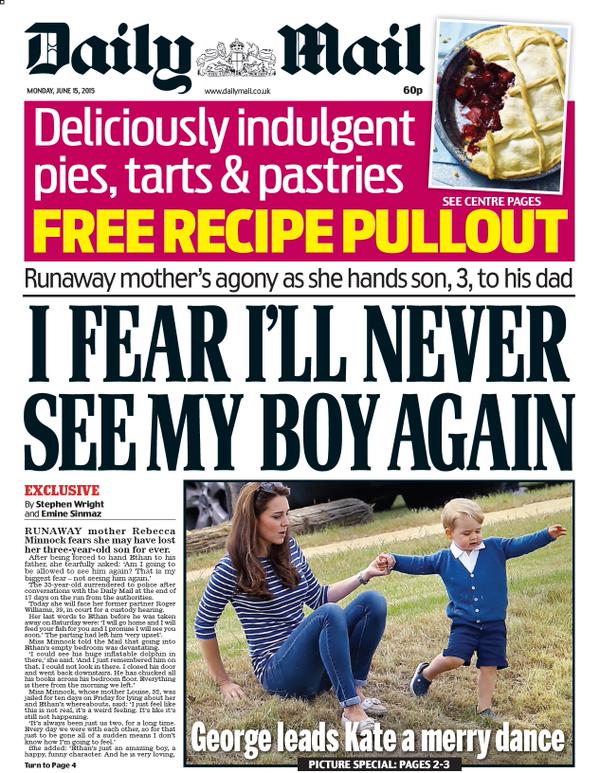 For your Prince Harry enjoyment: