I was going to do a whole post dedicated to Prince George‘s wardrobe and how he has only worn three different colors in his entire life (in the photos that we have), but then I saw some other tidbits about Kate Middleton, Prince William, and Prince Harry that I wanted to share, so I changed the post around.

I’m going to start with the polls, then move on to the other stuff. First, let me say that when I went through and counted all of the photos that we have gotten of Prince George since his birth, I was surprised at the number; I thought it would be lower.

We have seen pictures of George 25 times since July 22, 2013. With 6 of those being “unauthorized” photos (though there are more “unauthorized” photos floating around out there, these are just the ones I’ve covered). Of those 25 photo ops, George has only worn three different colors: blue, white, and red. Even when George wears white, there is a sprinkling of blue on there. And the two reds are actually the same red overalls. George has worn blue 18 times, compared to red 2 times and white 2 times (not including the Christening gown or the white blankets). Seriously, Kate, boys don’t always have to wear blue. They can wear green and yellow and orange, too. 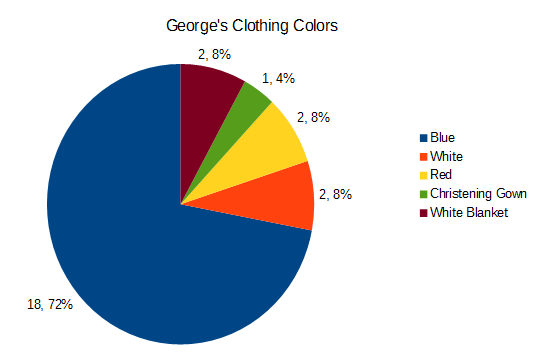 I kind of feel like I should only include blue, red, and white in the “Which Color Will George Wear to Charlotte’s Christening” poll because those are realistically his only options (and given his track record, he’ll wear blue), but for kicks I’ll add in some other colors.

I’m also including a “Which Color Will Kate Wear to Charlotte’s Christening” poll for kicks. Kate wore cream last time in order to match the Christening gown. As with George, Kate’s most worn color is blue. Will she go blue, cream, or another color on Sunday?

Moving on to other stuff now: I know there was some debate about the pics of Prince George with Nanny Maria by the helicopter that appeared last week, and what day they were taken and if Prince Harry really was taking that helicopter, since we didn’t actually see Harry in the photos. Well more pics of that day have come out, and yes Harry was taking that helicopter, and he is in uniform which means it was official business which means the pics were taken on June 11 as Harry left to go to the Camp Bastion Memorial Dedication Service, even though Star and the photo agency say they were taken on the 12th. Here’s a link to more pictures.

Speaking of Harry, he’s either currently in Africa or heading there this week. He will miss the Christening on Sunday. I guess that rules him out as a godparent.

Will and Kate have invited well-wishers to view them and the other royals walking into the church at Sandringham for Charlotte’s Christening on Sunday (like how well-wishers can view the royals walk to church at Christmas). Expected guests are Prince George, the Middletons, the Queen, Prince Philip, Prince Charles, and Camilla. As well as the godparents and other guests.

The woman who runs Amaia Kids clothing shop has given an interview to Hola (via Hello – they are sister publications) about Kate and her shopping habits. Amaia said:

“The first time she came into the shop she was with her mother. It was quite funny because she said, ‘I’ve just had a baby and I’m a little lost. Would you be able to help me?’

“She usually comes alone and although we show her everything we have in the size she needs, she usually knows what she wants. She’s very decisive but she does let us make suggestions, and sometimes she buys things she wouldn’t have picked up.

“Three weeks before the Princess was born, she came in and bought three cardigans, three shirts, two pairs of shorts and long socks.”

Amaia kept reiterating how charming, sweet, and natural Kate is.

Kate was supposedly seen out shopping yesterday in Norfolk. So I guess she’s back at Anmer following her tea with Brad Pitt and Angelina Jolie on Friday.

Speaking of that meeting with Brad and Angelina, here are some supposed photos of Pitt and Jolie arriving at Kensington Palace on Friday.

If you want some sugar with your morning coffee, check out the Twitter hashtag #WhyILoveKate. It’s pretty funny.