I can’t wait for the royal baby to be born. Not because I’m super excited for the new baby, or even interested in if it’s a girl or boy and what the name is, because those feelings have passed. Now I just want the baby to be born so the madness will stop. As of right now, Kate Middleton has not gone into labor yet.

Westminster Council extended the parking restrictions outside the Lindo Wing. They run until May 5th now. As cool as I think it would be for the baby to be born on Star Wars Day (May the 4th be with you), I really hope we don’t have to wait that long.

By the way, to clarify things, KP never told us an actual due date. They said April, and Kate said at an engagement that it was mid-late April. The press came up with the due date of April 25th. So we don’t actually know if Kate has even reached her due date yet. Because of the dates of the original parking restrictions – April 15-April 30 – one could guess that her due date fell in between those two dates to give it one week prior and one week after, so April 22/23. Which would make her a week overdue at this point. But the due date could have been later. 28 weeks after the 12 week scan visit would have put the due date on April 29. So who knows. It seems the only people who will win our birth poll will be the people who voted for May 1 or later. I really thought she would have given birth by now.

Yesterday was Prince William and Kate’s 4th wedding anniversary. To celebrate they apparently visited Buckingham Palace together. They were spotted leaving. Not sure if Prince George was with them. The Queen is not currently in residence at BP, so no, they weren’t hanging with the Queen. It is speculated they were using the pool. Apparently swimming helps induce labor or something.

The Kensington Palace press office decided to troll everyone on Twitter by posting a throwback photo of the Cambridges leaving the hospital with George a few minutes after there were reports of a convoy leaving KP. I guess the KP press office is as bored of waiting for the new baby as we are.

The DM has a sickeningly sweet article about Kate in honor of her 4th wedding anniversary yesterday.

“No longer a private citizen, her life is now one of endless engagements, royal tours and a constant battle for normality in the face of a constitutional role that makes doing so all but impossible.” – Endless engagements?

“Looking marvellous in a floor-length beaded gown by designer Jenny Packham, the Duchess played nervously with her hair and looked slightly abashed by all the attention as she made her way down the red carpet.” – Because Kate never plays with her hair anymore *eyeroll*

Today is Terry Hutt‘s birthday. Hutt is one of the superfans camping outside the Lindo Wing. Hutt turns 80 today. He said (via People): “It would be a bonus for me if she had the baby today. I would feel closer to the family.” Happy Birthday, Terry!

The card reads: “Dear Terry, This comes with our best wishes on your 80th birthday. from the team at Kensington Palace”

The card is William’s letterhead but the handwriting is neither William’s nor Kate’s. The KP press people are paying attention to the news and sent him a card and cake when the reporters reported that it was Hutt’s birthday. I think this was such a nice gesture from the KP team. 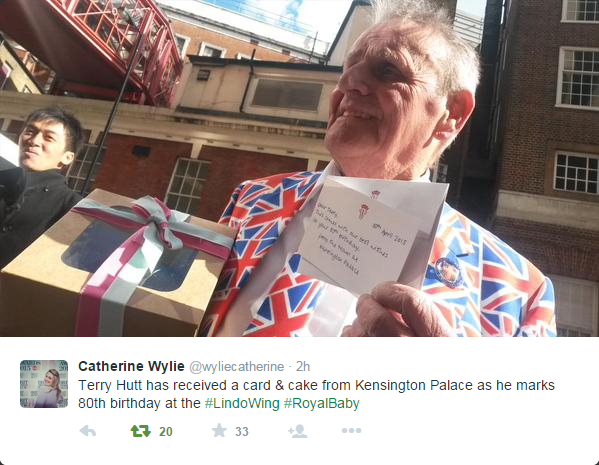 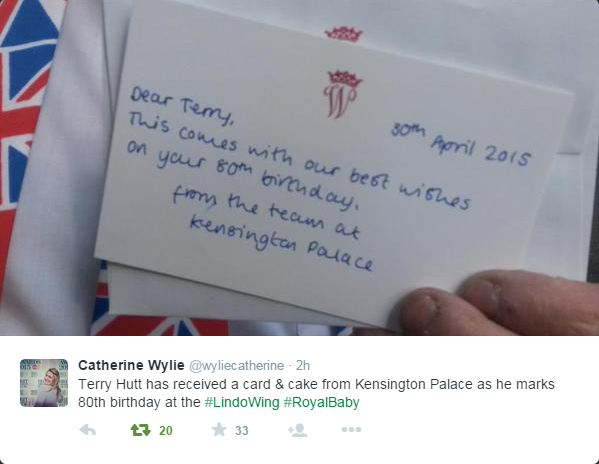 120 thoughts on “William and Kate celebrated 4th anniversary at BP”