As many of us hoped, Kate Middleton, Prince William, Prince George and the Middletons were photographed in Mustique by a paparazzi. The NY Daily News published them – go here to see all the photos. They include a photo of Pippa in a bikini (and a girl in a pink bikini in the foreground with a wedgie), as well as photos of William, in tragic neon green swim trunks, with Pippa, James, and Michael Middleton at the beach. Also there are two photos of Kate holding George’s hand as they and Nanny Maria are out walking. The photos are from the back and side, and Kate is carrying a large bag in front of her body, so we didn’t get a good shot of her baby bump that I was hoping for. I really wanted a bikini shot of Kate so we could see her belly. No word yet if William’s head has exploded. God I hope he complains. That’ll be hilarious.

All I have to say about Nanny Maria being there is HA! In the reports in the papers about the trip, they said emphatically that Nanny Maria did not go with Will and Kate to Mustique (because Will and Kate are such hands-on parents that they didn’t need to bring the nanny). So ha, photographic proof that the papers were wrong. Of course they brought Nanny Maria, of course they did. Will and Kate can’t handle that baby on their own, plus they want to spend time vacationing and they can’t do that if they have to keep George from punching everyone all day.

BTW, in the second photo of Kate, she and Nanny Maria and George are walking by a beachwear store. Who knows if she actually went in, but if she did (and she is wearing a piece from the shop, which BTW is not maternity wear), damn the girl never stops shopping.  Also, is it weird that I kind of think Kate knew there was a photog there?  She’s looking directly at the camera.

While William has yet to complain, the royal reporters already have: from not being allowed to publish the photos in the UK to not having seen George in public (in the UK) since the day he left the hospital. I will say that it may not be a “the UK won’t publish unauthorized photos of the royals” thing but a “the NYDN has the exclusive rights to the photos” thing. We’ll have to wait and see if anyone else publishes the photos.

I know I said this above, but god I hope William complains. I need some “William blowing a gasket” humor in my life. 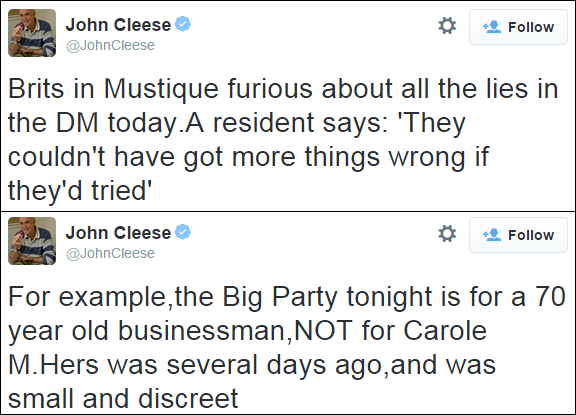 I have to say, Villa Rocina is really beautiful; I wouldn’t mind staying there for a weekend. Two full weeks? I’d get bored. But a weekend would be nice.

PS. There is a report in the John Cleese-hated DM that Prince Charles is worried about William’s closeness with the Middletons. Some highlights:

Nothing will please Charles more than the arrival of a second grandchild this spring, and yet he knows that, just like 18-month-old Prince George, the new baby will be drawn into the warm embrace of the Middleton family.

What worries the Prince of Wales is what those around him refer to as the ‘Middleton-isation’ of William, something he feels there is little he can do to change.

Kate and William have always spent much of their spare time and holidays with her parents, Carole and Michael — even before George was born — and little time with Charles at Highgrove… There is no great bond between Camilla and Kate.

When it comes to the Middletons, one has to ask: just what is Charles worrying about?

What is noticeable is that William is clearly attracted to the easy-going, non-royal way the Middletons live, so different from the stiffly royal outlook of his father and so much more in line with an approach to life to which his mother, Diana, was introducing him and brother Harry.

With the Middletons, William loves the family atmosphere he never knew and gets on well with his father-in-law, whom he calls Mike. He particularly enjoys the total absence of status…

How ironic that William’s father, the man who wants to modernise the monarchy, finds his more traditional instincts aroused by the fear that, through the Middletons, William could be loosening the moorings of his royal roots…

‘William has always been a bit difficult with his father,’ says one of Charles’s former aides. ‘There are aspects of the way he runs his life that William doesn’t like.’

So what is Charles worried about? Is Charles worried about William (and George and the new baby when it’s born) becoming more Middleton than royal and therefore skirting royal duties and eventually bringing down the monarchy? Or is Charles worried that William is acting “more in line with an approach to life” that Diana was introducing him to? Is it about William preferring to be a lazy, entitled Middleton over a working royal, or is it about Diana? Because this piece kind of makes it sound like Charles is still hung up on his children preferring Diana, and her approach, over him. Yes, there is a Middleton-ization of William and it will destroy the monarchy, but if Charles is seeing that through an “I’m still envious of Diana” lens, then he’s not seeing what’s really going on and will not be able to change it.