Sigh. They dragged poor Hillary Clinton into this, didn’t they. And apparently Duchess Kate really wanted to meet the Former First Lady, because Kate made an appearance at the conservation reception that she wasn’t originally scheduled to be at. That’s the highlight of this rest-of-day-two post. The lowlight? Prince William and Kate Middleton meeting Beyonce and Jay Z at the NBA game. Ugh.

We’ll start with the highs, and not just because it came first in the evening. William and Kate attended a reception at the British Consul General’s residence on behalf of Tusk Trust and United for Wildlife, where William, Hillary Clinton, and Chelsea Clinton all spoke about fighting the illegal wildlife trade. The event was co-hosted by the Royal Foundation [etc] and the Clinton Foundation [so much shorter!]. When Hillary Clinton spoke to Kate, she apparently told her a cute story about when Chelsea was a baby. Hillary would often sing to Chelsea, but then when Chelsea was a toddler there was a point when she would say, “No sing, no sing!” Because even as toddlers, children are embarrassed by their parents. Adorable! This wasn’t a random story, it relates to Kate’s earlier visit to Northside Center. The Former US Secretary of State said, “We’re trying to encourage more people to sing… because the research suggests that it’s beneficial.”

At the reception, William told guests: “I’m pretty exercised – to put it mildly – about the plight of some of the world’s most iconic species. These species are being illegally butchered in the name of trinkets and medicine. It’s easy to blame others for the problem – demand in South East Asia, not enough protection on the ground, and so on. But, if I may say, we could start with looking closer to home. Our own nations still have thriving black markets in these products, and we have to raise the game at home as well as abroad. But it’s not all doom and gloom. You’re the lights at the end of the tunnel. What all of us in this room represent, and tens of thousands of people out there, is solid purpose – a determination not to let our generation be the one that let this catastrophe occur. Time is running out, but this room reminds us that support is not running out. We can be optimistic.” 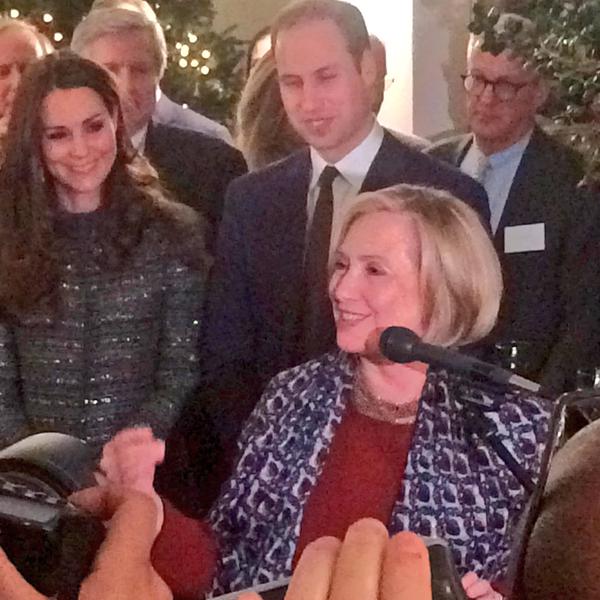 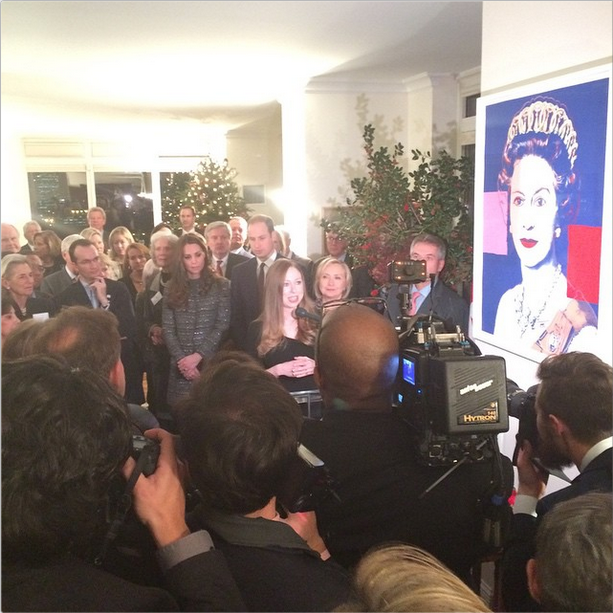 After the reception, William and Kate headed over to the Barclays Center to launch the partnership between the Royal Foundation, United for Wildlife, and the NBA. William and Kate met with NBA Commissioner Adam Silver, Global Ambassador Dikembe Mutombo, and Sr. Vice President, Community & Player Programs Kathleen Behrens, among others, to launch the program. Will and Kate also met LeBron James (I refuse to use his self-titled nickname), who presented them with a full-size jersey, and a mini jersey for Prince George. There was also a dinner before Will and Kate sat courtside to watch the second half of the game between the Cleveland Cavaliers and the Brooklyn Nets. Then came the blatant pandering to celebrity when the Cambridges met Beyonce and Jay z. According to the Mail, “Kensington Place courtiers had previously arranged with NBA officials that the two couples would meet during the third and fourth quarters of the game.” So that was always going to happen. Ugh. I realize a lot of people are fans of Beyonce and Jay Z, but I get aggrivated when people refer to them as “American Royalty” and call her “Queen B”. I think they are highly overrated. I am not a fan of their music at all really. Beyonce has had some fun dumb pop songs, but mostly her songs aren’t great. Anyway, enough of my dislike of Beyonce and Jay Z, back to Kate… 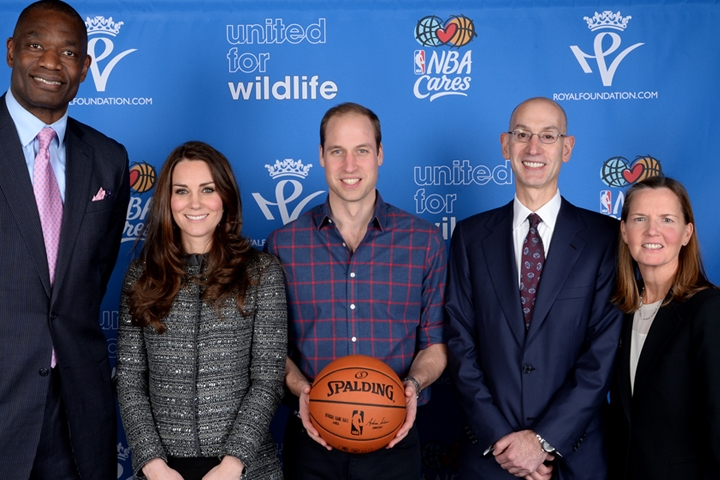 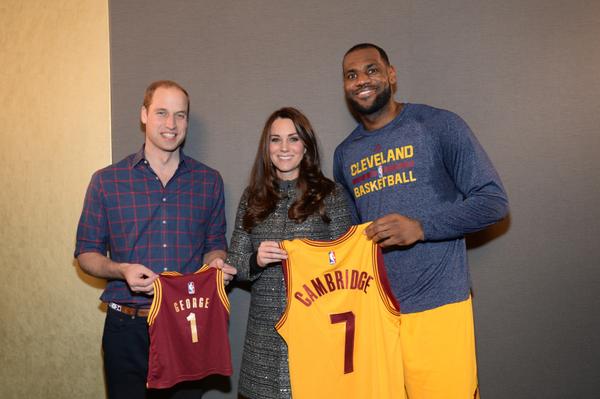 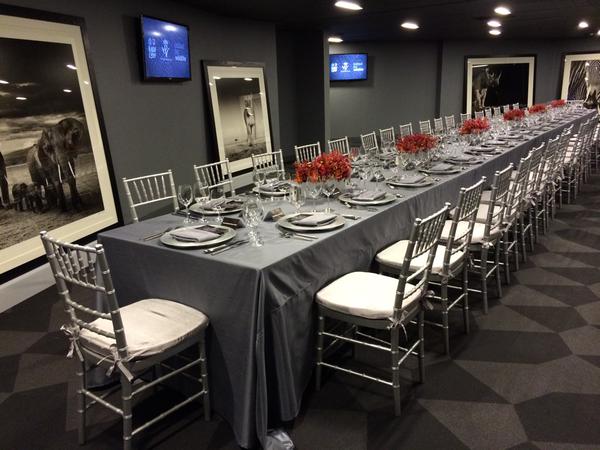 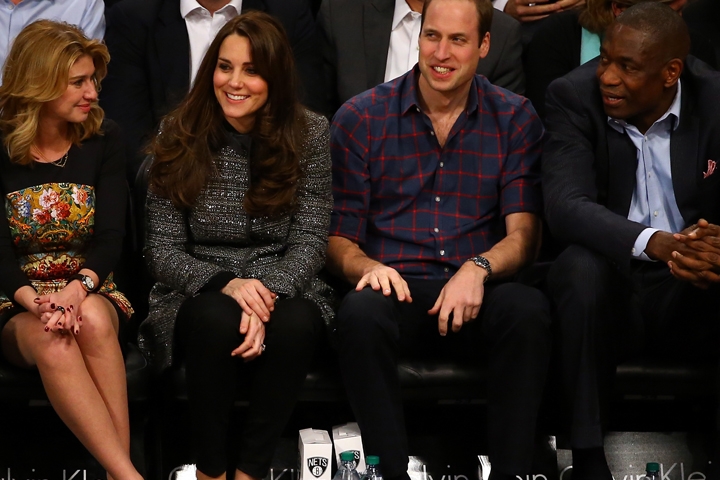 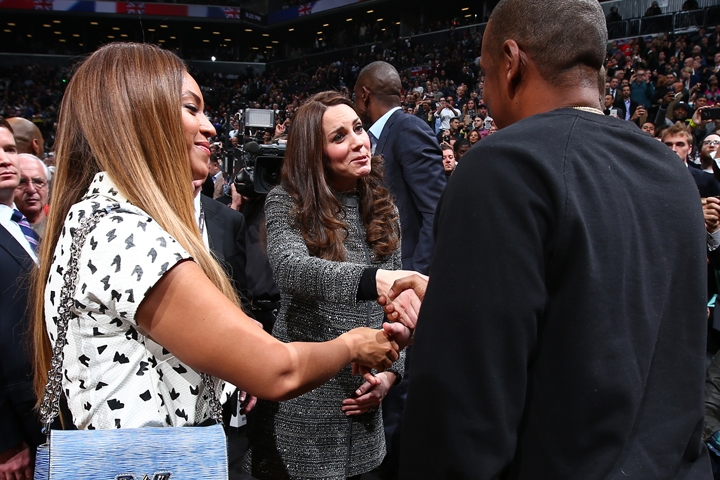 Will and Kate ate popcorn during the game.

Kate chose an American designer that she’s worn before for last nights appearances: the Tory Burch Bettina Coat (usually $595.00, but was on sale at $357.00 before it sold out). The coat is grey with metallic fibers. Kate also wore black skinny jeans and a black sweater under the coat. Ugh at the skinny jeans but at least she was wearing a coat so we couldn’t see the outline of her thigh gap. Kate carried her Mulberry clutch and wore Stuart Weitzman pumps.

Alls I have to say about day three’s appearances (less the Ground Zero visit) is homegirl better wear some bloody color!

Kate busted out some new (or new to me) earrings. She’s on a roll with the new ear bling – maybe she heard my pleas to switch up her jewelry. Kate wore the Crocodile Stud Silver Earrings from Zimbabwean designer Patrick Mavros. According to this report, Kate has had these earrings for years, but just hasn’t worn them publicly since she married. I like them, they’re cute and fitting for the event. 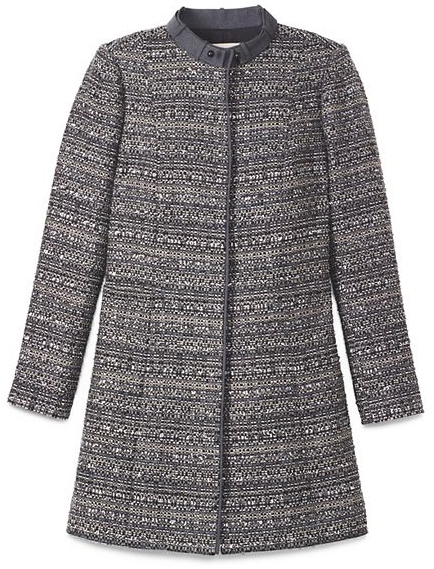 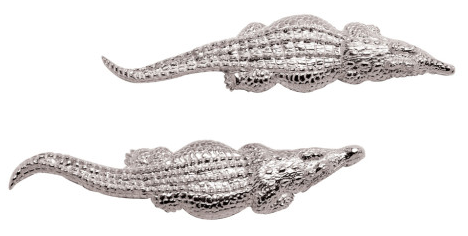 By the way, there was a protest going on outside the Center, dubbed #RoyalShutdown. It was about the Eric Garner death and the grand jury’s refusal to indict the police officer who killed him via chokehold.