So… about that dress code thing… American journalists have been issued a dress code for when Prince William and Kate Middleton visit New York City and Washington, D.C. in December. There was possibly an email sent to the American journalists – as claims the Daily Beast – but all of the other stories I read simply quoted the Politico story which did not mention an email and was simply quoting the British Monarchy website.

I’ll post links to the Policito and Daily Beast stories at the end of the post, but I’m not going to quote either of them since both simply quote the Palace’s website about proper journalist attire. Instead, I’ll just quote the Palace website directly:

Journalists wishing to cover Royal engagements, whether in the United Kingdom or abroad, should comply with the dress code on formal occasions out of respect for the guests of The Queen, or any other member of the Royal Family.

Smart attire for men includes the wearing of a jacket and tie, and for women a trouser or skirt suit. Those wearing jeans or trainers will not be admitted and casually dressed members of the media will be turned away. This also applies to technicians.

This is the requested proper attire for journalists covering the Royal Family that I’m sure is sent to ALL journalists wishing to cover the Royal Family and is clearly stated in two different places on the Palace’s website. Like, this dress code is not new, not about any specific royal, and not for any one country’s journalists specifically.

I’d be willing to bet $100 that the journalists in New Zealand and Australia (ahead of Will and Kate’s April tour) got the same email that the American journalists got.

Look, I’m an American, I get it, we don’t like being told what to do by two lazy royals whom we fought two wars to get away from (let’s not forget about the War of 1812, y’all!), but… I’m not actually offended by them this time.

*Cowers in the corner* Stop throwing tomatoes at me, you guys! I know I’m in the minority here, but I don’t see a problem with this. This dress code is not specific to Americans because the Brits think we’re unkempt heathens or something; the royals expect ALL journalists from both the UK and foreign countries to dress professionally. And this dress code is not new which means it’s been issued to the American journalists before, so I don’t see why people are only freaking out now.

I’m surprised the White House doesn’t have a dress code (I tried to find one on their website and couldn’t). I would expect all political leaders, congresses, and royals, etc. to have dress codes for journalists both at home and abroad. Is that not normal?

Was there actually an email sent or was this some paper pulling something from the Palace website and making it a bigger deal than it really is?

Either way, I don’t think it’s rude that the royals are asking journalists to dress professionally. In fact, I think this is a non-story. Having said that, I’m still going to say: Someone should tell Kate the dress code of keeping her bum covered during official visits.

You know what is a story? Will and Kate have just appointed their new press secretary after reports surfaced that William was being a jerk about hiring someone. Coincidence? Or did someone put their foot down? This new press secretary’s name is Jason Knauf (he’s an American, by the way) and he will join Will and Kate’s household in the new year. Knauf currently works for the Royal Bank of Scotland and has previously worked for HM Treasury.

Also a fun, little story: A picture of Prince Charles holding his grandson, Prince George, has surfaced. During a Google Hangout to mark the first anniversary of the £iwill campaign, the picture was spotted on a table in Charles’ sitting room at Clarence House.  I mentioned at the time that I wished we had gotten a picture of Charles holding George.  How adorable. 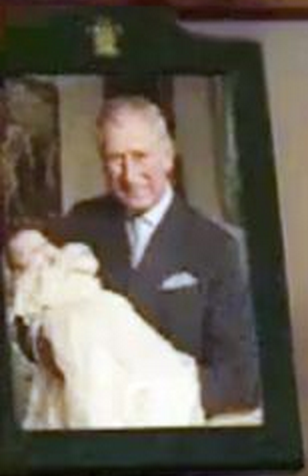 113 thoughts on “Will and Kate’s office issues dress code to American journalists: rude?”