As Patron of SportsAid (since 2013), Kate Middleton attended the SportsAid athlete workshop at the GSK Human Performance Lab yesterday, November 12. The Duchess of Cambridge was there to see thirty 16-20 year old athletes take part in a series of scientific assessments on respiration, temperature, power, cognition and body composition designed to help them reach their goal of attending the Olympic Games in Tokyo in 2020, or the Paralympic Games in PyeongChang in 2018. Paralympic wheelchair athlete David Weir CBE attended the workshop as did Olympic swimmer Keri-anne Payne, who gave a mentoring session. 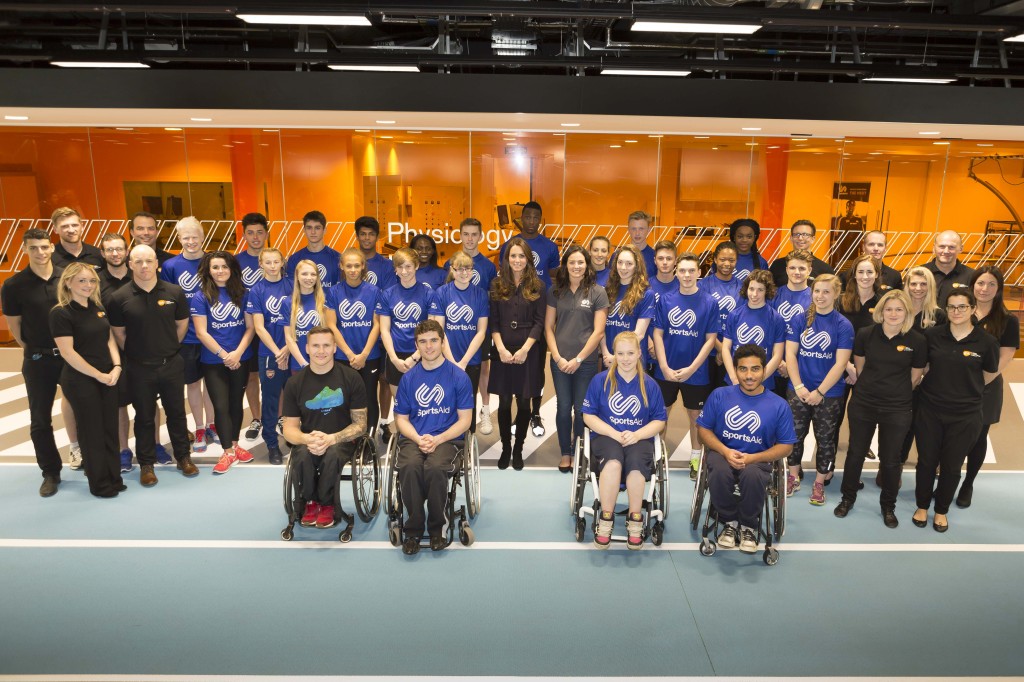 SportsAid helps the next generation of British sports stars by giving them financial support and recognition during the critical early years of their careers. These athletes are typically aged 12 to 18 and are among Britain’s brightest hopes for future Olympic and Paralympic success. Some past SportsAid athletes include Rebecca Adlington, Jessica Ennis, Bradley Wiggins, and Mo Farah. 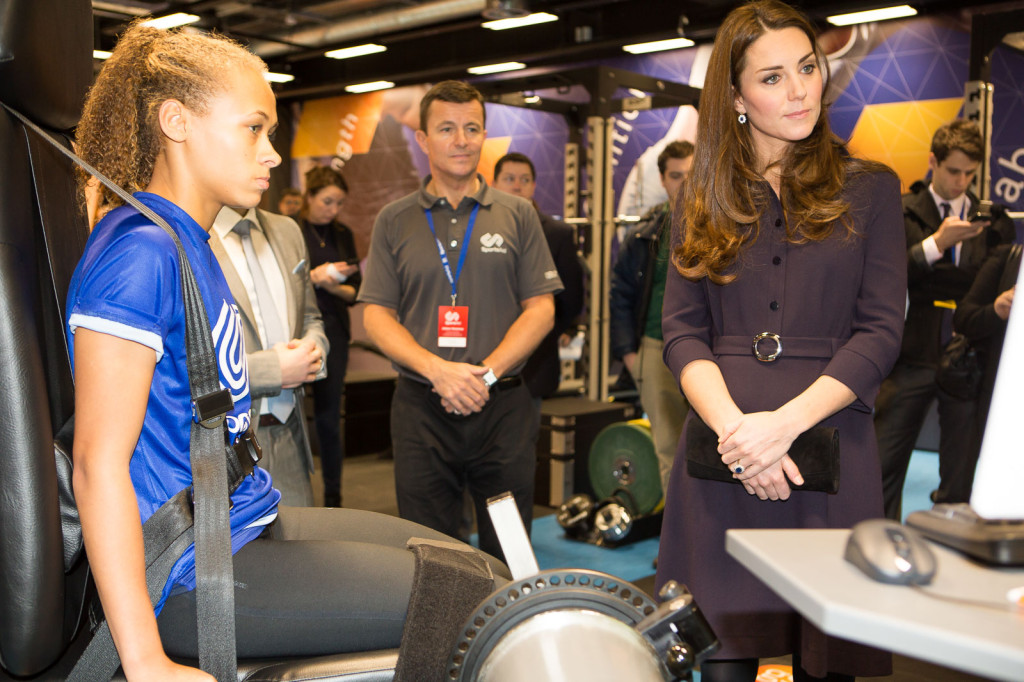 From the Daily Mail: “The Duchess of Cambridge couldn’t help laughing today, after realising that she had been attempting to have a conversation with a young athlete who was wearing heavy-looking mask and unable to speak. Golfer Emma Allen, 17, from Southampton, was one of a group of athletes to be put through their paces in front of the Duchess as she toured the GSK Human Performance Lab in Brentford. Realising that Miss Allen was unable to reply, a clearly amused Duchess burst into laughter before getting the explanation she was looking for from one of the lab staff instead.”

I have no idea what that mask does, but just from looking at the photo (above) I know there is no way Emma Allen can talk while wearing it. Plus, she’s on the bike. Whenever I’m doing hard cardio at the gym, the last thing I want is to be forced to try and talk to someone. I think it was pretty thick of Kate to think Miss Allen would even be able to have a casual chat while she was undergoing that performance test. I mean hell, even if she could talk through that mask, her speech would be intensely muffled. So dumb.

After her performance assessment, Miss Allen said of Kate, “I know she is very sporty and loves her hockey. It’s wonderful to have a figurehead like her for me, especially as a girl.” Seriously? Having the likes of Jessica Ennis and Rebecca Adlington to look up to – who actually went through the same program – doesn’t work better?

Is it just me or does Kate look like a demon in this photo? Like, there is so much darkness around her eyes, but then there’s the bright white right in the middle. It gives a demon-esque vibe. 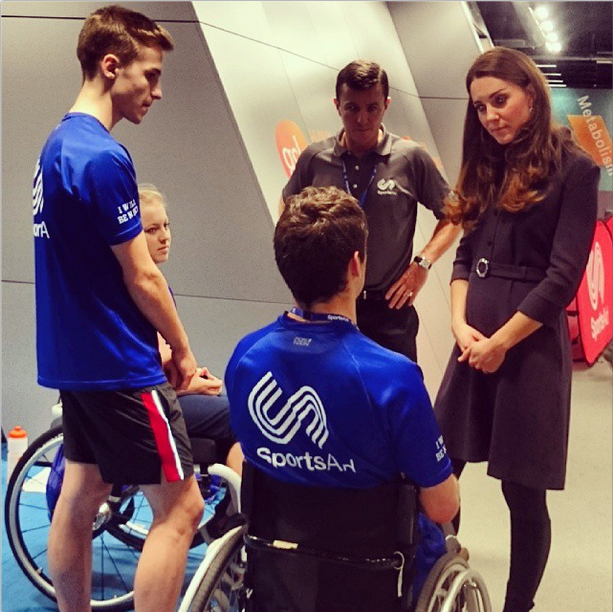 Kate was asked if she wanted to try one of the exercises the Lab offered which tests mental agility, and she said: “Finally, something I can do while I am pregnant!” Because apparently she has been unable to exercise due to her second pregnancy. I know that women can exercise while pregnant because there are pregnant women who exercise at my gym, but maybe Kate’s doctors told her she couldn’t for some reason. But it’s kind of a d-ck thing to say when you’re at an event with at least four people in wheelchairs. Girl, pregnancy is not a disability. It’s not the end of the world that you can’t exercise like a mad woman during your pregnancy; I’m sure you’ll be back to exercising in six months, calm down.

The cognitive tests, preformed by neuroscientist Barry O’Neill, involved tapping colored circles on a large screen, with four rounds of increasing difficulty – these included pressing one color and not another, and ignoring verbal instructions designed to confuse while pressing the buttons. Afterward, O’Neill said, “She actually did very well for a woman of her age. I’m not being rude, I must stress, but your reflexes do decrease every decade you age.” Lol. If he told Kate that, I hope he was more finessed about it than he was when telling Rebecca English.

When O’Neill told Kate that Jensen Button, 34, had completed the tests flawlessly, Kate said: “It makes you wonder whether he is a good driver because he is so sharp mentally or whether the years of driving have honed it. It’s remarkable that people haven’t really thought before of working the mind and body as one. This could be used in so many environments, even in an office. It is absolutely fascinating.”

That’s actually a pretty good response. I mean, it at least acknowledges that the man was a racing driver and what the Lab’s intentions are. It’s not super generic and not super stupid.

Kate wore another new dress for yesterday’s event, the Goat Vreeland Dress in Iris, a deep plum color (£450.00). She also wore new boots, the HalfNHalf Stretch Rider boots by Stuart Weitzman for Russell and Bromley (£395.00) – these have a much lower heel than she usually wears, only 1.25″, which is awesome, I love seeing Kate not tower over people in 4 inch heels plus a 1 inch platform. Kate carried her Stuart Weitzman Muse clutch, and wore her sapphire and diamond earrings (Can I just call them the Diana earrings? Writing out “sapphire and diamond” takes so much more time). She wore tights again.

No skinny jeans!! Thank god. This outfit isn’t my favorite (kind of boring), but I have to say that this is a great outfit for a sports event. This outfit is a nice casual dress and nice flat-ish shoes, complete with tights so nothing inappropriate could possibly be showing. It’s not too informal like her horrendous skinny jeans and it’s not too dressy. The dress is still ridiculously overpriced, but whatever. This is how Kate should dress for a sports event, rather than subjecting us to her thigh gap in too tight skinny jeans. 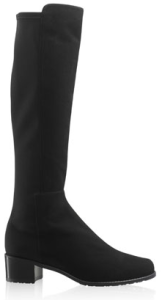 By the way, SportaAid’s SportsBall is November 27 this year. I wonder if Kate will attend. She attended last year’s SportsBall. 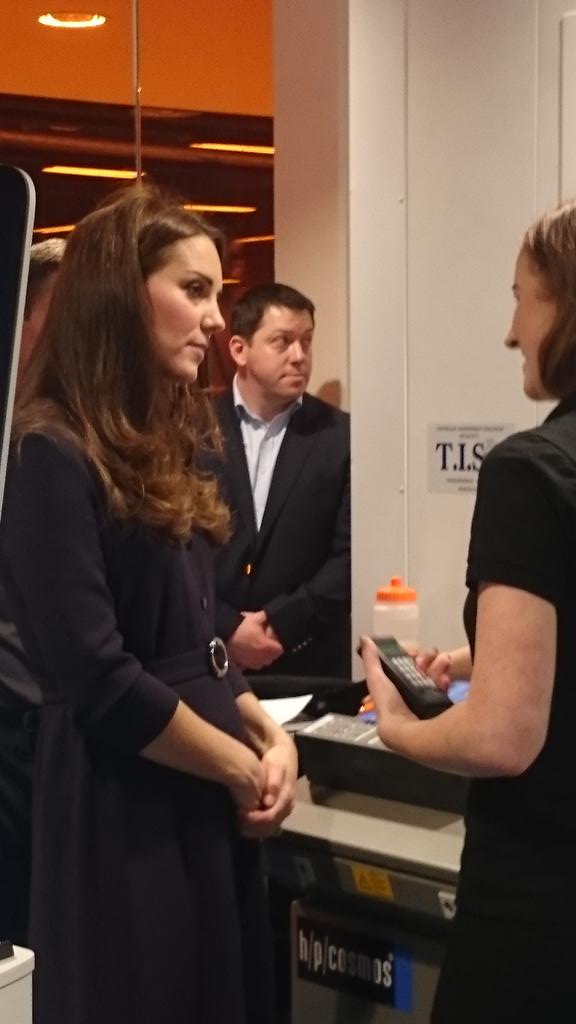 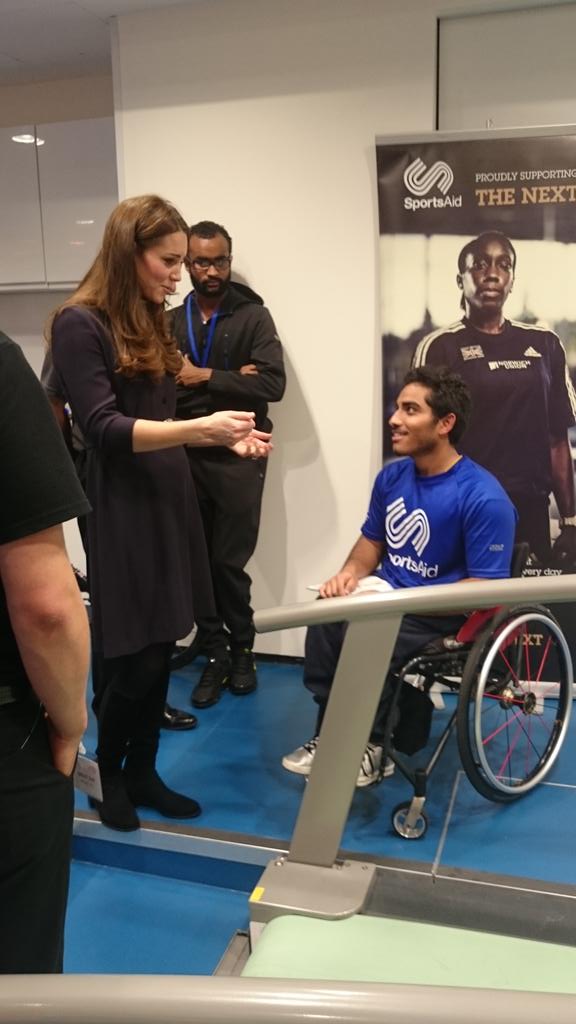 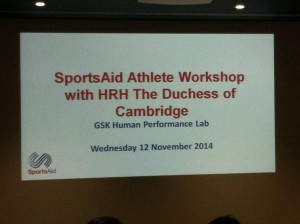 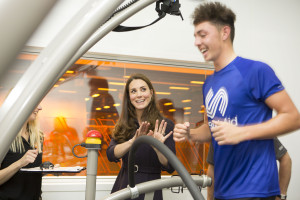 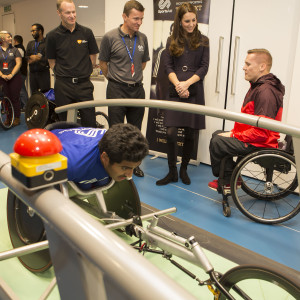 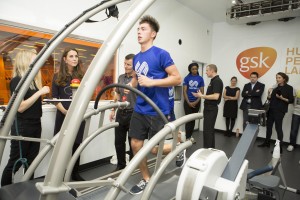