Our dear Kate Middleton, the Duchess of Cambridge, made her first public appearance since announcing her second pregnancy and OH MY GOD she had another skirt fly-up. I shake my head at her. Here I was hoping to write something nice – she brought back one of my favorite hats (the Jane Taylor grey hat she wore to Easter service), and she wore a low ponytail which was elegant – and then she had to go and have her skirt fly up again. Thank goodness it wasn’t a full Marilyn, and you can barely see any of her thighs because I believe she’s wearing a dress underneath (if she wasn’t, though, holy crap she would have flashed everyone), but COME ON Kate, this is your first participation in a State Visit and you pull this? You have no idea how disappointed I am, you guys. I was really hoping Kate would nail this appearance. Why do I keep doing this to myself? I keep getting my hopes up that Kate will knock it out of the park and then she does something stupid. When will I learn? 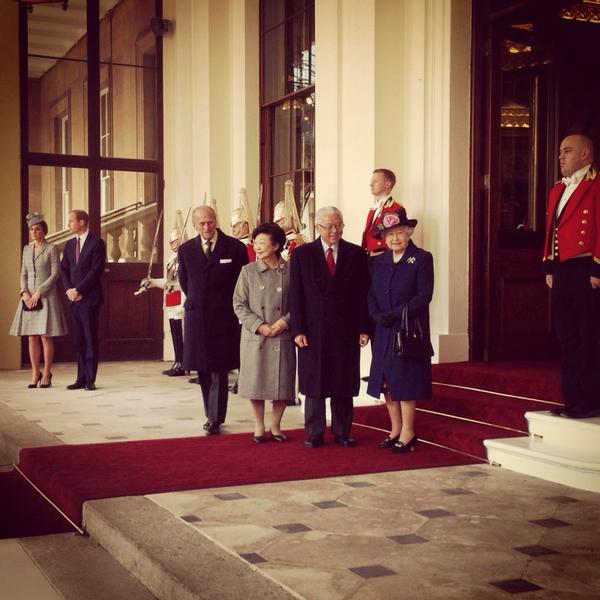 Now that I have that off my chest, I can start with what I would have written first had I not seen her wardrobe malfunction. Kate took part in her first ever State Visit, as her first of two public appearances today (I’ll have another post with the NHM visit later). She, along with Prince William, greeted the President of Singapore Tony Tan Keng Yam and his wife Mary Chee Bee Kiang at the Royal Garden Hotel before escorting them to Horse Guards Parade where they met up with the Queen and Duke of Edinburgh for the Ceremonial Welcome. There was a carriage procession back to Buckingham Palace – Kate and William rode in the third carriage, the Scottish State Coach, with Grace Fu, Singapore’s second minister for foreign affairs.

While having tea with the President of Singapore and his wife, Kate said, “It’s a bit colder than our last meeting.” To which he replied, “The weather is lovely.”

When the President’s wife said she was glad Kate could make it, Kate said, “So am I . I’ve been looking forward to getting out of the house, that’s for sure.”

I always think it’s funny when people talk about the weather in conversations; it’s such a cliche, you know. And if Kate was looking forward to getting out of the house, she had plenty of opportunities to, and then she dropped out of them.

William was his normal, grumpy, privacy-obsessed self. When the President commented on the view of Kensington Palace, William said, “You can probably see into our bedroom window which is a bit worrying – I wouldn’t look too closely.” Enough already! I suppose he was joking, but his jokes aren’t really jokes, they’re his attempt at playing off how grumpy and obsessed he is.

Kate wore a new Alexander McQueen coat in grey with a slight plaid pattern. The coat is Kate’s typical style: fitted bodice, lapels, full skirt (which gets her into trouble so frequently). Kate brought back her grey Jane Taylor hat she wore to Easter service in April. Kate wore her Mappin and Webb “Empress” pendant first seen at her last public appearance at the Tower of London Poppy Installation, and her trusty Annoushka Pearl Drop earrings. She also wore her black Prada round toe pumps with a super high heel.

I found the grey of Kate’s coat supremely boring, but I love the hat and thought her hair looked elegant and was out of the way. She should do her hair like this more often. Kate’s jewelry game bored me again, though.

I say the Queen won the style game this round. She looked absolutely wonderful in a navy coat with a navy floral dress underneath, matching navy hat with a giant pink flower, and of course her diamond brooch and pearls (and her smile).

Kate looked well, I think – healthy, and like she’s gained a bit of weight (not too much, she definitely doesn’t have a “bump” yet, but her face and upper body look a bit bigger). Maybe a few more bags under the eyes (more than usual anyway, as she always has a few bags under her eyes), and in some photos she looks grumpy, like barfy maybe (but then again she always looks grumpy when she’s not smiling). She doesn’t look like death warmed over, so hopefully she’ll be back to doing more duties now. 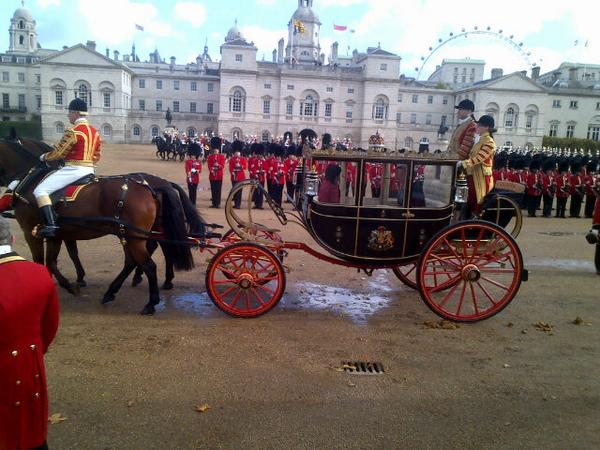 Quotes via the Mirror.