Will, Kate and Harry view the poppy installation at the Tower of London

The young royals continued their WWI commemorative events yesterday at the Tower of London. Prince William, Kate Middleton, and Prince Harry visited the Tower to view the ceramic poppy installation “Blood Swept Lands and Seas of Red” by Paul Cummins. The installation will consist (the last poppy will be placed on November 11) of 888,246 ceramic poppies–one for each British fatality during the war. The poppies are all handmade. The poppies are available to buy for £25, with the proceeds going to six service charities. According to the Royal Historic Palaces website, 10% from each poppy plus all net proceeds will go to the charities. If every poppy sells for £25, they will make £2,220,615 for charity.

Now me being my cynical self, I can’t help but wonder why only 10% of the £25 is actually going to the charities. Does it really cost £22.5 to make each poppy? Where is that money going if not to the charities? Aren’t they using volunteers to make the poppies, they shouldn’t have to pay anyone, right? I realize there is the cost of the product to make each poppy, but does that really cost £22.5 per poppy? That seems like too much for the amount of clay and stain they’re using for each one, right? Is the rest of that money going to the Tower, to fund upkeep and such? If so, then I could get behind that, seeing as preserving that history is important, but if not then all the proceeds should go toward the charities. This is a problem I have with a lot of charities, that most of the money you give is not going toward the people/places/animals you are trying to help. It kind of reminds me of when Kim Kardashian did a ebay sale or something where she auctioned off her clothes “for charity”, but really only donated 10% to charity and kept the rest for herself. Sorry about that rant, I hate to take away from the beauty/sadness that is the installation (it really is a beautiful sight, and sad to think about how many people died), but I always question the way charities are run. I only donate once I’ve really investigated where my money is going. I questioned Sofia Hellqvest’s charity, too. At least the poppy thing is upfront about how much is going to the charity, unlike Sofia’s which is a bit sketchier. That being said, 2 million is a lot of money, I just wish more of the people’s money was going to the actual charities. Anyway, let’s get back to the purpose of the post.

Will, Kate, and Harry toured the installation, met with the representatives of the charities, and each planted a poppy. I have to say, Will and Kate’s jobs are pretty damn cushy. I mean, all they do is show up and chat to people, look around, and get their photos taken. It’s really not that hard at all. I don’t know why they complain so much about it. Is it just that they don’t want to be told what to do, so they rebel against the chusiest job in the world because their parents/grandparents/advisers tell them to do it? What is wrong with them? Huh, I’m really ranty today. Sorry, I didn’t mean to hijack this post with my rants. Let’s do pictures and video.

Kate repeated a blue LK Bennett dress from February–the one that kind of looks like a flight attendant’s outfit because of the lapels. Eh, at least she’s wearing a straight skirt. You know, Kate has a ton of cute dresses but for some reason only repeats ones I’m not in love with recently. I wish she’d dig around in that gigantic closet of hers and brings back some of the cute pieces from a few years ago. Kate brought back her Stuart Weitzman navy Muse clutch and sapphire and diamond Diana earrings. Kate wore a new pair of navy suede Jimmy Choo heels. Kate has other navy suede heels, but these have a thicker heel. Kate has about three different pairs each of navy suede pumps, black pumps, and nude pumps (for the nudes, I think she had way more than three pairs). I hate to get all picky, but she really needs to up her shoe game. I know there are royal protocols about footwear, but still, she could have more fun with it. I guess she’s not a shoe person. Another new piece was her necklace; it’s Mappin and Webb “Empress Mini White Gold and Diamond” pendant, which retails for £1,850. It’s cute, much better than the other Mappin and Webb necklace she has. PS. She really likes blue, doesn’t she. 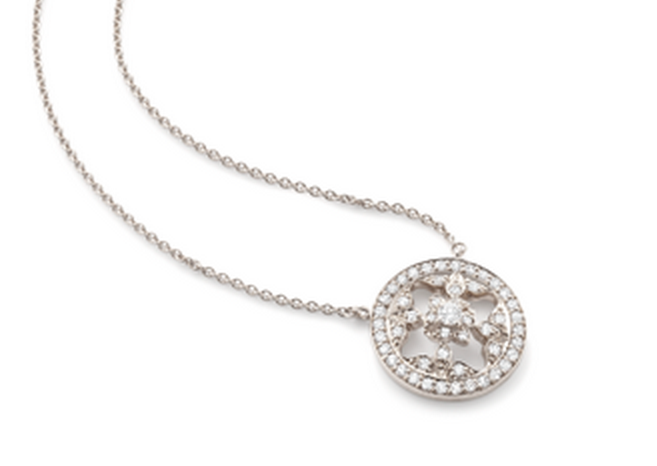 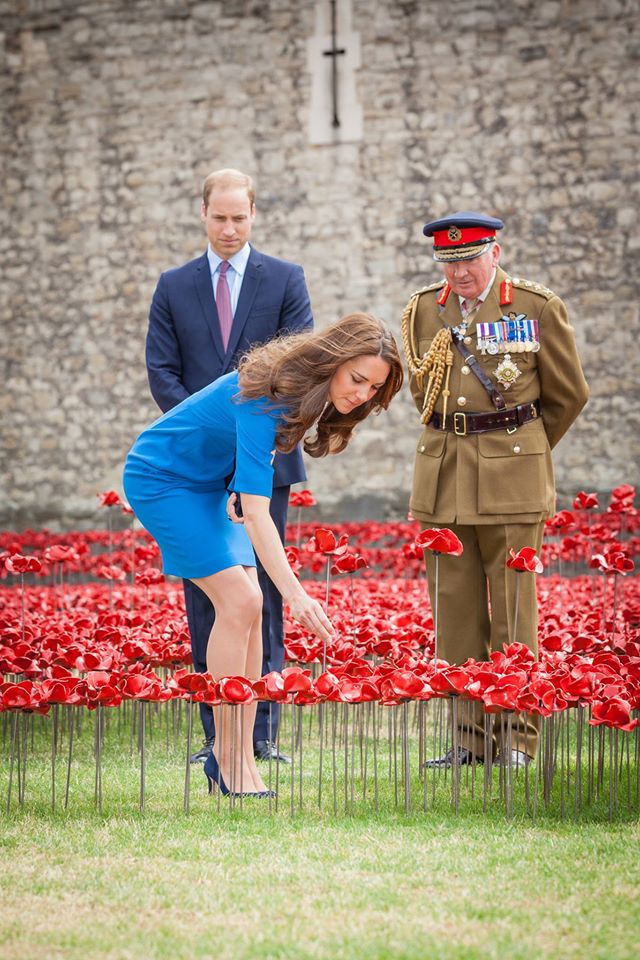 Kate at one point touched her face under her eye. The press latched on to the “she was wiping a tear” thing, but she could have just been brushing an eyelash or something. Who knows. Hopefully it was real emotion. PS. The Ginger in a suit doesn’t do it for me for some reason. Usually I love a man in a suit but Harry looks best in a polo shirt.

For kicks, here’s Kate being greeted by one of the escorts. Not only did the woman curtsy to Kate, which is funny, but they wore the same color. Twinsies!

Some pictures of Will, Kate and Harry walking through the poppies. 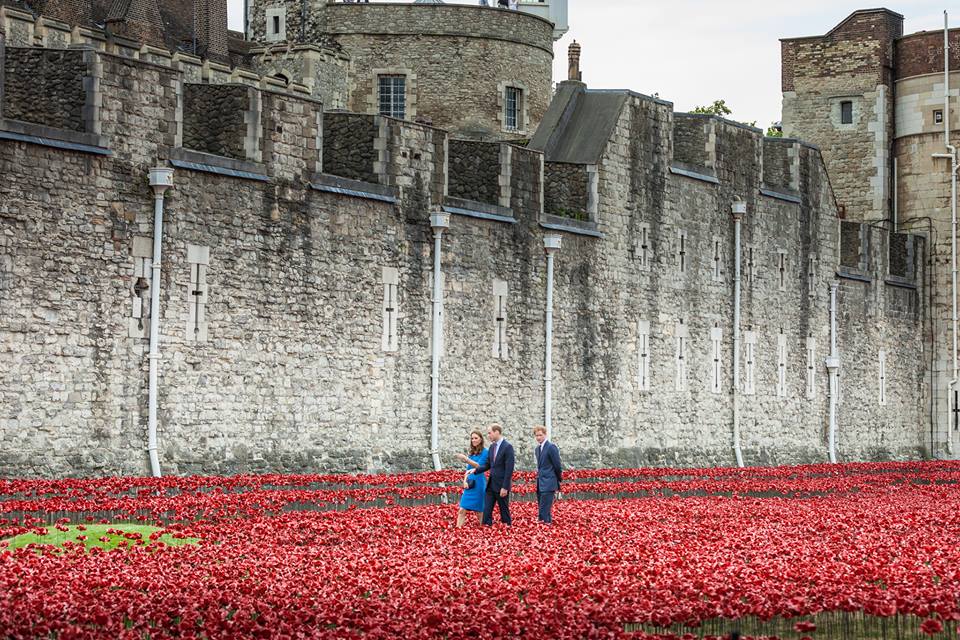 God Kate’s posture is terrible. Like, I used to make fun of her for it, but now I just feel badly for her. She really needs to correct that, it’s going to cause her terrible pain. She looks halfway to my Aunt Jean, who had osteoporosis and was super hunched over. 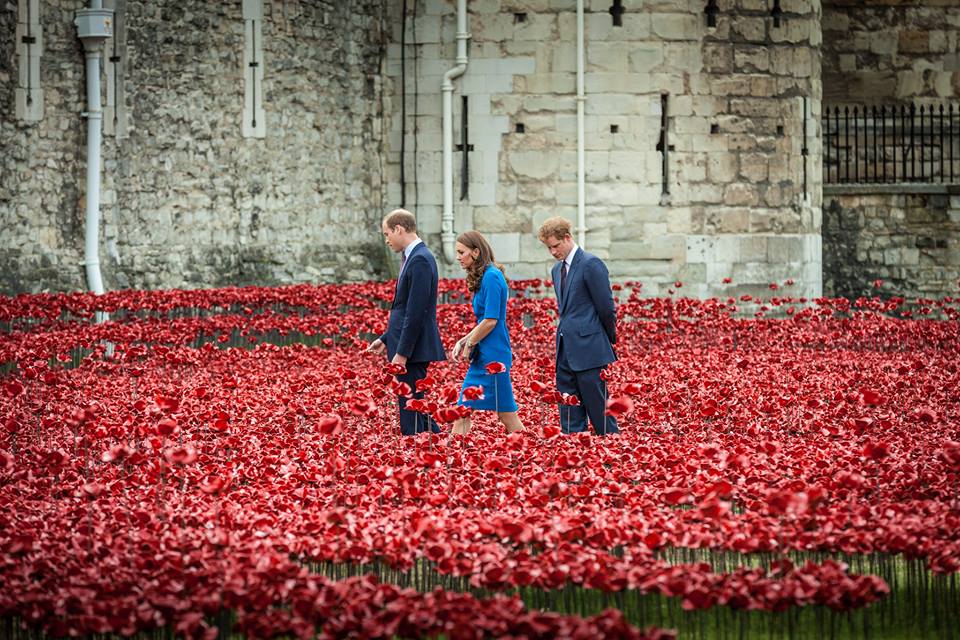 A view of the poppies at the Tower and how enormous the installation is. 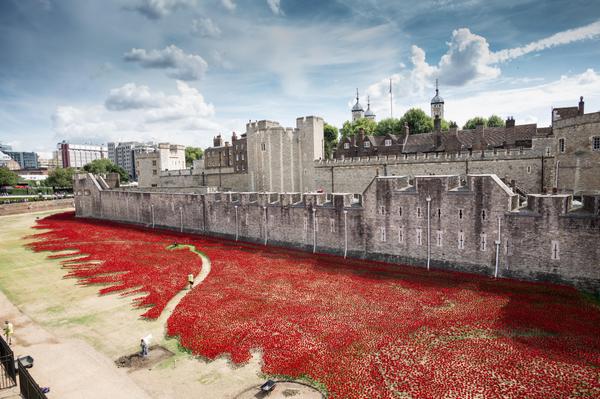 Here’s a video about the poppy making.

54 thoughts on “Will, Kate and Harry view the poppy installation at the Tower of London”