Kate, Will and Harry mark the 100th anniversary of the start World War I in Belgium

Kate Middleton Prince Harry Prince William
August 5, 2014August 5, 2014 by katemiddletonreview27 Comments on Kate, Will and Harry mark the 100th anniversary of the start World War I in Belgium

On August 4, 1914, after a tense summer of an assassination that led to backroom deals being called upon and will-they/won’t-they troop movement, Germany invaded neutral Belgium and attacked the city of Liege, prompting Britain to declare war on Germany, starting a four year war that ended with millions of deaths and many more millions of injuries. World War I has the highest death toll of dead and injured servicemen. World War I changed the face of Europe, resulting in the collapse of monarchies and empires: Austro-Hungarian Empire (collapsed and was dissolved in 1918 after their defeat); Ottoman Empire (wasn’t officially abolished until 1922, but due to the defeat in 1918 it was partitioned and weakened); Russian imperial family, the Romanovs (Russia’s partaking in WWI led to the Russian Revolution in 1917, causing Russsia to exit the war); German empire, House of Hohenzollerns (in 1918 the German empire was abolished and replaced by the Weimar Republic).

To commemorate the 100th anniversary of the start of World War I, Belgium held a number of ceremonies in Liege and Mons, attended by numerous heads of state and other dignitaries. Britain’s representatives were Prince William, Duke of Cambridge, and Kate Middleton, Duchess of Cambridge. Prince Harry joined the commemorative events in Mons. King Philippe and Queen Mathilde of Belgium presided over the events.

The day began with William and Kate arriving in Liege at the Saint-Laurent Abbey and were greeted by Philippe and Mathilde. 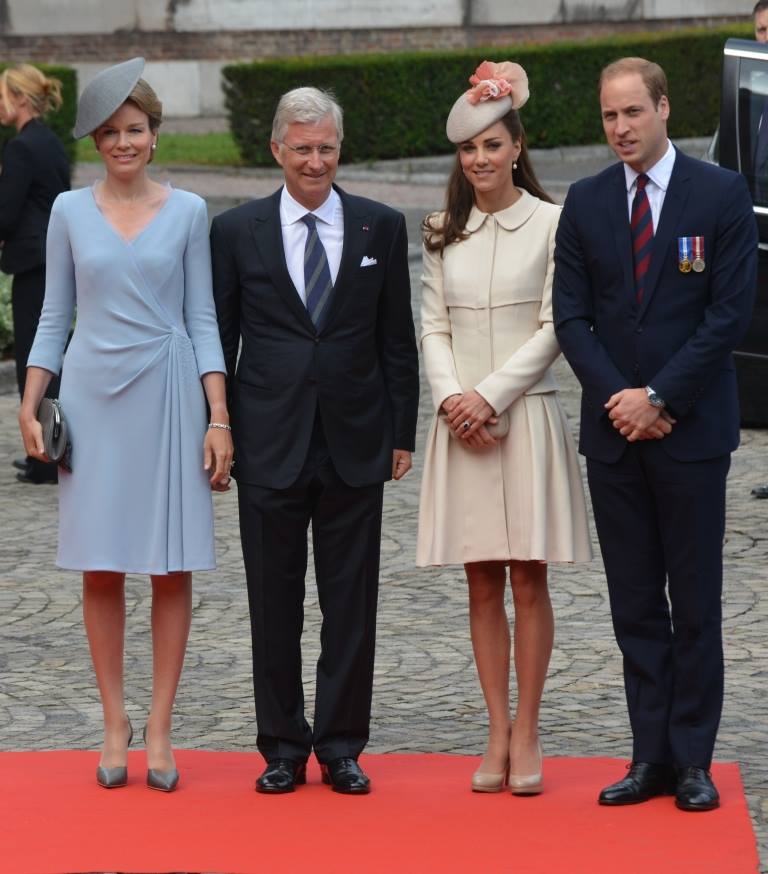 There was a commemorative event at the Cointe Inter-allied Memorial at which many of the world leaders and Prince William spoke (you can read William’s speech in it’s entirety here). Below is a Telegraph video showing Will and Kate greeting Philippe and Mathilde–Philippe and Mathilde outrank Kate, and so she had to curtsy–and a part of Will’s speech at the end. William mentioned Ukraine, and the crisis there with Russia, saying that the instability that led to WWI still exists in Europe. I’m surprised he mentioned it, but he’s not the first to mention the happenings in Ukraine in relation to the World Wars. We’ll have to see what happens there; fingers crossed it doesn’t end poorly.

At the event, Kate sat next to French President Francois Hollande. I wonder what they talked about.

There was a lunch reception afterward. 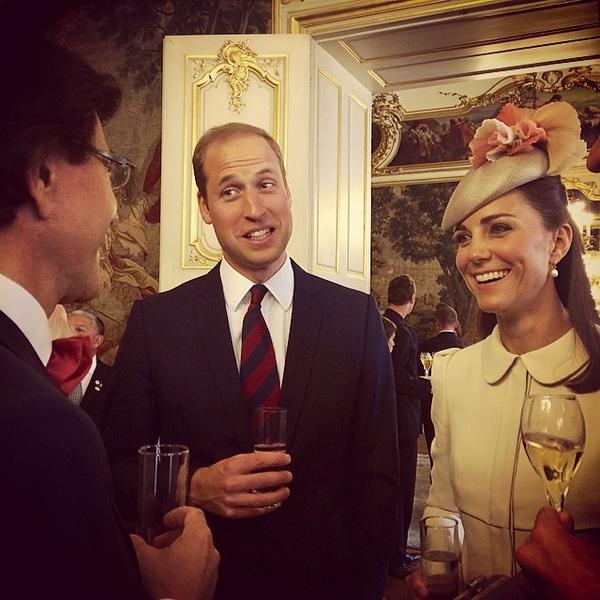 The next stop of the day was Mons Town Hall where Will and Kate were joined by Harry. They viewed pictures and exhibits of World War I. There was a balcony appearance as well. Below is Kate signing the Town Hall register and a balcony picture. 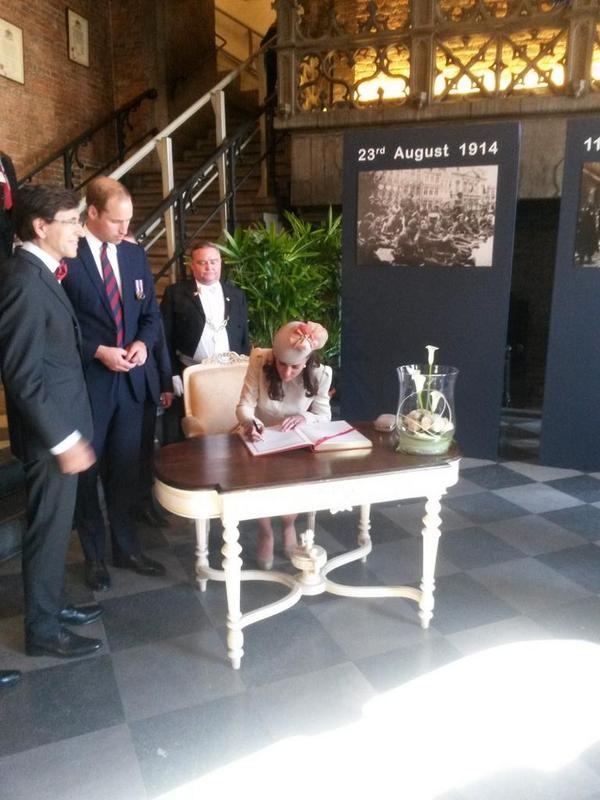 Then they went to Saint Symphorien Military Cemetary, where military dead from both sides are buried. Philippe, Mathilde, Will, Kate, and Harry were joined by British Prime Minister David Cameron.

Kate curtsying to Philippe. I don’t know why, but I get a kick out of it whenever anyone curtsies.

The group walked through the war graves before attending another event with more speeches.

There was an evening ceremony in which Philippe, Cameron and William laid flowers on an obelisk memorial. Kate, Harry, and the Archbishop of Canterbury, Justin Welby, placed lamps on the memorial.

There were a number of other events to mark the centenary across Britain, which the other royals attended. I’m not sure why the Queen did not attend the big one in Belgium with the other heads of state. Either the Queen or Charles should have attended, rather than the second in line. But Will and Kate needed to do something, and I guess since they get more media coverage than the Queen or Charles, it makes sense to send them to the event that should have gotten the most coverage.

I’m including this picture because I just love it, don’t know why.

27 thoughts on “Kate, Will and Harry mark the 100th anniversary of the start World War I in Belgium”