Kate made an appearance at Northolt High School in London to open a new ICAP Art Room today.  Kate was greeted by the students in the gym before talking to the staff and observing a short art session.  She then cut the ribbon to officially open the Art Room. 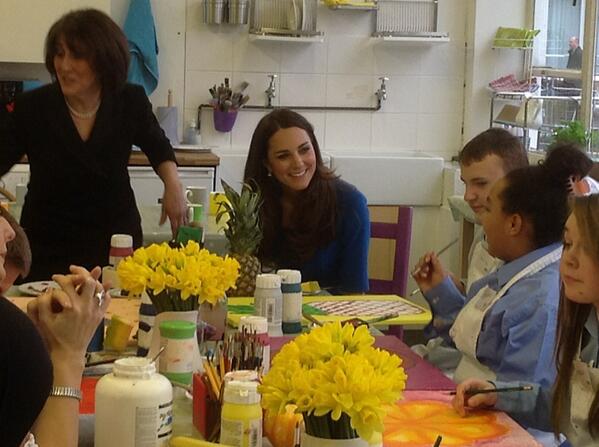 The Art Room is a national charity that offers art as a therapy for people aged five to 16 who are facing challenges in their lives.  The program helps young people grow in self-confidence and self-esteem and engage in their education.

Kensington Palace said Kate chose this charity as it “reflects her interest in the arts and her particular interest in using the creativity of art to enrich the lives of young people.”  Of course, Kate doesn’t really have an interest in art.  She only did art history because Will originally did that, and she hasn’t shown any interest in or even knowledge about art since she’s been a Duchess.  But sure, interest in art.

Jonathan Lloyd-Jones (the chairman of the trustees) said: “The Duchess has taken a genuine interest in what we have done. It has been a real commitment on her part and we feel very privileged.”  I have to side-eye this statement.  Of course he isn’t going to publicly bad mouth her, but what “genuine interest” and “real commitment” has she shown?  She opens a few Art Rooms and visits a few times, but really, that’s it.  It’s not like she’s really involved.

Interesting to note, this Art Room was funded by donations made by City of London brokers on ICAP Charity Day in December 2012, which Kate did not attend because of her fake HG.

UPDATE: I just saw some quotes from people who meet Kate: Gloria Lowe (who chaperoned Kate around) said, “[Kate] really cares… She praised the work in the Art Room, and she was moved and impressed by what she has seen. She’s a wonderful human being… She’s enjoying motherhood… [Kate was] incredibly personable, human and anecdotal about her own interests.” Emma Lowe said, “[The students] were nervous to begin with, but as soon as [Kate] started talking to them about their work and focusing on their art, they were put at ease.” Carly McCormack (a student) said, “[Kate] was amazing… She asked us our names and what we were interested in. She was so easy to talk to.” LOL that she has to say Kate is human. Ugh, I hate that I don’t believe all of this. Of course they are going to say nice things about her to the press, they can’t very well say she was rude or wooden or didn’t take an interest. She’s their patron and they want to keep her. But maybe she was interested and nice and whatever. I hope so, for the Art Room’s sake. /UPDATE.

Kate wore a blue LK Bennett dress that cost about £225/$395.  I kind of like the dress.  I think it is appropriate for a school visit.  It’s to the knee (or just above—might be a bit short actually) and isn’t a flowy skirt that could expose her bum if there was wind.  And it was windy as she walked in, so good choice in type of dress.  It’s got a faux jacket-like lapel thing, which… I don’t know, the jury is still out on that one for me.  I don’t think it’s my favorite dress or anything, but I could see myself wearing it to work—it’s to the knee, the arms are covered and there isn’t any cleavage.  The color looks good on her.  She really needs to wear more vibrant colors—royal blue, red, and dark purple look the best on her.  Kate also wore black pumps and carried a black clutch.

As for jewelry, Kate wore a Cartier watch.  WhatKateWore says it’s new.  Maybe a Valentine’s Day gift from William?  The watch is priced at $6,000.  Kate also wore a £3950 (roughly $6,600) Mappin & Webb necklace she’s worn a few times now.  She wore Kiki McDonough Green Amethyst and Diamond Cushion Drop earrings worth £1,200 (roughly $2,000) which are also new.  Kate was also spotted wearing a small platinum and diamond band on her ring finger with her wedding band and engagement ring.  She was seen wearing this ring at the Portrait Gala, too.  So maybe that was a Christmas gift?

Overall, Kate wore $14,600 worth of jewelry—and that doesn’t include her platinum/diamond band—and a $14,995 outfit (not including clutch and shoes).  Damn.  Granted, the necklace is a repeat, but still.

On a related note, Kate took George and Lupo for a walk yesterday (Thursday).  She even picked up Lupo’s dog sh-t when he took a dump on the grass.  She again didn’t put Lupo on a leash—wtf, aren’t there leash laws in London?  And again, no protection officers in the photos–even though they had to have been there.  Seriously, she must be calling the paps for these “hands on mom taking her son to the park” excursions, because we get photos every single time.  Dear Kate, no matter how many happy-family/taking-your-son-for-a-walk photo ops you give us, we still aren’t going to believe you’re fully hands on and don’t have, like, three nannies.

PS.  Some things I noticed:  Kate has horrible posture (see video for evidence)—I already knew this, but she hasn’t worked on it at all.  Kate needs to stop touching her hair—again, I already knew this, but it needs to be repeated because she keeps doing it.  Kate needs to shut her mouth—we really don’t need to see her tonsils.  Kate really needs to stop jutting out her jaw—if only so it doesn’t cause her jaw problems.

Here is a video of Kate at the Art Room: