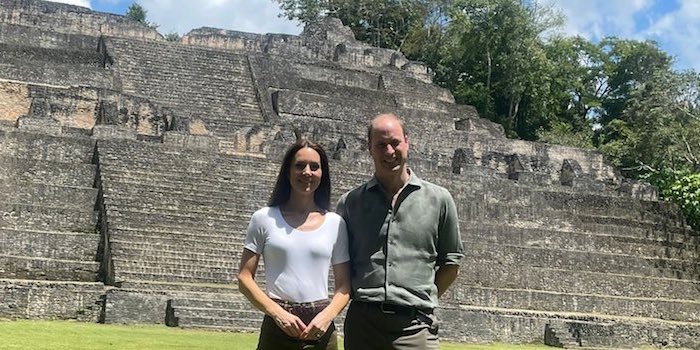 Prince William and The Duchess of Cambridge kicked off their 3rd day in Belize, yesterday March 21, visiting Caracol Maya site before visiting a British Army Training Support Unit (BATSUB) in the Chiquibul Forest. The couple ended their day with a reception hosted by the Governor-General of Belize.

William and Kate visited and climbed to the top of Caana (“sky-palace”) which is the largest building at Caracol, and is the tallest manmade structure in Belize even today. Caracol is the largest Maya site in Belize and is five times larger than the largest city in the country, Belize City. The site was founded in 1200 BCE, but was only rediscovered in 1937 by a logger.

Kate wore a causal look for the visit to Caracol – wearing a white shirt and khaki trousers.

The couple then visited a British Army Training Support Unit (BATSUB) in the Chiquibul Forest, at which William previously attended training with the Welsh Guards in 2000.

William and Kate spent more than an hour and a half being taken on a crash course in survival techniques taught to British soldiers who spend six to eight weeks in the Belize jungle as part of their training.

Arriving at the BATSUB HQ, dubbed ‘The Schoolhouse’, the couple were briefed on the five main pillars of survival in the environment, namely cooking; animal traps; shelters; water capture and fire.

Before the Duke and Duchess’s arrival, BATSUB squaddies spent five days cleaning a portion of the jungle with machetes to set up camp and give the royals “an truly authentic jungle experience”.

William and Kate were shown how to boil water using a plastic bottle dangling over a fire, fashion a bamboo tree to use as a pressure cooker and sharpen a bamboo spear to create a medieval type weapon to trap and kill monkeys and birds to eat.

After returning from the Caracol and training unit, William and Kate attended a reception at the Cahal Pech Maya site, hosted by the Governor-General Froyla Tzalam in celebration of the Platinum Jubilee.

The Cahal Pech site was the home of a an elite Maya family and was originally inhabited around 1200 BCE. The primary excavation of the site began in 1988 and was completed in 2000.

William gave a speech at the reception (the text of which has annoyingly not been posted by KP as of time of writing).

Speaking in the shadow of the Maya ruins at Cahal Pech, near San Ignacio, at a reception hosted by the Governor General Froya Tzalam, William quoted from the Queen’s 1994 speech.

He told the guests: “She said ‘I am proud to associate myself with your determination that social justice and personal freedom should flourish under the rule of law. It is always dangerous, however, to be complacent and to assume that democratic values will look after themselves. Vigilance in protecting them is needed’.” […]

In his speech delivered in the early hours, he added: “Her Majesty went on to say that ‘Most of all, democracy is safe-guarded by teamwork – the individual wills of all citizens, each pulling together towards the same objective’. Sadly, elsewhere in the world, that vigilance is being tested today in Ukraine. Belize has joined many others in condemning the invasion and standing up for the principles of international law, peace and security. Today we think of those struggling in Ukraine and we stand with them in solidarity.” […]

The duke also passed on the “very warmest wishes from my grandmother, the Queen of Belize”, on the occasion of her Platinum Jubilee.

Speaking about his son George during the reception held to mark the Queen’s Platinum Jubilee, the duke said “We let them know where we are and he finds us on the map and puts a pin in it and shares with the others.” […]

In his speech William also highlighted Belize’s fight against Covid telling the guests: “The last two years of the Covid-19 pandemic have been hugely challenging but it is reassuring to have heard from so many people that things are on the up.”

For the evening reception, Kate wore a new metallic pink silk-lamé gown from The Vampire’s Wife, along with a Maya embroidered handbag. She wore her O’NITAA earrings first worn in Pakistan in 2019. She wore her hair straightened with a center part.

I’m not the biggest fan of this metallic fabric, but I think Kate looks very nice here.

A few more photos from the Caracol:

Some more photos from the training unit visit:

A couple more photos from the reception: